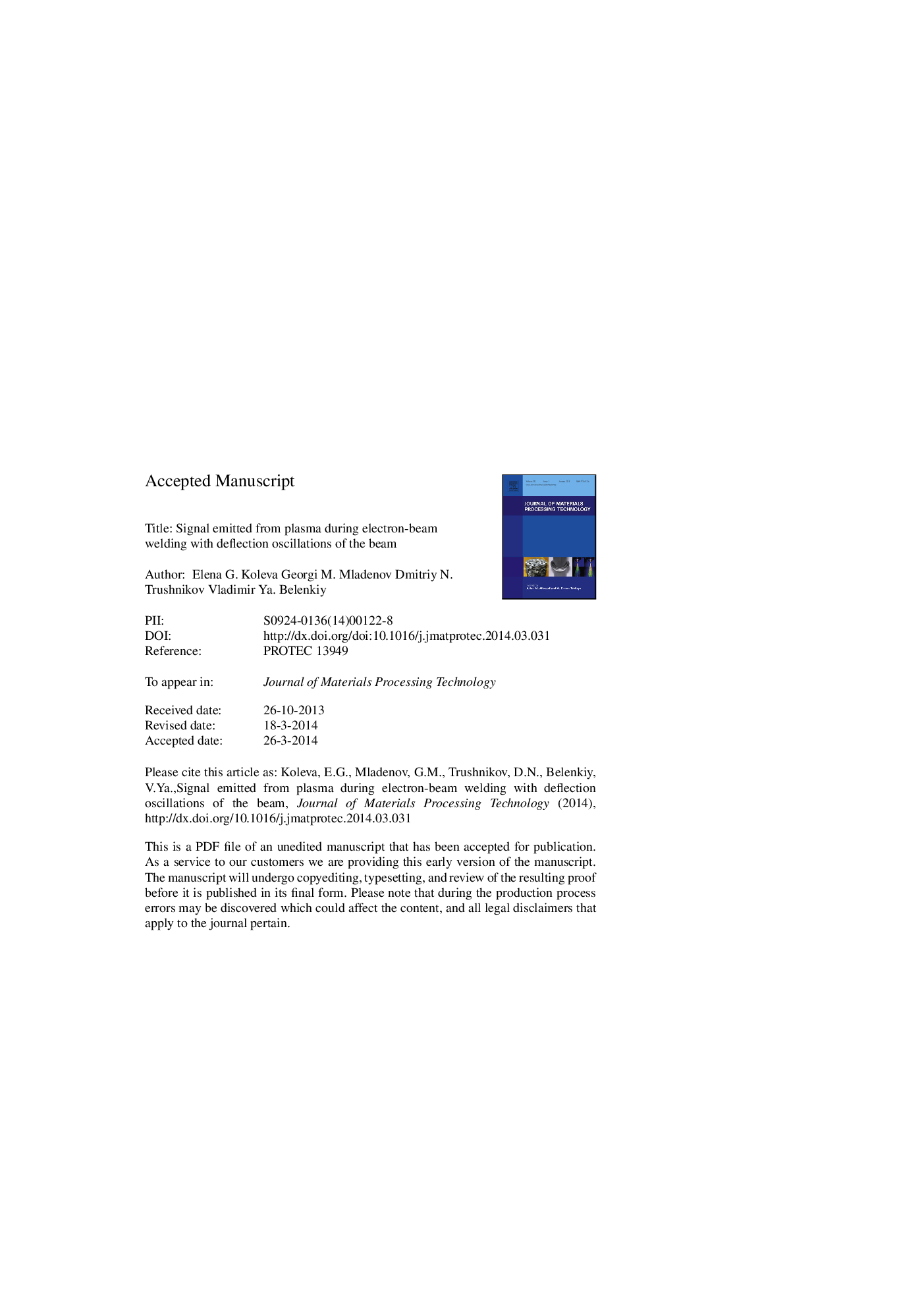 چکیده انگلیسی
The oscillations of a signal, collected by a ring electrode with +50Â V potential, situated in the plasma over the welding zone during electron beam welding (EBW) with local beam deflection oscillations were studied. Samples of chrome-molybdenum steel were processed. The frequencies of the beam oscillations varied between 150 and 1400Â Hz and their trajectories were the simplest: along and across the joint. The position of the beam focus was changed. Fluctuations of the emitted plasma current by coherent accumulation of the signal amplitudes were analysed and the probability for instability excitations in the keyhole was estimated. This method allows the study of the random instability processes at the interaction of the beam with the keyhole wall and bottom. A time shift between the maxima of the function derived from the coherent accumulation and the extremes of the deflection coil current was found. This shift depends on the beam focus position. In addition, at longitudinal beam oscillations, and at variations of the focus position a difference of the extreme values of the studied signal was observed. At the lowest values of the current of the focusing electromagnetic lens, the differences between the maxima of the probabilities for excitation of the plasma signal oscillations in the moments at beam bombardment on the front and trailing walls of the keyhole in the molten pool were about 30%, while the beam over-focusing decreased these differences. For beams situated at the central part of the keyhole, the collected signal was minimal. From the observations of spikes in the weld root, at EBW with deflection oscillations, it was concluded that self-focusing of the beam in the bottom part of the keyhole in the cases of the most focusing positions was occurring.
ناشر
Database: Elsevier - ScienceDirect (ساینس دایرکت)
Journal: Journal of Materials Processing Technology - Volume 214, Issue 9, September 2014, Pages 1812-1819
نویسندگان
Elena G. Koleva, Georgi M. Mladenov, Dmitriy N. Trushnikov, Vladimir Ya. Belenkiy,
دانلود مقاله + سفارش ترجمه
دانلود مقاله ISI انگلیسی
رایگان برای ایرانیان
سفارش ترجمه تخصصی
با تضمین قیمت و کیفیت
منتشر شده در