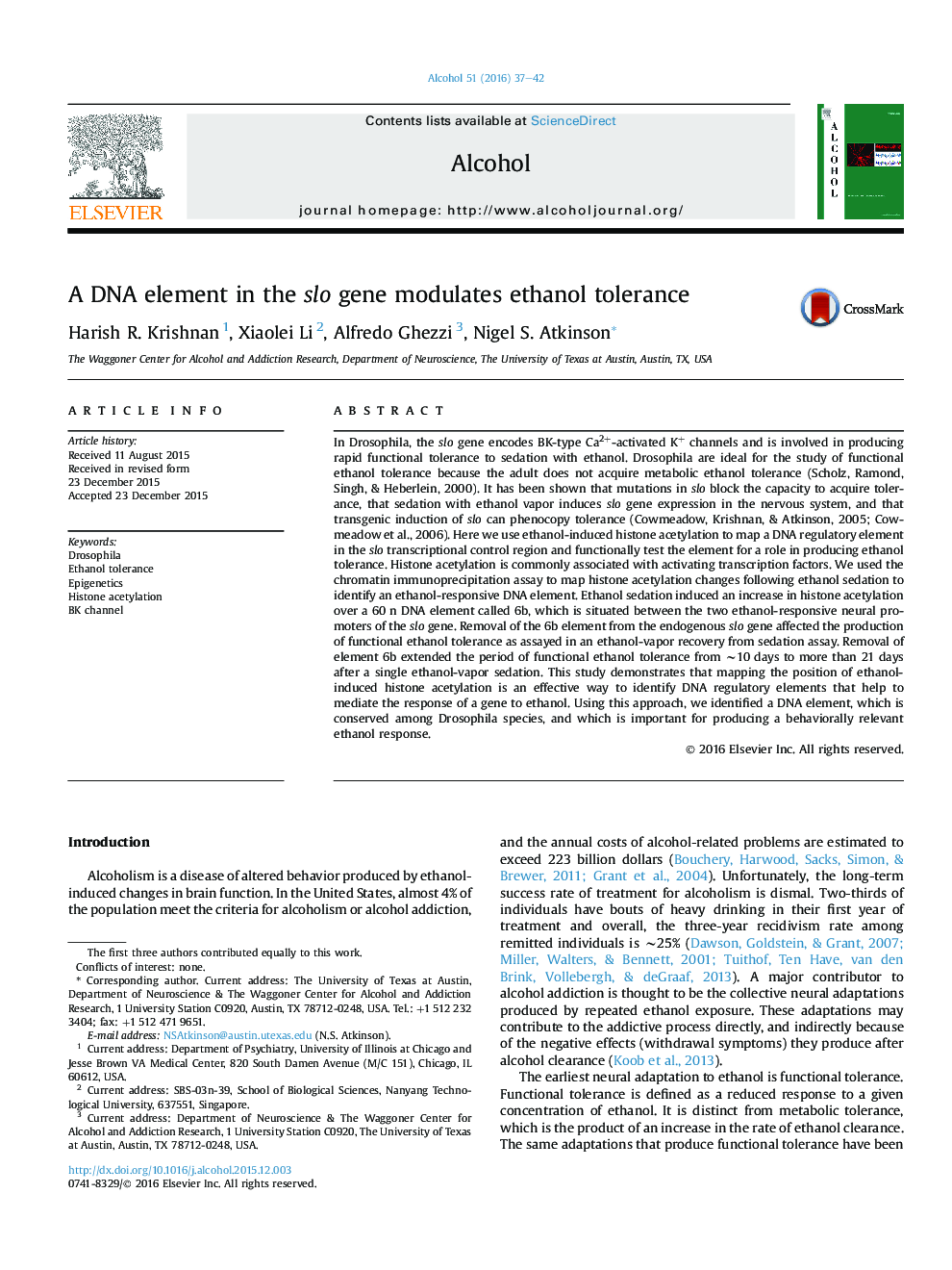 • Histone acetylation identifies an ethanol-responsive DNA element.
• Deletion of the element from the slo gene changes an ethanol-induced behavior.
• Removal of a regulatory element increases functional behavioral tolerance to ethanol.

In Drosophila, the slo gene encodes BK-type Ca2+-activated K+ channels and is involved in producing rapid functional tolerance to sedation with ethanol. Drosophila are ideal for the study of functional ethanol tolerance because the adult does not acquire metabolic ethanol tolerance (Scholz, Ramond, Singh, & Heberlein, 2000). It has been shown that mutations in slo block the capacity to acquire tolerance, that sedation with ethanol vapor induces slo gene expression in the nervous system, and that transgenic induction of slo can phenocopy tolerance (Cowmeadow, Krishnan, & Atkinson, 2005; Cowmeadow et al., 2006). Here we use ethanol-induced histone acetylation to map a DNA regulatory element in the slo transcriptional control region and functionally test the element for a role in producing ethanol tolerance. Histone acetylation is commonly associated with activating transcription factors. We used the chromatin immunoprecipitation assay to map histone acetylation changes following ethanol sedation to identify an ethanol-responsive DNA element. Ethanol sedation induced an increase in histone acetylation over a 60 n DNA element called 6b, which is situated between the two ethanol-responsive neural promoters of the slo gene. Removal of the 6b element from the endogenous slo gene affected the production of functional ethanol tolerance as assayed in an ethanol-vapor recovery from sedation assay. Removal of element 6b extended the period of functional ethanol tolerance from ∼10 days to more than 21 days after a single ethanol-vapor sedation. This study demonstrates that mapping the position of ethanol-induced histone acetylation is an effective way to identify DNA regulatory elements that help to mediate the response of a gene to ethanol. Using this approach, we identified a DNA element, which is conserved among Drosophila species, and which is important for producing a behaviorally relevant ethanol response.