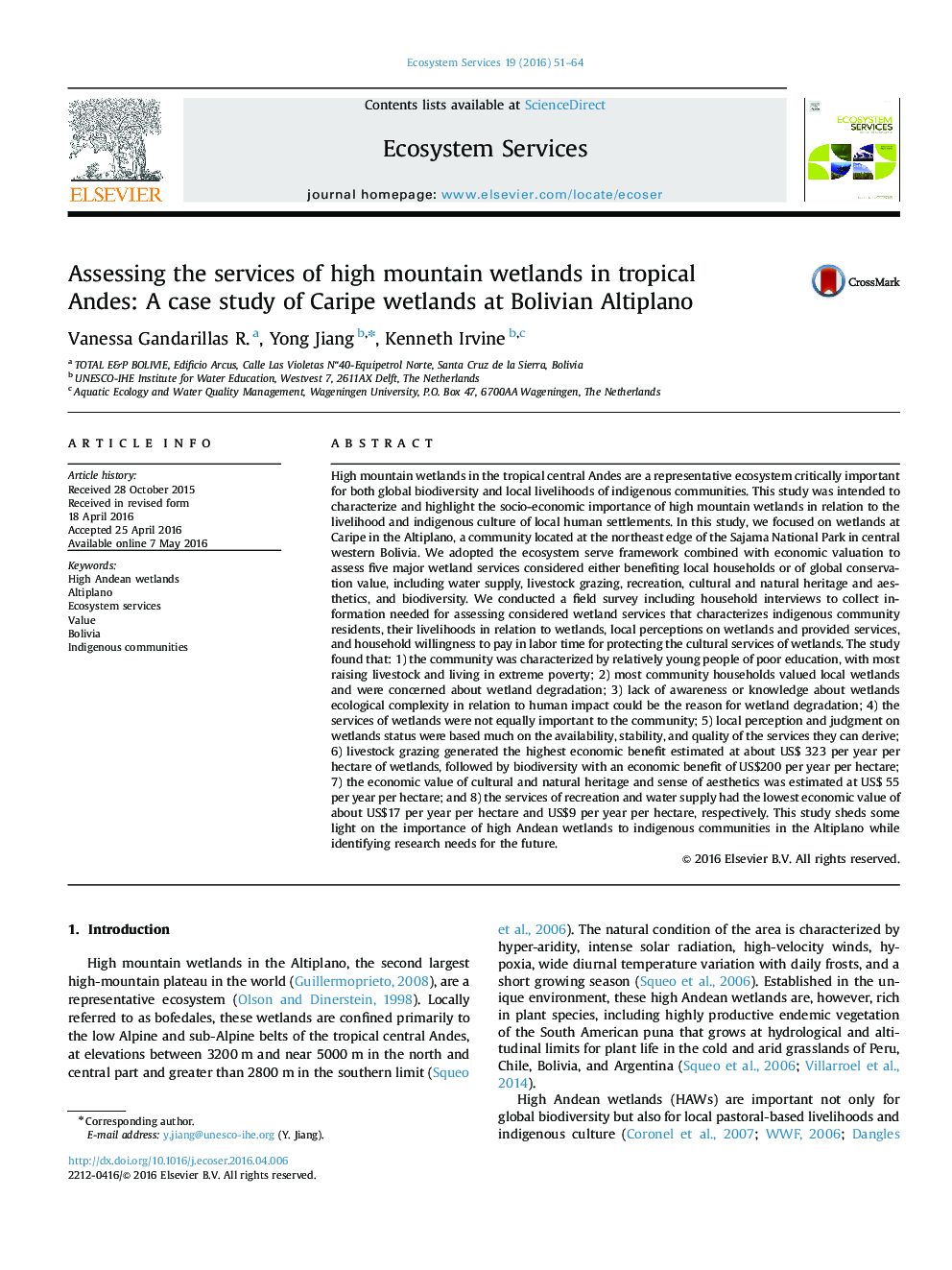 High mountain wetlands in the tropical central Andes are a representative ecosystem critically important for both global biodiversity and local livelihoods of indigenous communities. This study was intended to characterize and highlight the socio-economic importance of high mountain wetlands in relation to the livelihood and indigenous culture of local human settlements. In this study, we focused on wetlands at Caripe in the Altiplano, a community located at the northeast edge of the Sajama National Park in central western Bolivia. We adopted the ecosystem serve framework combined with economic valuation to assess five major wetland services considered either benefiting local households or of global conservation value, including water supply, livestock grazing, recreation, cultural and natural heritage and aesthetics, and biodiversity. We conducted a field survey including household interviews to collect information needed for assessing considered wetland services that characterizes indigenous community residents, their livelihoods in relation to wetlands, local perceptions on wetlands and provided services, and household willingness to pay in labor time for protecting the cultural services of wetlands. The study found that: 1) the community was characterized by relatively young people of poor education, with most raising livestock and living in extreme poverty; 2) most community households valued local wetlands and were concerned about wetland degradation; 3) lack of awareness or knowledge about wetlands ecological complexity in relation to human impact could be the reason for wetland degradation; 4) the services of wetlands were not equally important to the community; 5) local perception and judgment on wetlands status were based much on the availability, stability, and quality of the services they can derive; 6) livestock grazing generated the highest economic benefit estimated at about US$ 323 per year per hectare of wetlands, followed by biodiversity with an economic benefit of US$200 per year per hectare; 7) the economic value of cultural and natural heritage and sense of aesthetics was estimated at US$ 55 per year per hectare; and 8) the services of recreation and water supply had the lowest economic value of about US$17 per year per hectare and US$9 per year per hectare, respectively. This study sheds some light on the importance of high Andean wetlands to indigenous communities in the Altiplano while identifying research needs for the future.