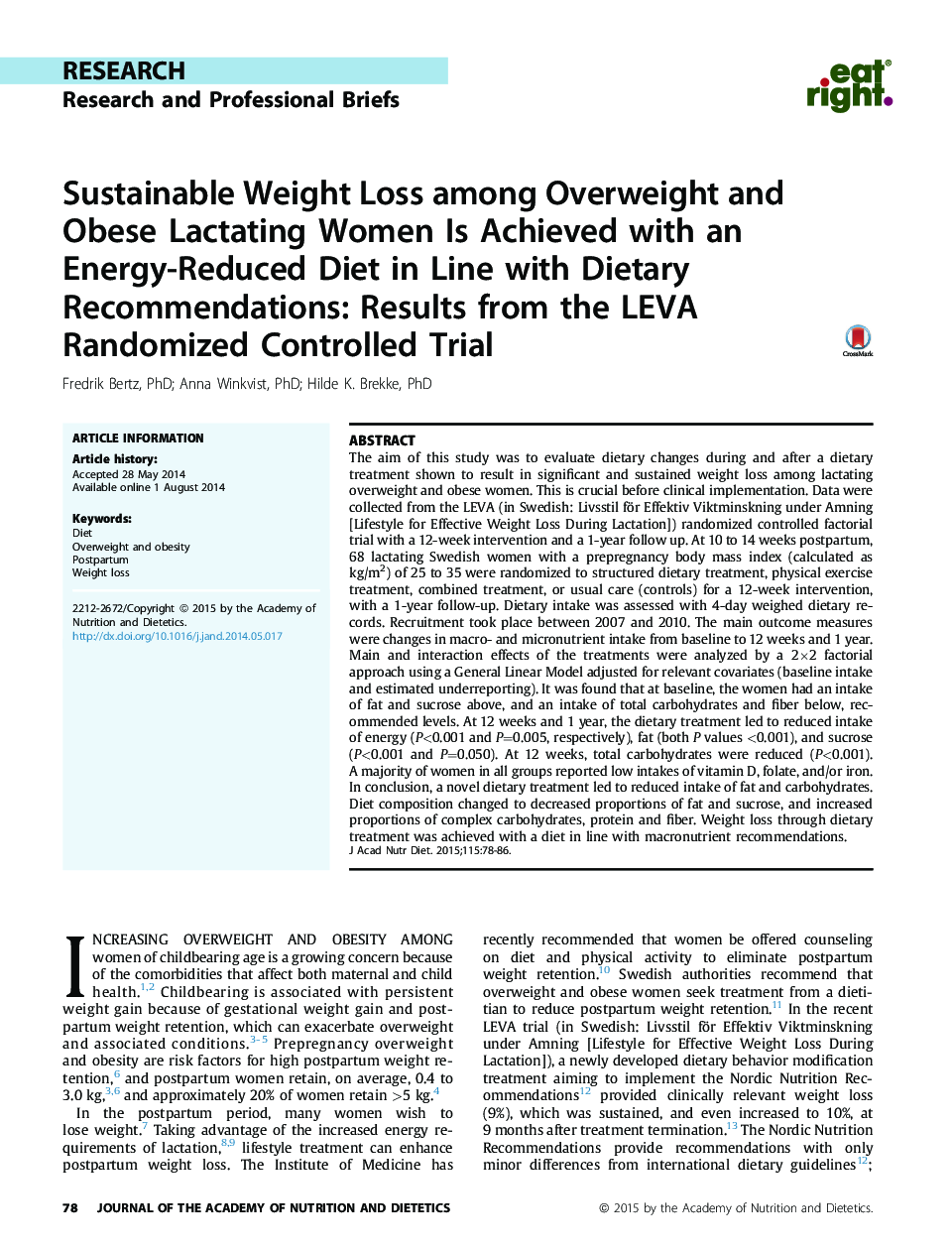 The aim of this study was to evaluate dietary changes during and after a dietary treatment shown to result in significant and sustained weight loss among lactating overweight and obese women. This is crucial before clinical implementation. Data were collected from the LEVA (in Swedish: Livsstil för Effektiv Viktminskning under Amning [Lifestyle for Effective Weight Loss During Lactation]) randomized controlled factorial trial with a 12-week intervention and a 1-year follow up. At 10 to 14 weeks postpartum, 68 lactating Swedish women with a prepregnancy body mass index (calculated as kg/m2) of 25 to 35 were randomized to structured dietary treatment, physical exercise treatment, combined treatment, or usual care (controls) for a 12-week intervention, with a 1-year follow-up. Dietary intake was assessed with 4-day weighed dietary records. Recruitment took place between 2007 and 2010. The main outcome measures were changes in macro- and micronutrient intake from baseline to 12 weeks and 1 year. Main and interaction effects of the treatments were analyzed by a 2×2 factorial approach using a General Linear Model adjusted for relevant covariates (baseline intake and estimated underreporting). It was found that at baseline, the women had an intake of fat and sucrose above, and an intake of total carbohydrates and fiber below, recommended levels. At 12 weeks and 1 year, the dietary treatment led to reduced intake of energy (P<0.001 and P=0.005, respectively), fat (both P values <0.001), and sucrose (P<0.001 and P=0.050). At 12 weeks, total carbohydrates were reduced (P<0.001). A majority of women in all groups reported low intakes of vitamin D, folate, and/or iron. In conclusion, a novel dietary treatment led to reduced intake of fat and carbohydrates. Diet composition changed to decreased proportions of fat and sucrose, and increased proportions of complex carbohydrates, protein and fiber. Weight loss through dietary treatment was achieved with a diet in line with macronutrient recommendations.