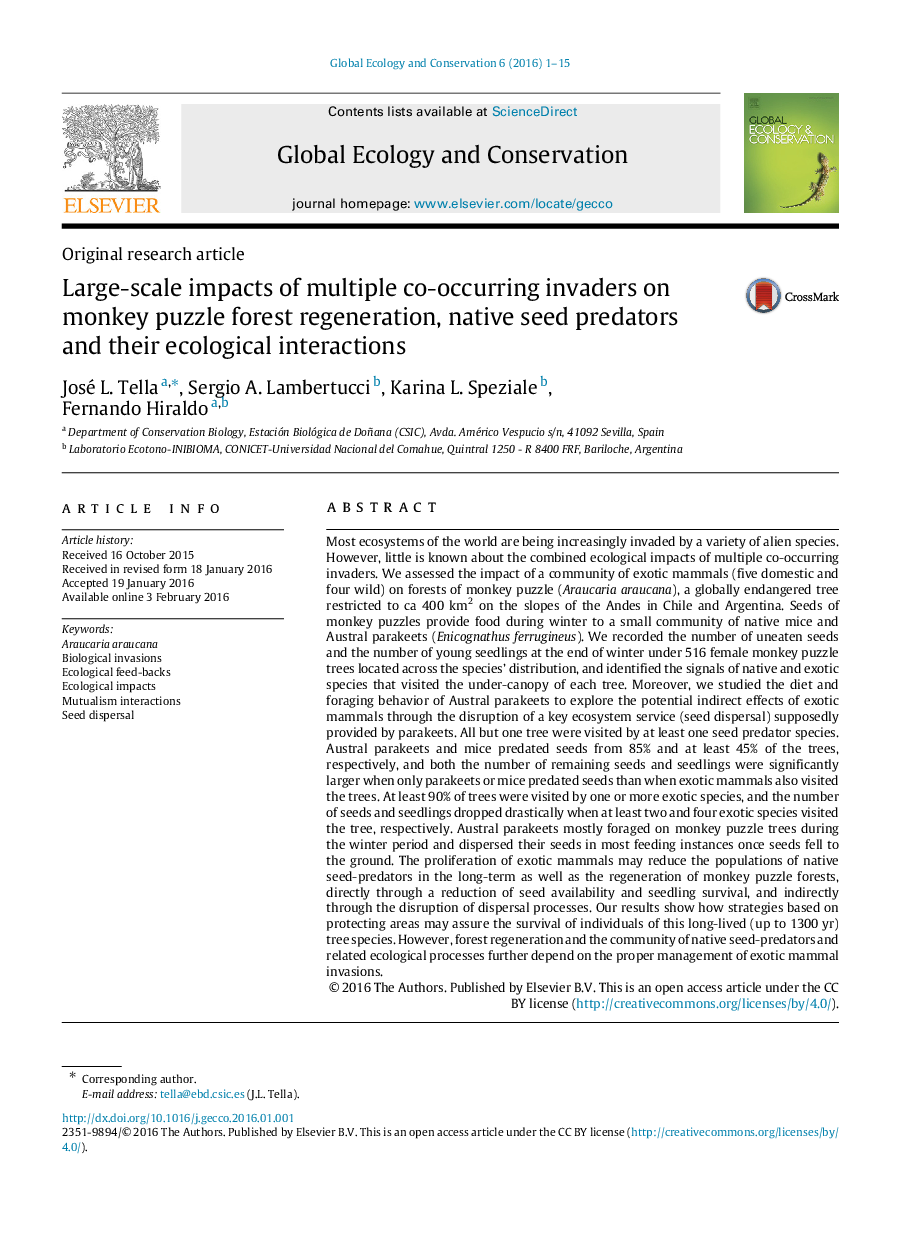 Most ecosystems of the world are being increasingly invaded by a variety of alien species. However, little is known about the combined ecological impacts of multiple co-occurring invaders. We assessed the impact of a community of exotic mammals (five domestic and four wild) on forests of monkey puzzle (Araucaria araucana  ), a globally endangered tree restricted to ca 400 km22 on the slopes of the Andes in Chile and Argentina. Seeds of monkey puzzles provide food during winter to a small community of native mice and Austral parakeets (Enicognathus ferrugineus). We recorded the number of uneaten seeds and the number of young seedlings at the end of winter under 516 female monkey puzzle trees located across the species’ distribution, and identified the signals of native and exotic species that visited the under-canopy of each tree. Moreover, we studied the diet and foraging behavior of Austral parakeets to explore the potential indirect effects of exotic mammals through the disruption of a key ecosystem service (seed dispersal) supposedly provided by parakeets. All but one tree were visited by at least one seed predator species. Austral parakeets and mice predated seeds from 85% and at least 45% of the trees, respectively, and both the number of remaining seeds and seedlings were significantly larger when only parakeets or mice predated seeds than when exotic mammals also visited the trees. At least 90% of trees were visited by one or more exotic species, and the number of seeds and seedlings dropped drastically when at least two and four exotic species visited the tree, respectively. Austral parakeets mostly foraged on monkey puzzle trees during the winter period and dispersed their seeds in most feeding instances once seeds fell to the ground. The proliferation of exotic mammals may reduce the populations of native seed-predators in the long-term as well as the regeneration of monkey puzzle forests, directly through a reduction of seed availability and seedling survival, and indirectly through the disruption of dispersal processes. Our results show how strategies based on protecting areas may assure the survival of individuals of this long-lived (up to 1300 yr) tree species. However, forest regeneration and the community of native seed-predators and related ecological processes further depend on the proper management of exotic mammal invasions.