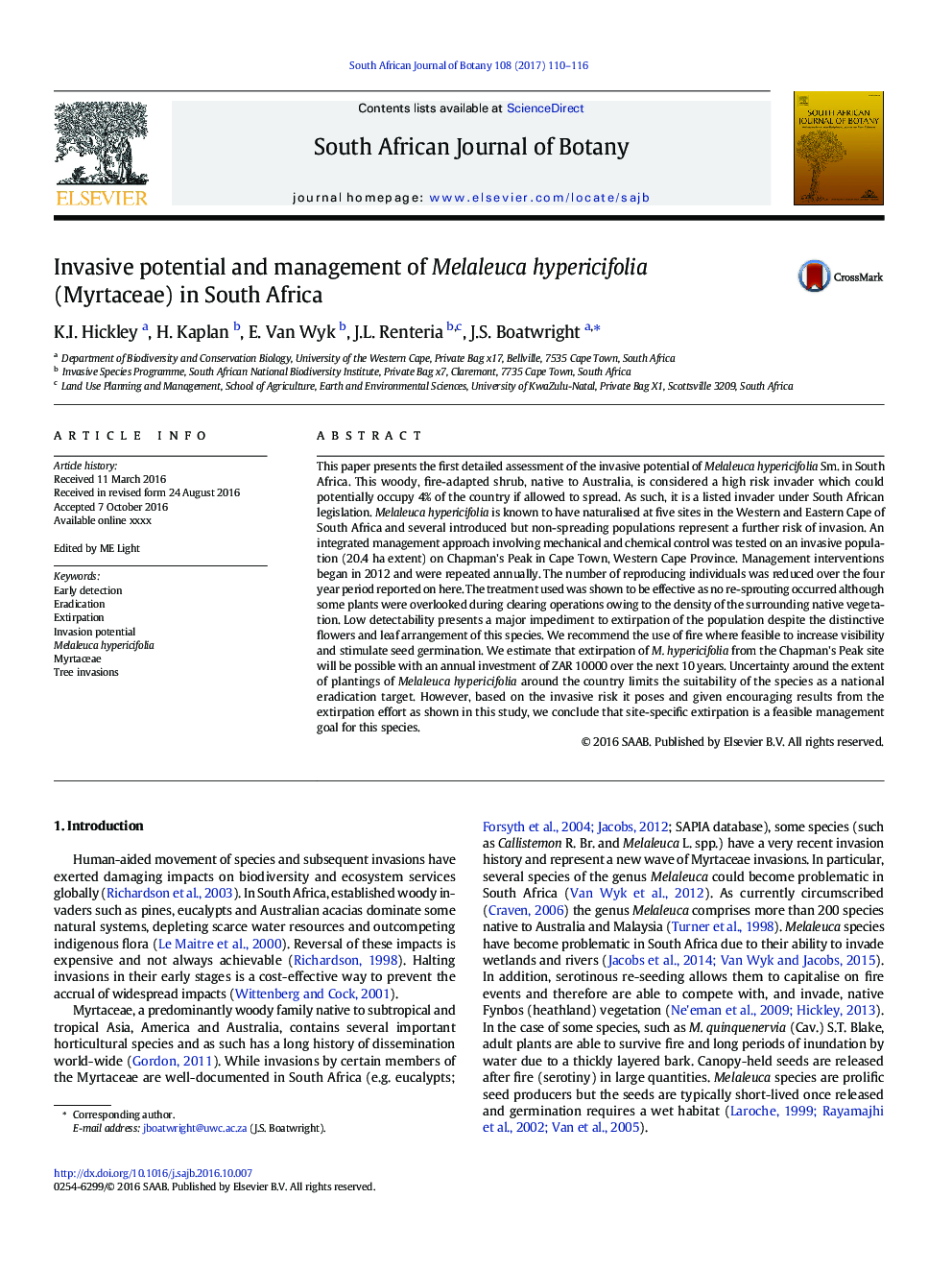 • The invasion risk of the Australian invader plant Melaleuca hypericifolia is assessed.
• It poses a high risk of invasion with the potential to occupy 4% of South Africa if allowed to spread.
• An integrated management approach involving mechanical and chemical control was tested.
• This species should remain an eradication target at known sites of invasion, based on the invasive risk it poses.
• Extirpation efforts tested in the study delivered encouraging results.

This paper presents the first detailed assessment of the invasive potential of Melaleuca hypericifolia Sm. in South Africa. This woody, fire-adapted shrub, native to Australia, is considered a high risk invader which could potentially occupy 4% of the country if allowed to spread. As such, it is a listed invader under South African legislation. Melaleuca hypericifolia is known to have naturalised at five sites in the Western and Eastern Cape of South Africa and several introduced but non-spreading populations represent a further risk of invasion. An integrated management approach involving mechanical and chemical control was tested on an invasive population (20.4 ha extent) on Chapman's Peak in Cape Town, Western Cape Province. Management interventions began in 2012 and were repeated annually. The number of reproducing individuals was reduced over the four year period reported on here. The treatment used was shown to be effective as no re-sprouting occurred although some plants were overlooked during clearing operations owing to the density of the surrounding native vegetation. Low detectability presents a major impediment to extirpation of the population despite the distinctive flowers and leaf arrangement of this species. We recommend the use of fire where feasible to increase visibility and stimulate seed germination. We estimate that extirpation of M. hypericifolia from the Chapman's Peak site will be possible with an annual investment of ZAR 10000 over the next 10 years. Uncertainty around the extent of plantings of Melaleuca hypericifolia around the country limits the suitability of the species as a national eradication target. However, based on the invasive risk it poses and given encouraging results from the extirpation effort as shown in this study, we conclude that site-specific extirpation is a feasible management goal for this species.