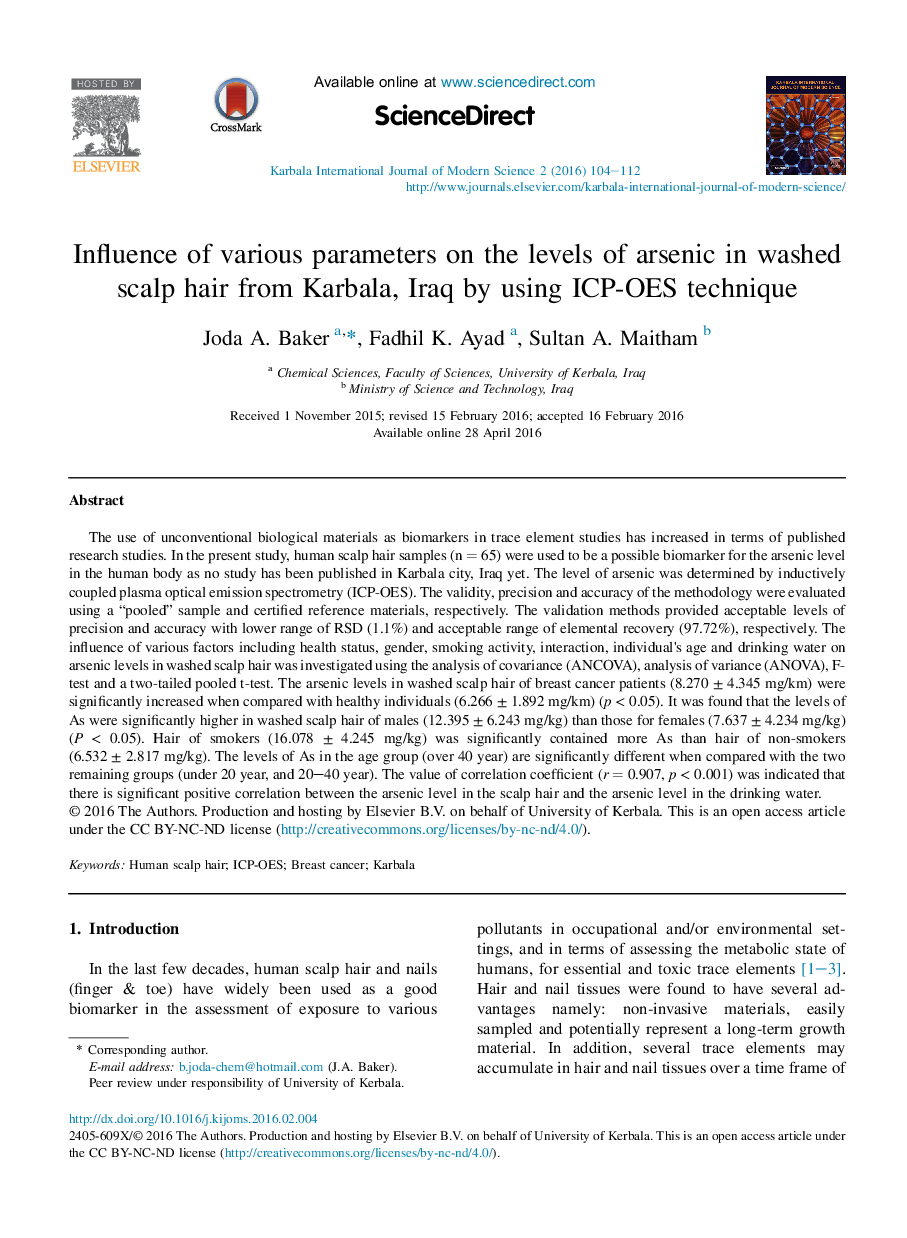 The use of unconventional biological materials as biomarkers in trace element studies has increased in terms of published research studies. In the present study, human scalp hair samples (n = 65) were used to be a possible biomarker for the arsenic level in the human body as no study has been published in Karbala city, Iraq yet. The level of arsenic was determined by inductively coupled plasma optical emission spectrometry (ICP-OES). The validity, precision and accuracy of the methodology were evaluated using a “pooled” sample and certified reference materials, respectively. The validation methods provided acceptable levels of precision and accuracy with lower range of RSD (1.1%) and acceptable range of elemental recovery (97.72%), respectively. The influence of various factors including health status, gender, smoking activity, interaction, individual's age and drinking water on arsenic levels in washed scalp hair was investigated using the analysis of covariance (ANCOVA), analysis of variance (ANOVA), F-test and a two-tailed pooled t-test. The arsenic levels in washed scalp hair of breast cancer patients (8.270 ± 4.345 mg/km) were significantly increased when compared with healthy individuals (6.266 ± 1.892 mg/km) (p < 0.05). It was found that the levels of As were significantly higher in washed scalp hair of males (12.395 ± 6.243 mg/kg) than those for females (7.637 ± 4.234 mg/kg) (P < 0.05). Hair of smokers (16.078 ± 4.245 mg/kg) was significantly contained more As than hair of non-smokers (6.532 ± 2.817 mg/kg). The levels of As in the age group (over 40 year) are significantly different when compared with the two remaining groups (under 20 year, and 20–40 year). The value of correlation coefficient (r = 0.907, p < 0.001) was indicated that there is significant positive correlation between the arsenic level in the scalp hair and the arsenic level in the drinking water.