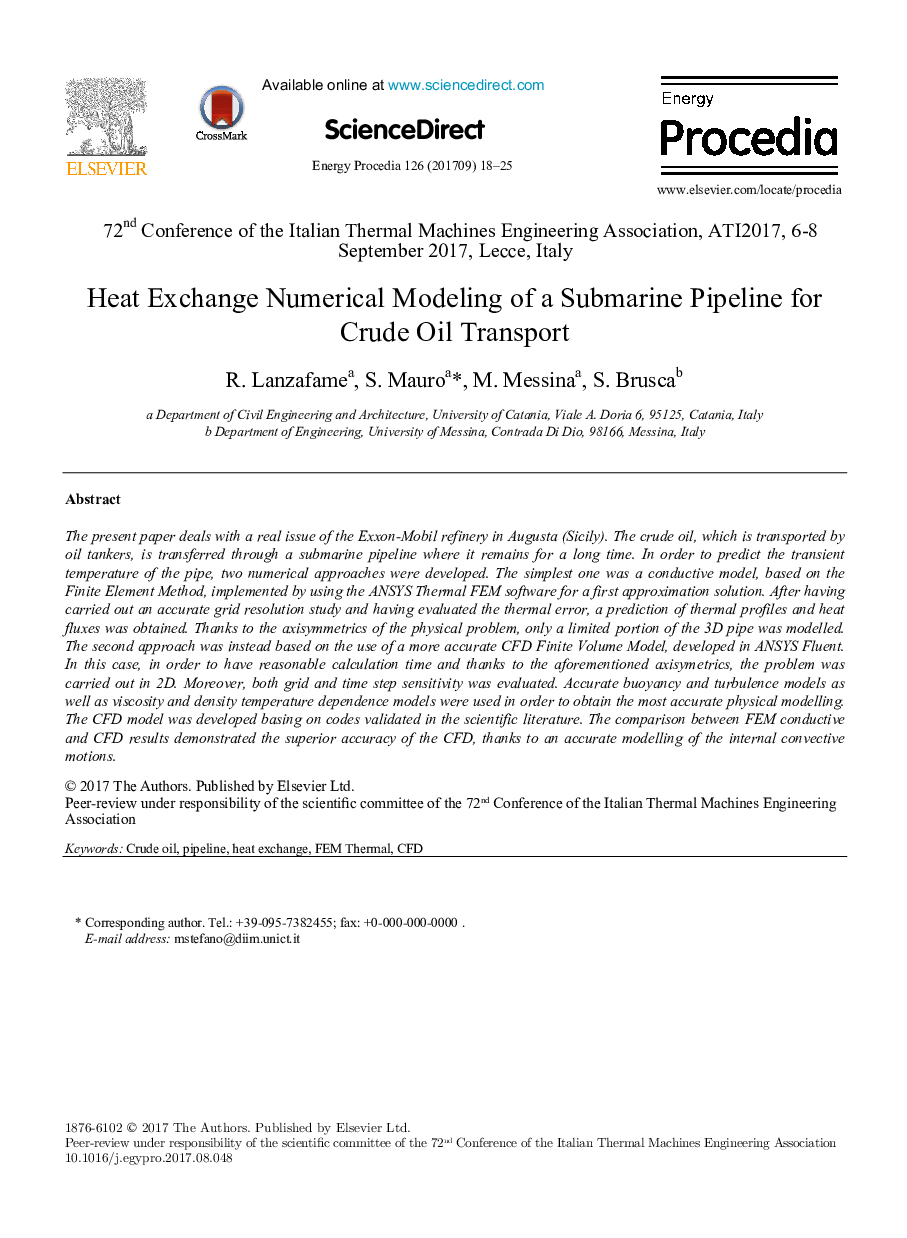 چکیده انگلیسی
The present paper deals with a real issue of the Exxon-Mobil refinery in Augusta (Sicily). The crude oil, which is transported by oil tankers, is transferred through a submarine pipeline where it remains for a long time. In order to predict the transient temperature of the pipe, two numerical approaches were developed. The simplest one was a conductive model, based on the Finite Element Method, implemented by using the ANSYS Thermal FEM software for a first approximation solution. After having carried out an accurate grid resolution study and having evaluated the thermal error, a prediction of thermal profiles and heat fluxes was obtained. Thanks to the axisymmetrics of the physical problem, only a limited portion of the 3D pipe was modelled. The second approach was instead based on the use of a more accurate CFD Finite Volume Model, developed in ANSYS Fluent. In this case, in order to have reasonable calculation time and thanks to the aforementioned axisymetrics, the problem was carried out in 2D. Moreover, both grid and time step sensitivity was evaluated. Accurate buoyancy and turbulence models as well as viscosity and density temperature dependence models were used in order to obtain the most accurate physical modelling. The CFD model was developed basing on codes validated in the scientific literature. The comparison between FEM conductive and CFD results demonstrated the superior accuracy of the CFD, thanks to an accurate modelling of the internal convective motions.
ناشر
Database: Elsevier - ScienceDirect (ساینس دایرکت)
Journal: Energy Procedia - Volume 126, September 2017, Pages 18-25
نویسندگان
R. Lanzafame, S. Mauro, M. Messina, S. Brusca,
دانلود مقاله + سفارش ترجمه
دانلود مقاله ISI انگلیسی
رایگان برای ایرانیان
سفارش ترجمه تخصصی
با تضمین قیمت و کیفیت
منتشر شده در