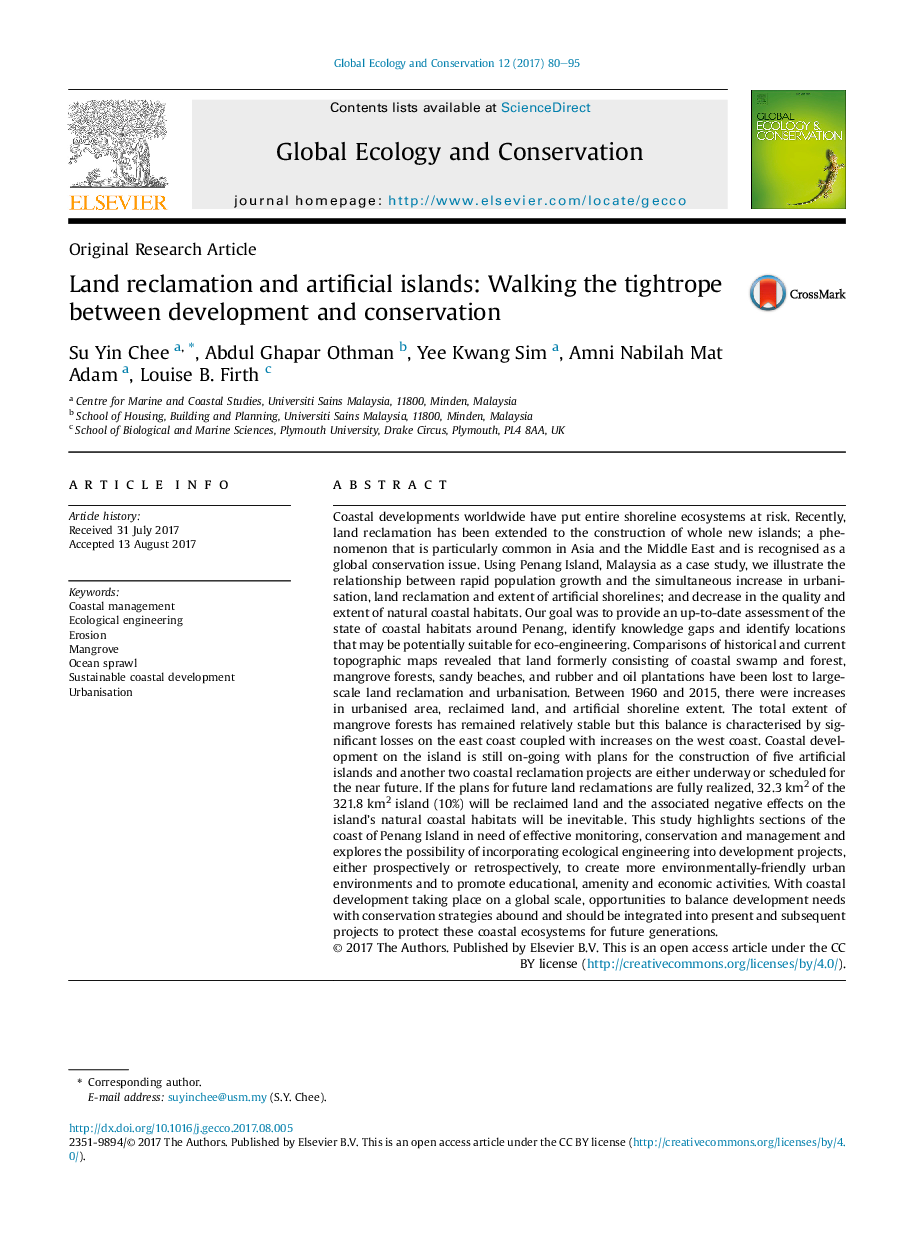 - Penang Island, Malaysia is one of the fastest growing and most densely populated places on Earth.
- We illustrate land change with natural habitats being replaced by urbanization, reclamation & artificial islands.
- If the plans for future land reclamations are fully realized 10% of Penang Island will be reclaimed land.
- Eco-engineering should be considered to promote sustainable ecosystems for the mutual benefit of nature and society.
- Large-scale developments present both challenges and opportunities for biodiversity management in a changing world.

Coastal developments worldwide have put entire shoreline ecosystems at risk. Recently, land reclamation has been extended to the construction of whole new islands; a phenomenon that is particularly common in Asia and the Middle East and is recognised as a global conservation issue. Using Penang Island, Malaysia as a case study, we illustrate the relationship between rapid population growth and the simultaneous increase in urbanisation, land reclamation and extent of artificial shorelines; and decrease in the quality and extent of natural coastal habitats. Our goal was to provide an up-to-date assessment of the state of coastal habitats around Penang, identify knowledge gaps and identify locations that may be potentially suitable for eco-engineering. Comparisons of historical and current topographic maps revealed that land formerly consisting of coastal swamp and forest, mangrove forests, sandy beaches, and rubber and oil plantations have been lost to large-scale land reclamation and urbanisation. Between 1960 and 2015, there were increases in urbanised area, reclaimed land, and artificial shoreline extent. The total extent of mangrove forests has remained relatively stable but this balance is characterised by significant losses on the east coast coupled with increases on the west coast. Coastal development on the island is still on-going with plans for the construction of five artificial islands and another two coastal reclamation projects are either underway or scheduled for the near future. If the plans for future land reclamations are fully realized, 32.3Â km2 of the 321.8Â km2 island (10%) will be reclaimed land and the associated negative effects on the island's natural coastal habitats will be inevitable. This study highlights sections of the coast of Penang Island in need of effective monitoring, conservation and management and explores the possibility of incorporating ecological engineering into development projects, either prospectively or retrospectively, to create more environmentally-friendly urban environments and to promote educational, amenity and economic activities. With coastal development taking place on a global scale, opportunities to balance development needs with conservation strategies abound and should be integrated into present and subsequent projects to protect these coastal ecosystems for future generations.