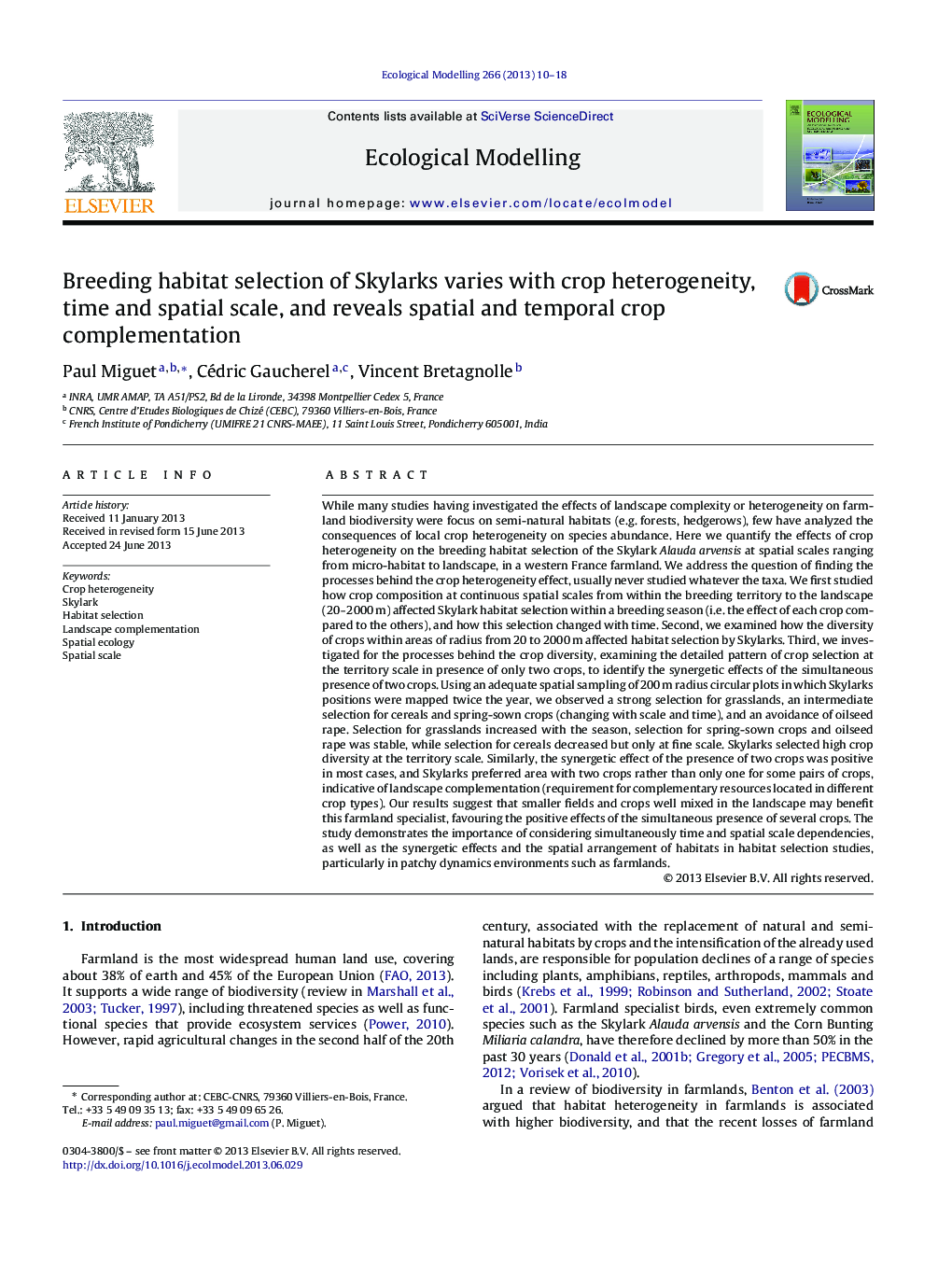 چکیده انگلیسی
While many studies having investigated the effects of landscape complexity or heterogeneity on farmland biodiversity were focus on semi-natural habitats (e.g. forests, hedgerows), few have analyzed the consequences of local crop heterogeneity on species abundance. Here we quantify the effects of crop heterogeneity on the breeding habitat selection of the Skylark Alauda arvensis at spatial scales ranging from micro-habitat to landscape, in a western France farmland. We address the question of finding the processes behind the crop heterogeneity effect, usually never studied whatever the taxa. We first studied how crop composition at continuous spatial scales from within the breeding territory to the landscape (20-2000Â m) affected Skylark habitat selection within a breeding season (i.e. the effect of each crop compared to the others), and how this selection changed with time. Second, we examined how the diversity of crops within areas of radius from 20 to 2000Â m affected habitat selection by Skylarks. Third, we investigated for the processes behind the crop diversity, examining the detailed pattern of crop selection at the territory scale in presence of only two crops, to identify the synergetic effects of the simultaneous presence of two crops. Using an adequate spatial sampling of 200Â m radius circular plots in which Skylarks positions were mapped twice the year, we observed a strong selection for grasslands, an intermediate selection for cereals and spring-sown crops (changing with scale and time), and an avoidance of oilseed rape. Selection for grasslands increased with the season, selection for spring-sown crops and oilseed rape was stable, while selection for cereals decreased but only at fine scale. Skylarks selected high crop diversity at the territory scale. Similarly, the synergetic effect of the presence of two crops was positive in most cases, and Skylarks preferred area with two crops rather than only one for some pairs of crops, indicative of landscape complementation (requirement for complementary resources located in different crop types). Our results suggest that smaller fields and crops well mixed in the landscape may benefit this farmland specialist, favouring the positive effects of the simultaneous presence of several crops. The study demonstrates the importance of considering simultaneously time and spatial scale dependencies, as well as the synergetic effects and the spatial arrangement of habitats in habitat selection studies, particularly in patchy dynamics environments such as farmlands.
ناشر
Database: Elsevier - ScienceDirect (ساینس دایرکت)
Journal: Ecological Modelling - Volume 266, 24 September 2013, Pages 10-18
نویسندگان
Paul Miguet, Cédric Gaucherel, Vincent Bretagnolle,
دانلود مقاله + سفارش ترجمه
دانلود مقاله ISI انگلیسی
رایگان برای ایرانیان
سفارش ترجمه تخصصی
با تضمین قیمت و کیفیت
منتشر شده در