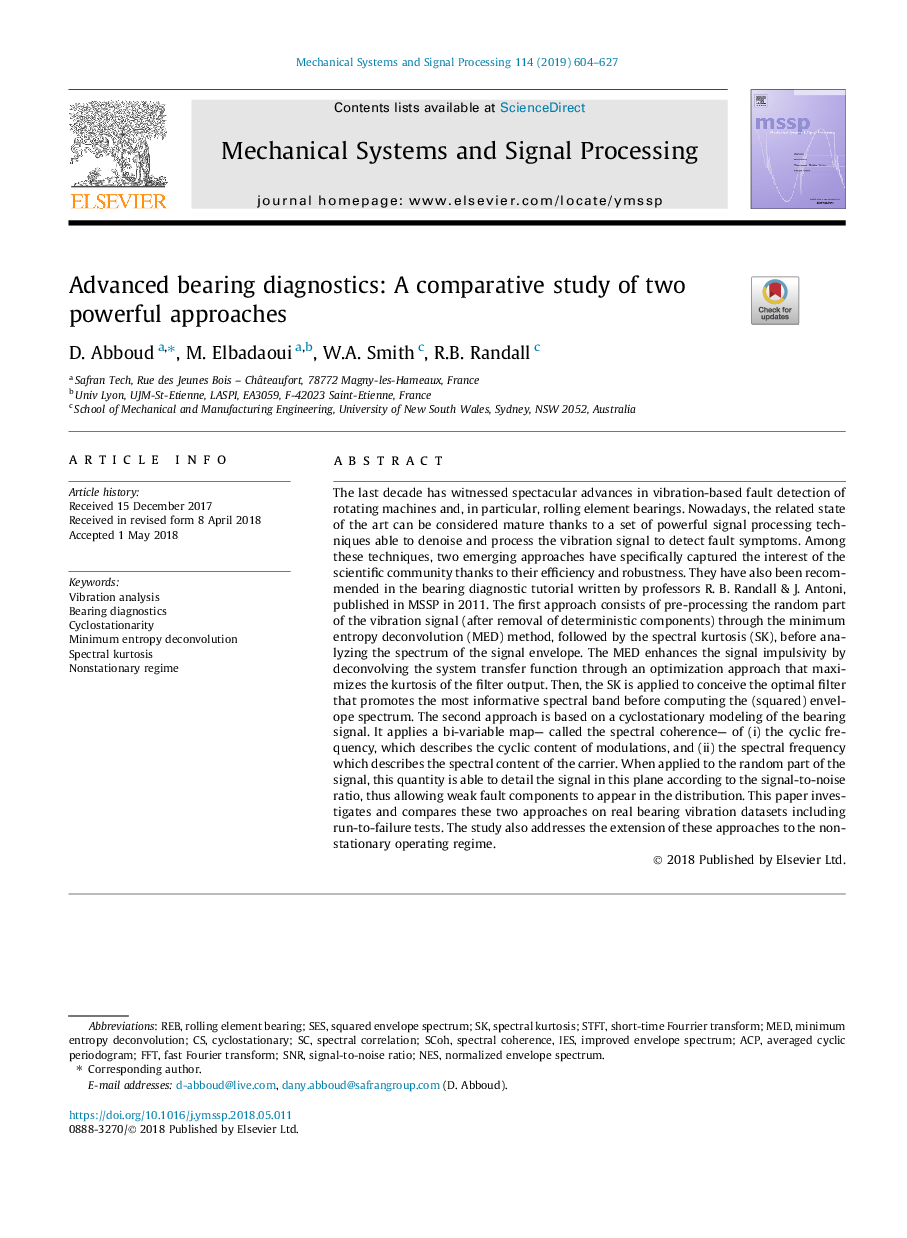 چکیده انگلیسی
The last decade has witnessed spectacular advances in vibration-based fault detection of rotating machines and, in particular, rolling element bearings. Nowadays, the related state of the art can be considered mature thanks to a set of powerful signal processing techniques able to denoise and process the vibration signal to detect fault symptoms. Among these techniques, two emerging approaches have specifically captured the interest of the scientific community thanks to their efficiency and robustness. They have also been recommended in the bearing diagnostic tutorial written by professors R. B. Randall & J. Antoni, published in MSSP in 2011. The first approach consists of pre-processing the random part of the vibration signal (after removal of deterministic components) through the minimum entropy deconvolution (MED) method, followed by the spectral kurtosis (SK), before analyzing the spectrum of the signal envelope. The MED enhances the signal impulsivity by deconvolving the system transfer function through an optimization approach that maximizes the kurtosis of the filter output. Then, the SK is applied to conceive the optimal filter that promotes the most informative spectral band before computing the (squared) envelope spectrum. The second approach is based on a cyclostationary modeling of the bearing signal. It applies a bi-variable map- called the spectral coherence- of (i) the cyclic frequency, which describes the cyclic content of modulations, and (ii) the spectral frequency which describes the spectral content of the carrier. When applied to the random part of the signal, this quantity is able to detail the signal in this plane according to the signal-to-noise ratio, thus allowing weak fault components to appear in the distribution. This paper investigates and compares these two approaches on real bearing vibration datasets including run-to-failure tests. The study also addresses the extension of these approaches to the nonstationary operating regime.
ناشر
Database: Elsevier - ScienceDirect (ساینس دایرکت)
Journal: Mechanical Systems and Signal Processing - Volume 114, 1 January 2019, Pages 604-627
نویسندگان
D. Abboud, M. Elbadaoui, W.A. Smith, R.B. Randall,
دانلود مقاله + سفارش ترجمه
دانلود مقاله ISI انگلیسی
رایگان برای ایرانیان
سفارش ترجمه تخصصی
با تضمین قیمت و کیفیت
منتشر شده در