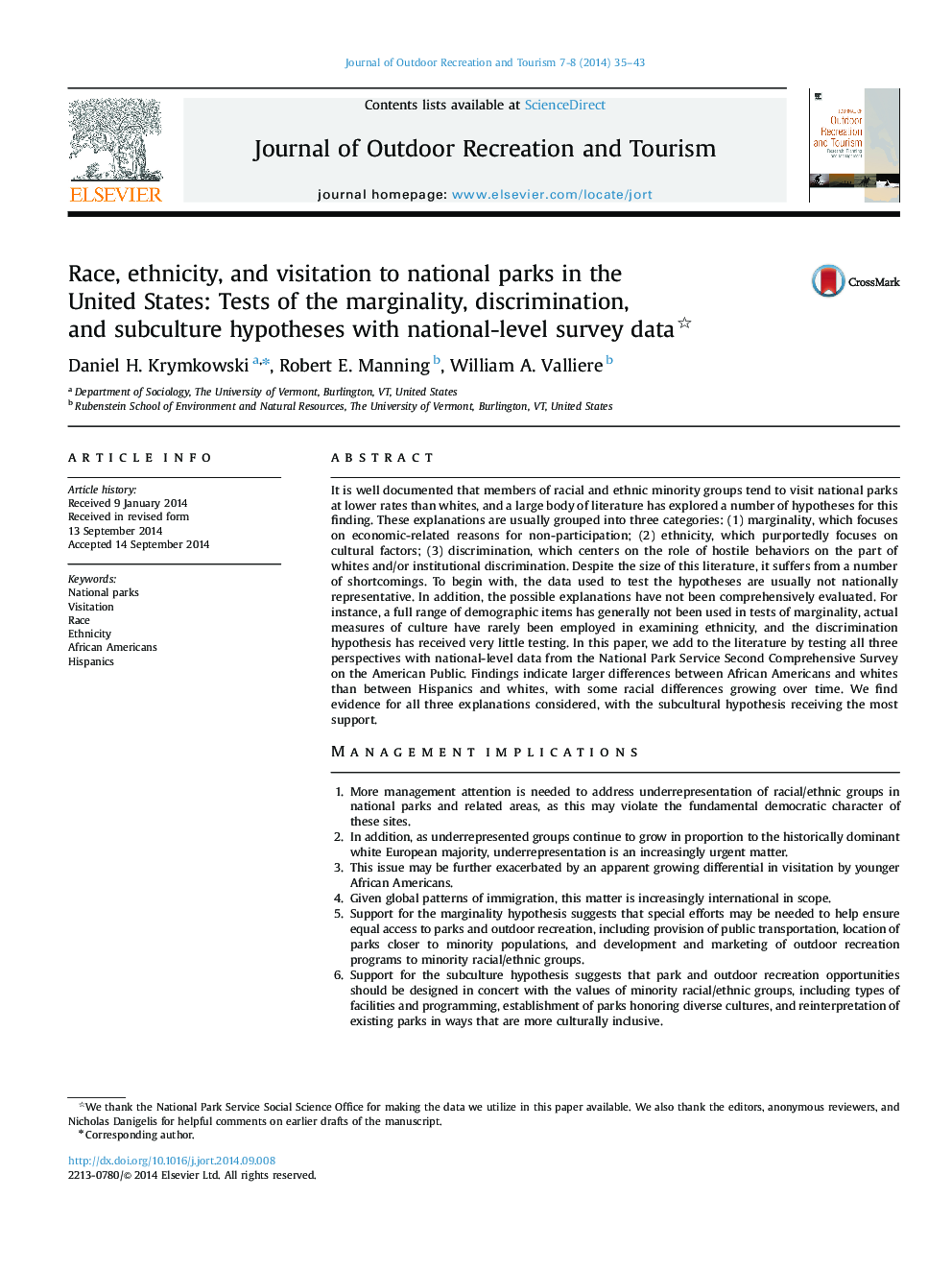 It is well documented that members of racial and ethnic minority groups tend to visit national parks at lower rates than whites, and a large body of literature has explored a number of hypotheses for this finding. These explanations are usually grouped into three categories: (1) marginality, which focuses on economic-related reasons for non-participation; (2) ethnicity, which purportedly focuses on cultural factors; (3) discrimination, which centers on the role of hostile behaviors on the part of whites and/or institutional discrimination. Despite the size of this literature, it suffers from a number of shortcomings. To begin with, the data used to test the hypotheses are usually not nationally representative. In addition, the possible explanations have not been comprehensively evaluated. For instance, a full range of demographic items has generally not been used in tests of marginality, actual measures of culture have rarely been employed in examining ethnicity, and the discrimination hypothesis has received very little testing. In this paper, we add to the literature by testing all three perspectives with national-level data from the National Park Service Second Comprehensive Survey on the American Public. Findings indicate larger differences between African Americans and whites than between Hispanics and whites, with some racial differences growing over time. We find evidence for all three explanations considered, with the subcultural hypothesis receiving the most support.Management implications1.More management attention is needed to address underrepresentation of racial/ethnic groups in national parks and related areas, as this may violate the fundamental democratic character of these sites.2.In addition, as underrepresented groups continue to grow in proportion to the historically dominant white European majority, underrepresentation is an increasingly urgent matter.3.This issue may be further exacerbated by an apparent growing differential in visitation by younger African Americans.4.Given global patterns of immigration, this matter is increasingly international in scope.5.Support for the marginality hypothesis suggests that special efforts may be needed to help ensure equal access to parks and outdoor recreation, including provision of public transportation, location of parks closer to minority populations, and development and marketing of outdoor recreation programs to minority racial/ethnic groups.6.Support for the subculture hypothesis suggests that park and outdoor recreation opportunities should be designed in concert with the values of minority racial/ethnic groups, including types of facilities and programming, establishment of parks honoring diverse cultures, and reinterpretation of existing parks in ways that are more culturally inclusive.7.Support for the discrimination hypothesis suggests that park and outdoor recreation managers re-examine their agencies and programs for evidence of interpersonal and institutional discrimination, including hiring practices and pricing policies.