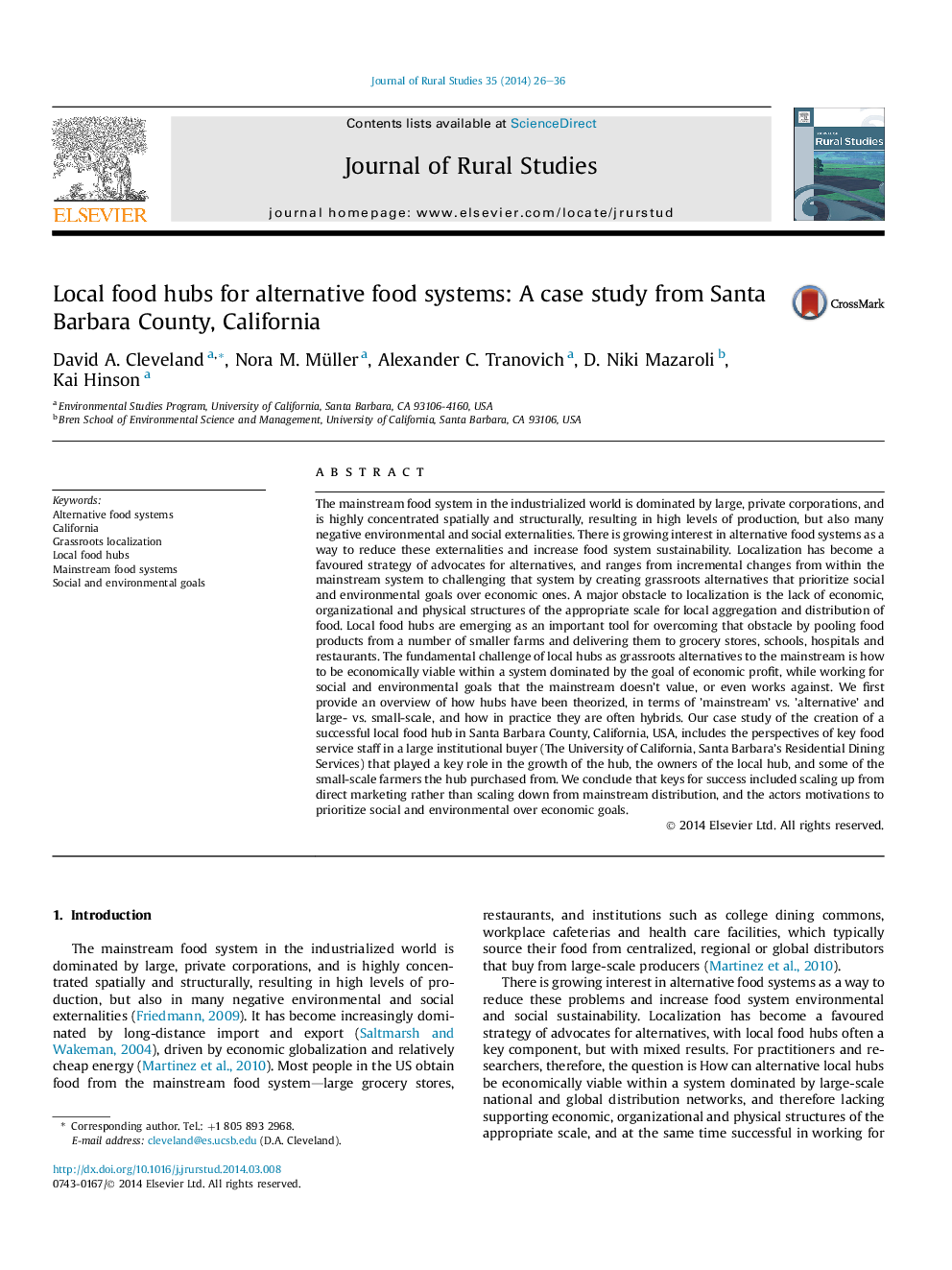 • Local food hubs can address problems of the profit-driven, mainstream, global food system.
• Local hubs are often hybrids of alternative small-scale and mainstream large-scale distribution.
• A case study of a local food hub in California elucidates some key criteria for success.
• Scaling up from direct marketing, vs. down from mainstream distribution was a key to success.
• Motivation of actors to prioritize social and environmental over economic goals was another key to success.

The mainstream food system in the industrialized world is dominated by large, private corporations, and is highly concentrated spatially and structurally, resulting in high levels of production, but also many negative environmental and social externalities. There is growing interest in alternative food systems as a way to reduce these externalities and increase food system sustainability. Localization has become a favoured strategy of advocates for alternatives, and ranges from incremental changes from within the mainstream system to challenging that system by creating grassroots alternatives that prioritize social and environmental goals over economic ones. A major obstacle to localization is the lack of economic, organizational and physical structures of the appropriate scale for local aggregation and distribution of food. Local food hubs are emerging as an important tool for overcoming that obstacle by pooling food products from a number of smaller farms and delivering them to grocery stores, schools, hospitals and restaurants. The fundamental challenge of local hubs as grassroots alternatives to the mainstream is how to be economically viable within a system dominated by the goal of economic profit, while working for social and environmental goals that the mainstream doesn't value, or even works against. We first provide an overview of how hubs have been theorized, in terms of 'mainstream' vs. 'alternative' and large- vs. small-scale, and how in practice they are often hybrids. Our case study of the creation of a successful local food hub in Santa Barbara County, California, USA, includes the perspectives of key food service staff in a large institutional buyer (The University of California, Santa Barbara's Residential Dining Services) that played a key role in the growth of the hub, the owners of the local hub, and some of the small-scale farmers the hub purchased from. We conclude that keys for success included scaling up from direct marketing rather than scaling down from mainstream distribution, and the actors motivations to prioritize social and environmental over economic goals.