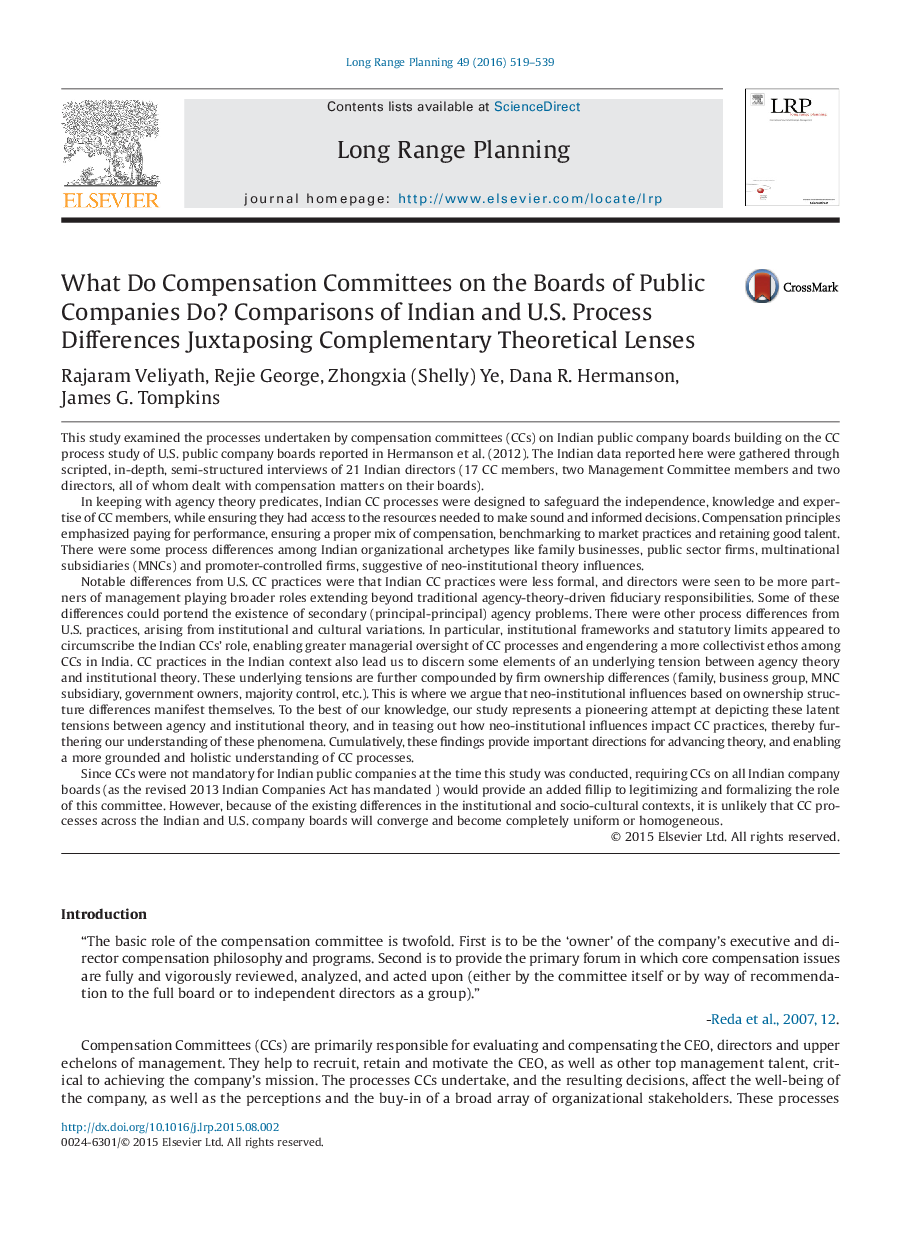 This study examined the processes undertaken by compensation committees (CCs) on Indian public company boards building on the CC process study of U.S. public company boards reported in Hermanson et al. (2012). The Indian data reported here were gathered through scripted, in-depth, semi-structured interviews of 21 Indian directors (17 CC members, two Management Committee members and two directors, all of whom dealt with compensation matters on their boards).In keeping with agency theory predicates, Indian CC processes were designed to safeguard the independence, knowledge and expertise of CC members, while ensuring they had access to the resources needed to make sound and informed decisions. Compensation principles emphasized paying for performance, ensuring a proper mix of compensation, benchmarking to market practices and retaining good talent. There were some process differences among Indian organizational archetypes like family businesses, public sector firms, multinational subsidiaries (MNCs) and promoter-controlled firms, suggestive of neo-institutional theory influences.Notable differences from U.S. CC practices were that Indian CC practices were less formal, and directors were seen to be more partners of management playing broader roles extending beyond traditional agency-theory-driven fiduciary responsibilities. Some of these differences could portend the existence of secondary (principal-principal) agency problems. There were other process differences from U.S. practices, arising from institutional and cultural variations. In particular, institutional frameworks and statutory limits appeared to circumscribe the Indian CCs' role, enabling greater managerial oversight of CC processes and engendering a more collectivist ethos among CCs in India. CC practices in the Indian context also lead us to discern some elements of an underlying tension between agency theory and institutional theory. These underlying tensions are further compounded by firm ownership differences (family, business group, MNC subsidiary, government owners, majority control, etc.). This is where we argue that neo-institutional influences based on ownership structure differences manifest themselves. To the best of our knowledge, our study represents a pioneering attempt at depicting these latent tensions between agency and institutional theory, and in teasing out how neo-institutional influences impact CC practices, thereby furthering our understanding of these phenomena. Cumulatively, these findings provide important directions for advancing theory, and enabling a more grounded and holistic understanding of CC processes.Since CCs were not mandatory for Indian public companies at the time this study was conducted, requiring CCs on all Indian company boards (as the revised 2013 Indian Companies Act has mandated ) would provide an added fillip to legitimizing and formalizing the role of this committee. However, because of the existing differences in the institutional and socio-cultural contexts, it is unlikely that CC processes across the Indian and U.S. company boards will converge and become completely uniform or homogeneous.