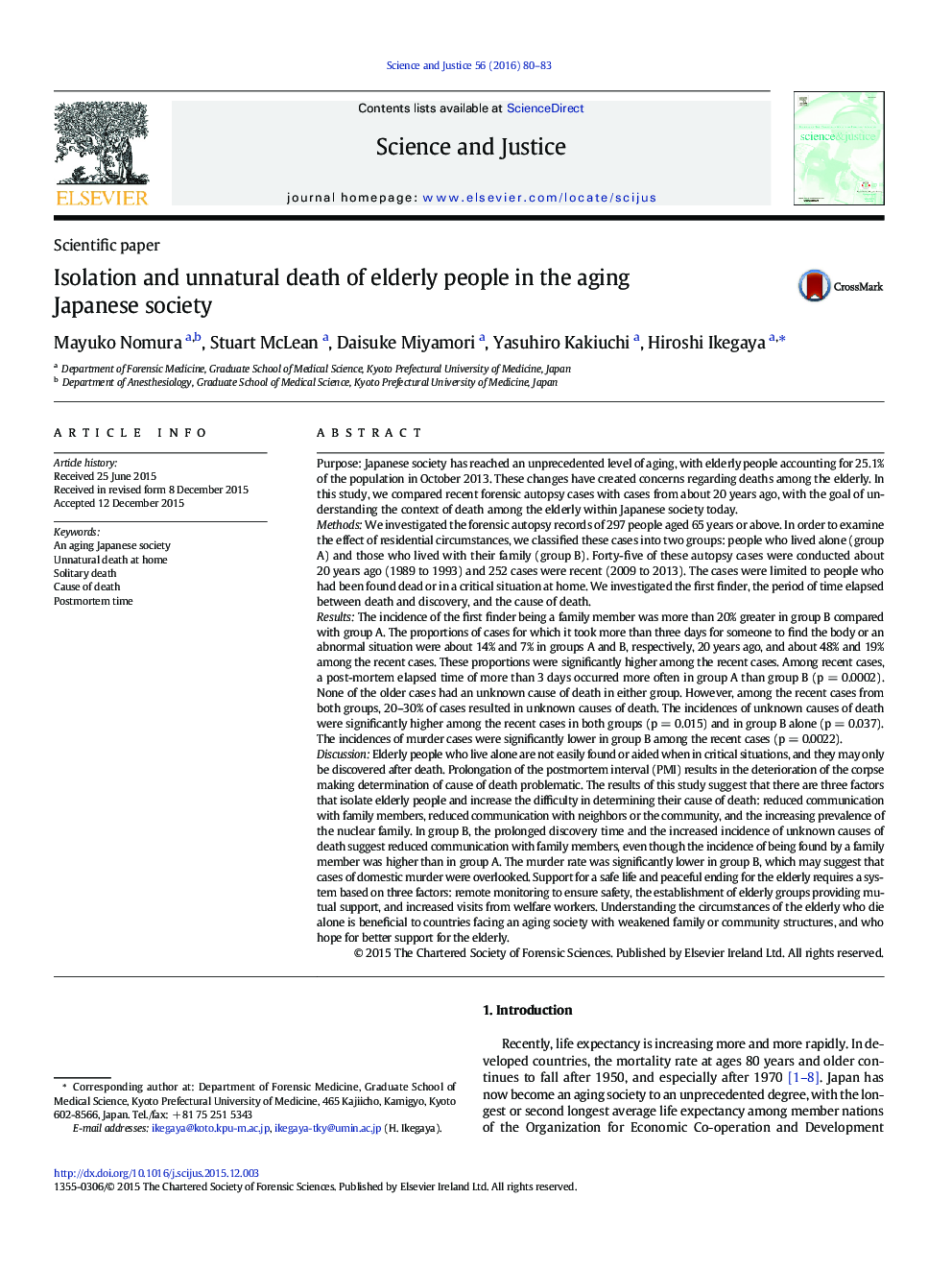 • We compared cases of unnatural death among the elderly recorded 20 years ago and recently.
• The possibility of the first finder being a family member has increased in recent years.
• The postmortem time of cadavers and abnormal situation(s) has increased relative to 20 years ago.
• Death from unknown causes are greater now than 20 years ago.
• Decreased communication, and the increased nuclear family might explain these results.

Purpose: Japanese society has reached an unprecedented level of aging, with elderly people accounting for 25.1% of the population in October 2013. These changes have created concerns regarding deaths among the elderly. In this study, we compared recent forensic autopsy cases with cases from about 20 years ago, with the goal of understanding the context of death among the elderly within Japanese society today.MethodsWe investigated the forensic autopsy records of 297 people aged 65 years or above. In order to examine the effect of residential circumstances, we classified these cases into two groups: people who lived alone (group A) and those who lived with their family (group B). Forty-five of these autopsy cases were conducted about 20 years ago (1989 to 1993) and 252 cases were recent (2009 to 2013). The cases were limited to people who had been found dead or in a critical situation at home. We investigated the first finder, the period of time elapsed between death and discovery, and the cause of death.ResultsThe incidence of the first finder being a family member was more than 20% greater in group B compared with group A. The proportions of cases for which it took more than three days for someone to find the body or an abnormal situation were about 14% and 7% in groups A and B, respectively, 20 years ago, and about 48% and 19% among the recent cases. These proportions were significantly higher among the recent cases. Among recent cases, a post-mortem elapsed time of more than 3 days occurred more often in group A than group B (p = 0.0002). None of the older cases had an unknown cause of death in either group. However, among the recent cases from both groups, 20–30% of cases resulted in unknown causes of death. The incidences of unknown causes of death were significantly higher among the recent cases in both groups (p = 0.015) and in group B alone (p = 0.037). The incidences of murder cases were significantly lower in group B among the recent cases (p = 0.0022).DiscussionElderly people who live alone are not easily found or aided when in critical situations, and they may only be discovered after death. Prolongation of the postmortem interval (PMI) results in the deterioration of the corpse making determination of cause of death problematic. The results of this study suggest that there are three factors that isolate elderly people and increase the difficulty in determining their cause of death: reduced communication with family members, reduced communication with neighbors or the community, and the increasing prevalence of the nuclear family. In group B, the prolonged discovery time and the increased incidence of unknown causes of death suggest reduced communication with family members, even though the incidence of being found by a family member was higher than in group A. The murder rate was significantly lower in group B, which may suggest that cases of domestic murder were overlooked. Support for a safe life and peaceful ending for the elderly requires a system based on three factors: remote monitoring to ensure safety, the establishment of elderly groups providing mutual support, and increased visits from welfare workers. Understanding the circumstances of the elderly who die alone is beneficial to countries facing an aging society with weakened family or community structures, and who hope for better support for the elderly.