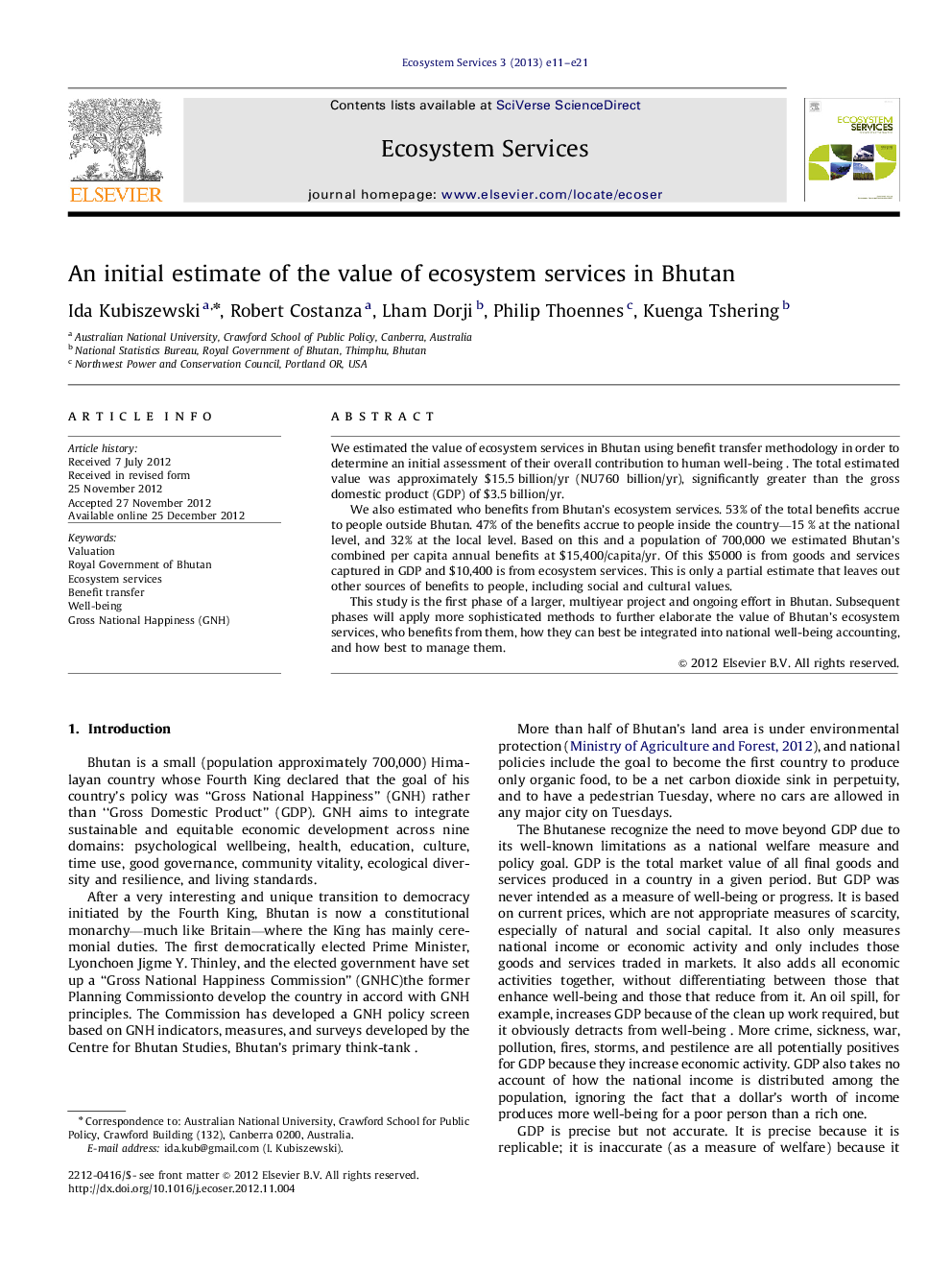 We estimated the value of ecosystem services in Bhutan using benefit transfer methodology in order to determine an initial assessment of their overall contribution to human well-being . The total estimated value was approximately $15.5 billion/yr (NU760 billion/yr), significantly greater than the gross domestic product (GDP) of $3.5 billion/yr.We also estimated who benefits from Bhutan's ecosystem services. 53% of the total benefits accrue to people outside Bhutan. 47% of the benefits accrue to people inside the country—15 % at the national level, and 32% at the local level. Based on this and a population of 700,000 we estimated Bhutan’s combined per capita annual benefits at $15,400/capita/yr. Of this $5000 is from goods and services captured in GDP and $10,400 is from ecosystem services. This is only a partial estimate that leaves out other sources of benefits to people, including social and cultural values.This study is the first phase of a larger, multiyear project and ongoing effort in Bhutan. Subsequent phases will apply more sophisticated methods to further elaborate the value of Bhutan's ecosystem services, who benefits from them, how they can best be integrated into national well-being accounting, and how best to manage them.

► The total estimated value of ecosystem services in Bhutan is approximately $15.5 billion/year (NU 760 billion/yr). Most of this value is derived from forested land, covering over 74.5% of the land surface and contributes 93.8% of the total estimated value. Cropland is second in value with 3.7% of total value, from only 8.0% of land area.
► Fifty three percent (53%) of the total benefits accrue to people outside Bhutan, largely due to climate regulation ($3.5 billion/yr) and tourism/recreation ($2.5 billion/yr). Forty seven percent (47%) of the benefits accrue to people inside the country—15 % at the national level, and 32% at the local level.
► Based on the benefits accrued and a population of 700,000, we estimated the benefits from ecosystem services to Bhutan residents at $10,400/capita/yr (NU 511,000/capita/yr).