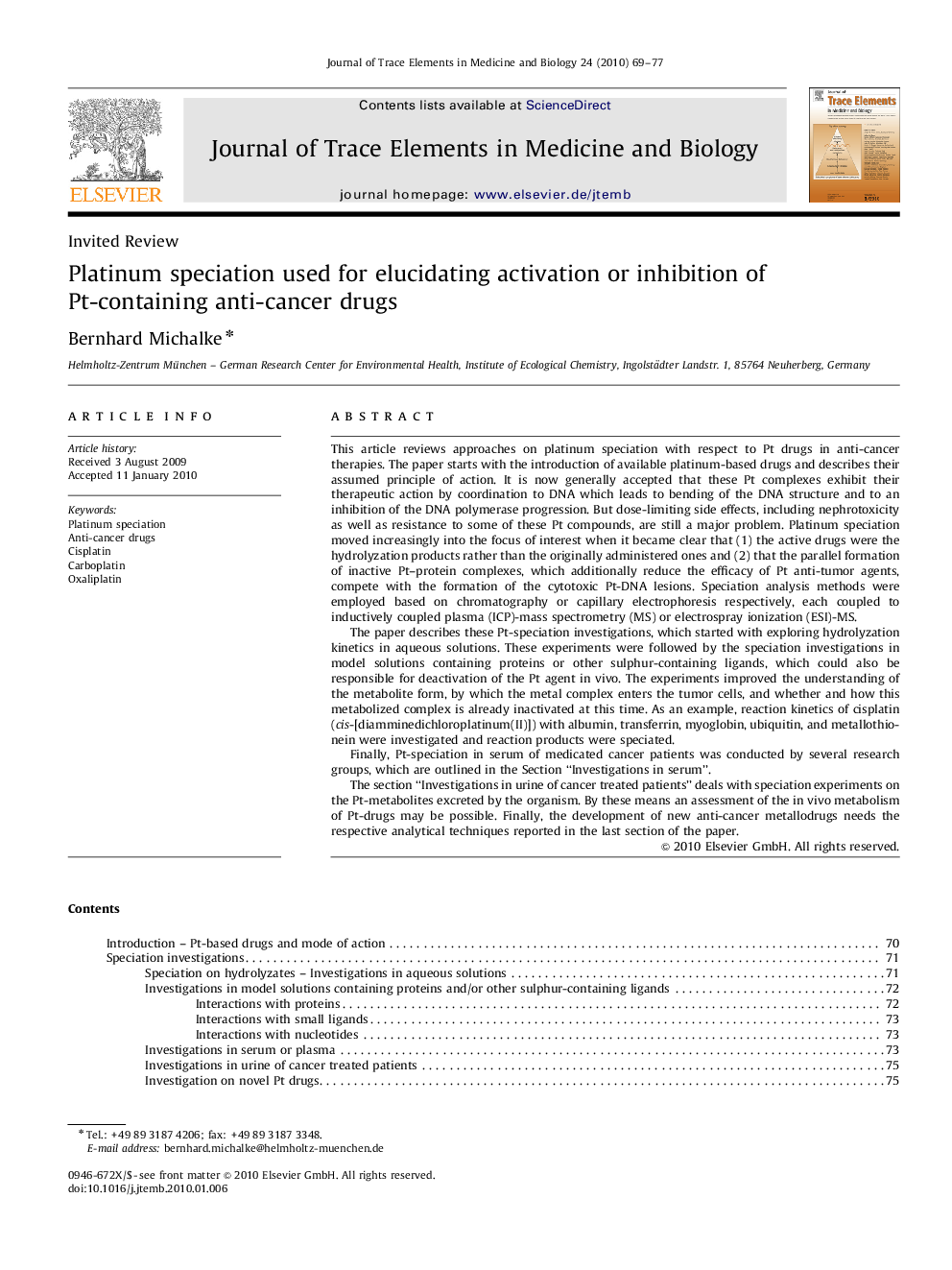 This article reviews approaches on platinum speciation with respect to Pt drugs in anti-cancer therapies. The paper starts with the introduction of available platinum-based drugs and describes their assumed principle of action. It is now generally accepted that these Pt complexes exhibit their therapeutic action by coordination to DNA which leads to bending of the DNA structure and to an inhibition of the DNA polymerase progression. But dose-limiting side effects, including nephrotoxicity as well as resistance to some of these Pt compounds, are still a major problem. Platinum speciation moved increasingly into the focus of interest when it became clear that (1) the active drugs were the hydrolyzation products rather than the originally administered ones and (2) that the parallel formation of inactive Pt–protein complexes, which additionally reduce the efficacy of Pt anti-tumor agents, compete with the formation of the cytotoxic Pt-DNA lesions. Speciation analysis methods were employed based on chromatography or capillary electrophoresis respectively, each coupled to inductively coupled plasma (ICP)-mass spectrometry (MS) or electrospray ionization (ESI)-MS.The paper describes these Pt-speciation investigations, which started with exploring hydrolyzation kinetics in aqueous solutions. These experiments were followed by the speciation investigations in model solutions containing proteins or other sulphur-containing ligands, which could also be responsible for deactivation of the Pt agent in vivo. The experiments improved the understanding of the metabolite form, by which the metal complex enters the tumor cells, and whether and how this metabolized complex is already inactivated at this time. As an example, reaction kinetics of cisplatin (cis-[diamminedichloroplatinum(II)]) with albumin, transferrin, myoglobin, ubiquitin, and metallothionein were investigated and reaction products were speciated.Finally, Pt-speciation in serum of medicated cancer patients was conducted by several research groups, which are outlined in the Section “Investigations in serum”.The section “Investigations in urine of cancer treated patients” deals with speciation experiments on the Pt-metabolites excreted by the organism. By these means an assessment of the in vivo metabolism of Pt-drugs may be possible. Finally, the development of new anti-cancer metallodrugs needs the respective analytical techniques reported in the last section of the paper.