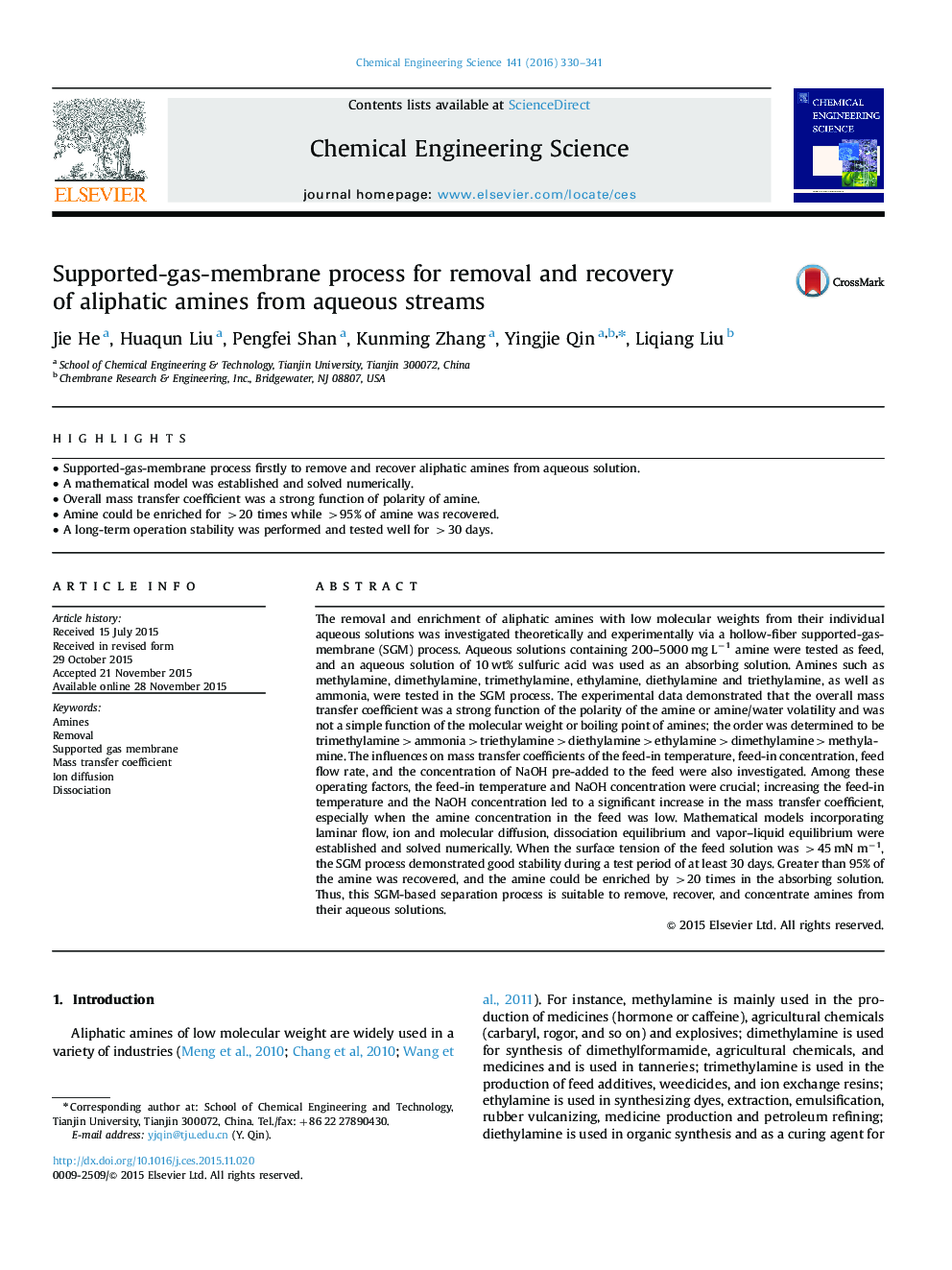 • Supported-gas-membrane process firstly to remove and recover aliphatic amines from aqueous solution.
• A mathematical model was established and solved numerically.
• Overall mass transfer coefficient was a strong function of polarity of amine.
• Amine could be enriched for >20 times while >95% of amine was recovered.
• A long-term operation stability was performed and tested well for >30 days.

The removal and enrichment of aliphatic amines with low molecular weights from their individual aqueous solutions was investigated theoretically and experimentally via a hollow-fiber supported-gas-membrane (SGM) process. Aqueous solutions containing 200–5000 mg L−1 amine were tested as feed, and an aqueous solution of 10 wt% sulfuric acid was used as an absorbing solution. Amines such as methylamine, dimethylamine, trimethylamine, ethylamine, diethylamine and triethylamine, as well as ammonia, were tested in the SGM process. The experimental data demonstrated that the overall mass transfer coefficient was a strong function of the polarity of the amine or amine/water volatility and was not a simple function of the molecular weight or boiling point of amines; the order was determined to be trimethylamine>ammonia>triethylamine>diethylamine>ethylamine>dimethylamine>methylamine. The influences on mass transfer coefficients of the feed-in temperature, feed-in concentration, feed flow rate, and the concentration of NaOH pre-added to the feed were also investigated. Among these operating factors, the feed-in temperature and NaOH concentration were crucial; increasing the feed-in temperature and the NaOH concentration led to a significant increase in the mass transfer coefficient, especially when the amine concentration in the feed was low. Mathematical models incorporating laminar flow, ion and molecular diffusion, dissociation equilibrium and vapor–liquid equilibrium were established and solved numerically. When the surface tension of the feed solution was >45 mN m−1, the SGM process demonstrated good stability during a test period of at least 30 days. Greater than 95% of the amine was recovered, and the amine could be enriched by >20 times in the absorbing solution. Thus, this SGM-based separation process is suitable to remove, recover, and concentrate amines from their aqueous solutions.