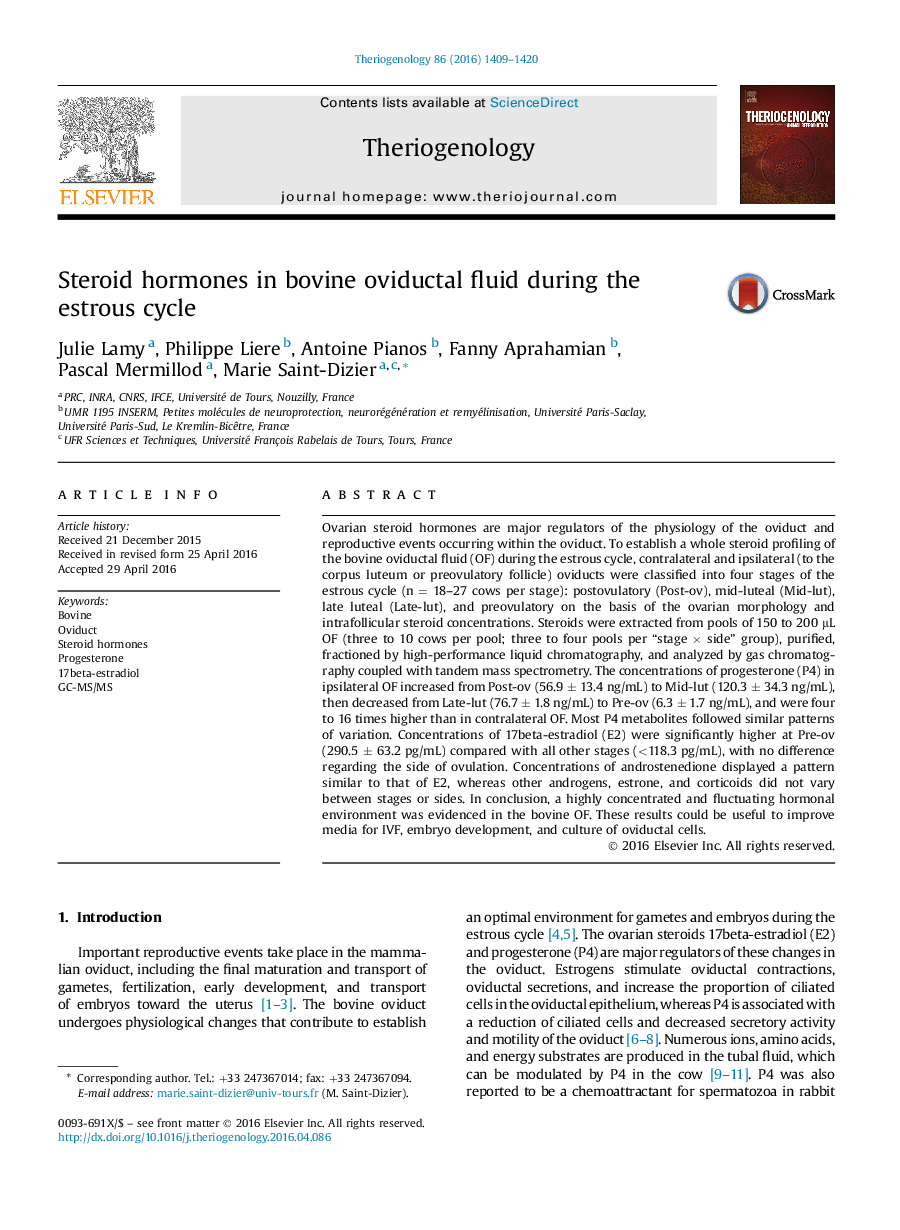 Ovarian steroid hormones are major regulators of the physiology of the oviduct and reproductive events occurring within the oviduct. To establish a whole steroid profiling of the bovine oviductal fluid (OF) during the estrous cycle, contralateral and ipsilateral (to the corpus luteum or preovulatory follicle) oviducts were classified into four stages of the estrous cycle (n = 18–27 cows per stage): postovulatory (Post-ov), mid-luteal (Mid-lut), late luteal (Late-lut), and preovulatory on the basis of the ovarian morphology and intrafollicular steroid concentrations. Steroids were extracted from pools of 150 to 200 μL OF (three to 10 cows per pool; three to four pools per “stage × side” group), purified, fractioned by high-performance liquid chromatography, and analyzed by gas chromatography coupled with tandem mass spectrometry. The concentrations of progesterone (P4) in ipsilateral OF increased from Post-ov (56.9 ± 13.4 ng/mL) to Mid-lut (120.3 ± 34.3 ng/mL), then decreased from Late-lut (76.7 ± 1.8 ng/mL) to Pre-ov (6.3 ± 1.7 ng/mL), and were four to 16 times higher than in contralateral OF. Most P4 metabolites followed similar patterns of variation. Concentrations of 17beta-estradiol (E2) were significantly higher at Pre-ov (290.5 ± 63.2 pg/mL) compared with all other stages (<118.3 pg/mL), with no difference regarding the side of ovulation. Concentrations of androstenedione displayed a pattern similar to that of E2, whereas other androgens, estrone, and corticoids did not vary between stages or sides. In conclusion, a highly concentrated and fluctuating hormonal environment was evidenced in the bovine OF. These results could be useful to improve media for IVF, embryo development, and culture of oviductal cells.