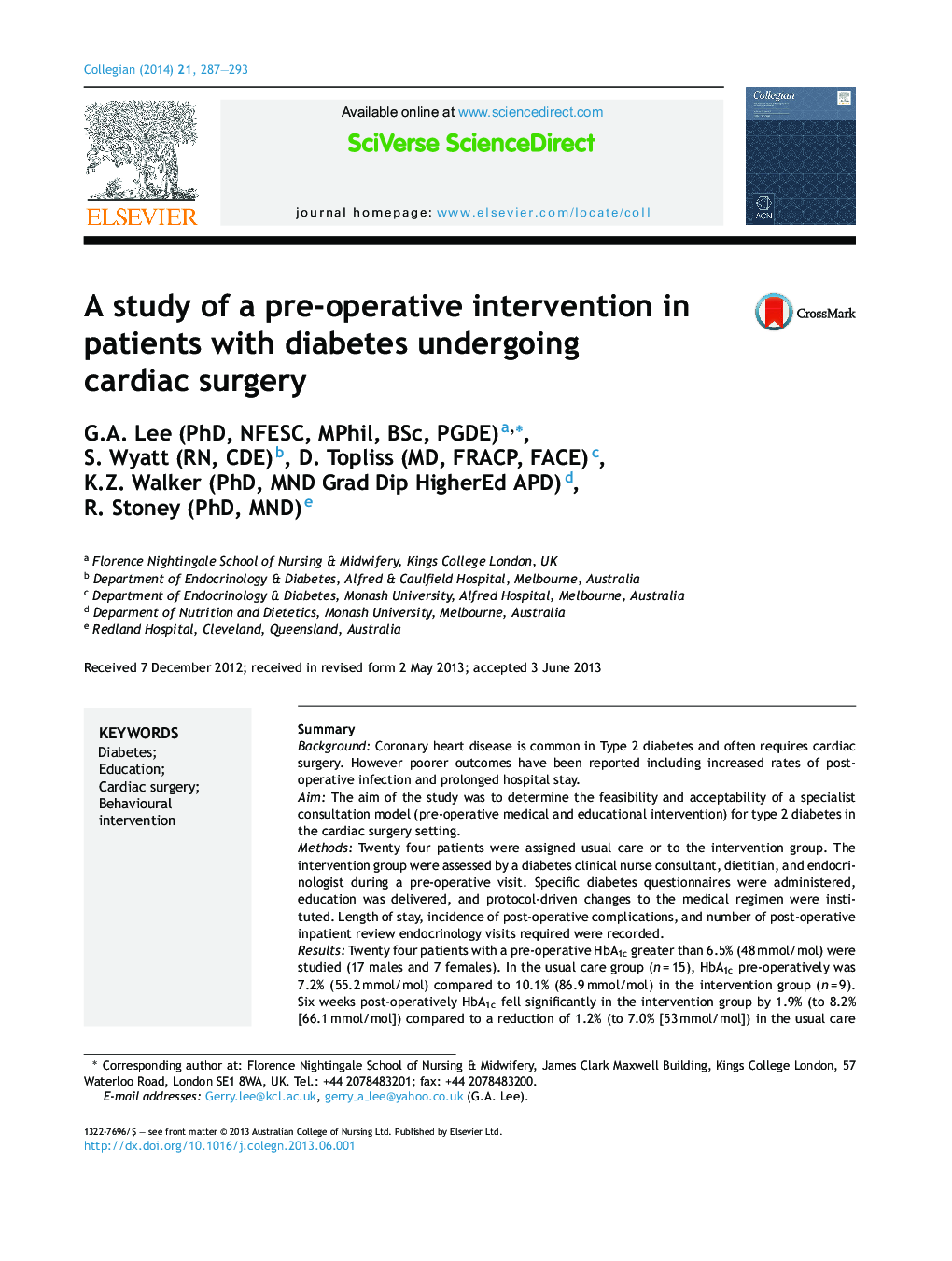 SummaryBackgroundCoronary heart disease is common in Type 2 diabetes and often requires cardiac surgery. However poorer outcomes have been reported including increased rates of post-operative infection and prolonged hospital stay.AimThe aim of the study was to determine the feasibility and acceptability of a specialist consultation model (pre-operative medical and educational intervention) for type 2 diabetes in the cardiac surgery setting.MethodsTwenty four patients were assigned usual care or to the intervention group. The intervention group were assessed by a diabetes clinical nurse consultant, dietitian, and endocrinologist during a pre-operative visit. Specific diabetes questionnaires were administered, education was delivered, and protocol-driven changes to the medical regimen were instituted. Length of stay, incidence of post-operative complications, and number of post-operative inpatient review endocrinology visits required were recorded.ResultsTwenty four patients with a pre-operative HbA1c greater than 6.5% (48 mmol/mol) were studied (17 males and 7 females). In the usual care group (n = 15), HbA1c pre-operatively was 7.2% (55.2 mmol/mol) compared to 10.1% (86.9 mmol/mol) in the intervention group (n = 9). Six weeks post-operatively HbA1c fell significantly in the intervention group by 1.9% (to 8.2% [66.1 mmol/mol]) compared to a reduction of 1.2% (to 7.0% [53 mmol/mol]) in the usual care group (p < 0.05). No significant differences were observed in length of stay in intensive care or in total hospital stay between the groups: length of ICU stay 54 h for intervention versus 47 h for usual care, total hospital stay (mean 8 days for both); or in rates of post-operative infection. Differences were seen between in the diabetes questionnaires: in the Problem Areas in Diabetes questionnaire and in the Diabetes Treatment Satisfaction Questionnaire (p = 0.048).ConclusionThis small pilot feasibility study suggests there is potential benefit in the acute optimisation of diabetes treatment before elective cardiac surgery.