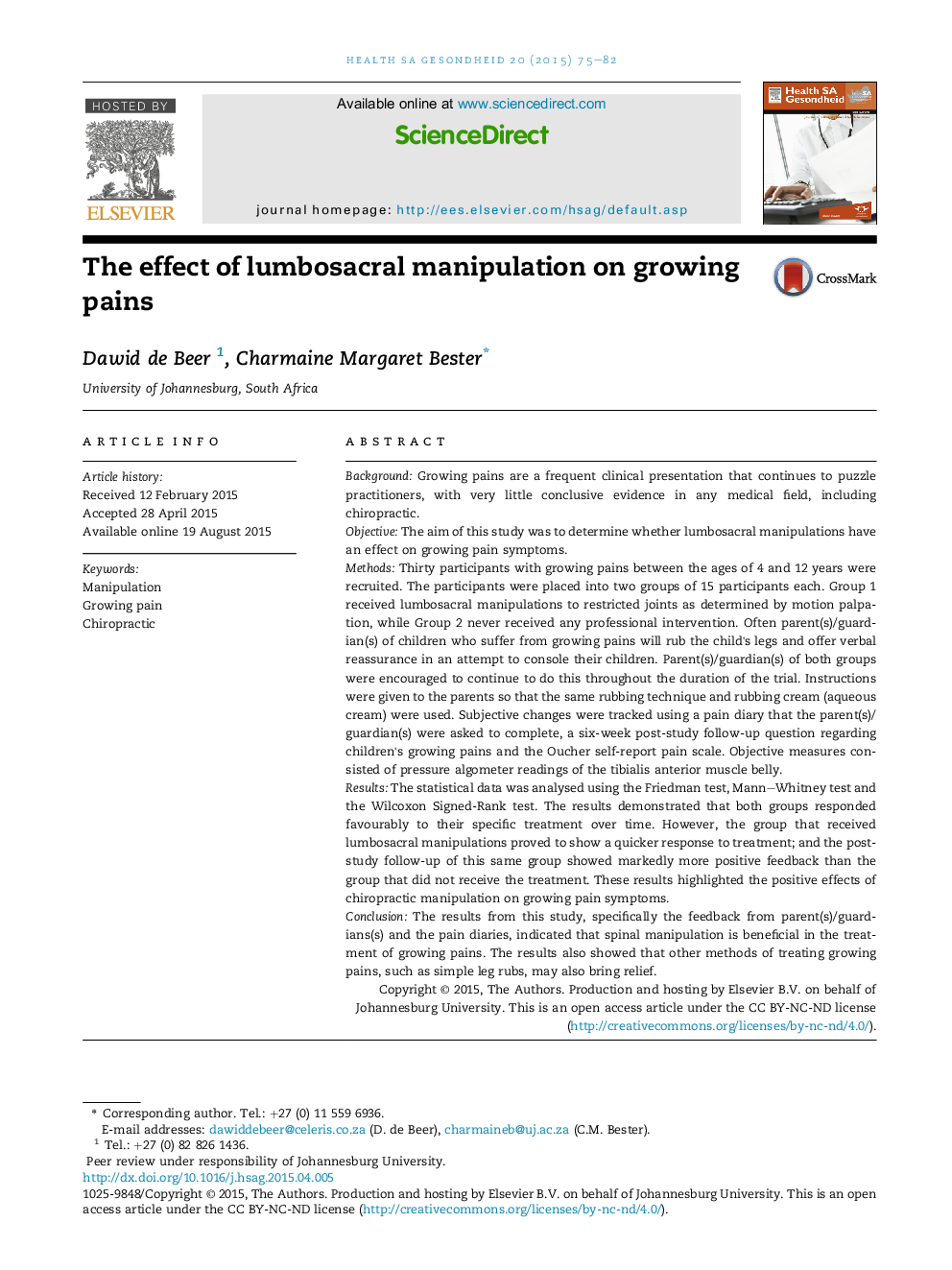 BackgroundGrowing pains are a frequent clinical presentation that continues to puzzle practitioners, with very little conclusive evidence in any medical field, including chiropractic.ObjectiveThe aim of this study was to determine whether lumbosacral manipulations have an effect on growing pain symptoms.MethodsThirty participants with growing pains between the ages of 4 and 12 years were recruited. The participants were placed into two groups of 15 participants each. Group 1 received lumbosacral manipulations to restricted joints as determined by motion palpation, while Group 2 never received any professional intervention. Often parent(s)/guardian(s) of children who suffer from growing pains will rub the child's legs and offer verbal reassurance in an attempt to console their children. Parent(s)/guardian(s) of both groups were encouraged to continue to do this throughout the duration of the trial. Instructions were given to the parents so that the same rubbing technique and rubbing cream (aqueous cream) were used. Subjective changes were tracked using a pain diary that the parent(s)/guardian(s) were asked to complete, a six-week post-study follow-up question regarding children's growing pains and the Oucher self-report pain scale. Objective measures consisted of pressure algometer readings of the tibialis anterior muscle belly.ResultsThe statistical data was analysed using the Friedman test, Mann–Whitney test and the Wilcoxon Signed-Rank test. The results demonstrated that both groups responded favourably to their specific treatment over time. However, the group that received lumbosacral manipulations proved to show a quicker response to treatment; and the post-study follow-up of this same group showed markedly more positive feedback than the group that did not receive the treatment. These results highlighted the positive effects of chiropractic manipulation on growing pain symptoms.ConclusionThe results from this study, specifically the feedback from parent(s)/guardians(s) and the pain diaries, indicated that spinal manipulation is beneficial in the treatment of growing pains. The results also showed that other methods of treating growing pains, such as simple leg rubs, may also bring relief.