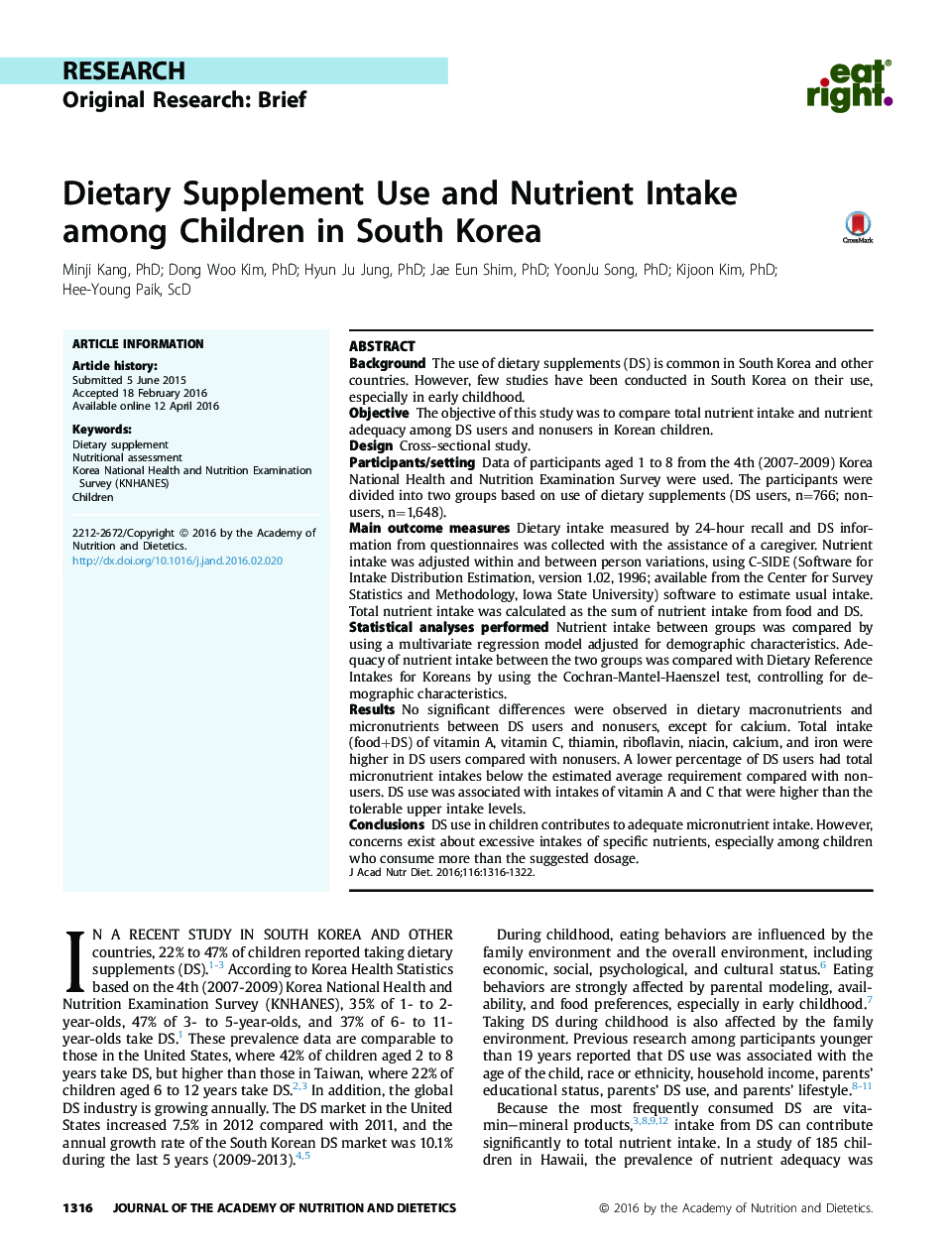 BackgroundThe use of dietary supplements (DS) is common in South Korea and other countries. However, few studies have been conducted in South Korea on their use, especially in early childhood.ObjectiveThe objective of this study was to compare total nutrient intake and nutrient adequacy among DS users and nonusers in Korean children.DesignCross-sectional study.Participants/settingData of participants aged 1 to 8 from the 4th (2007-2009) Korea National Health and Nutrition Examination Survey were used. The participants were divided into two groups based on use of dietary supplements (DS users, n=766; nonusers, n=1,648).Main outcome measuresDietary intake measured by 24-hour recall and DS information from questionnaires was collected with the assistance of a caregiver. Nutrient intake was adjusted within and between person variations, using C-SIDE (Software for Intake Distribution Estimation, version 1.02, 1996; available from the Center for Survey Statistics and Methodology, Iowa State University) software to estimate usual intake. Total nutrient intake was calculated as the sum of nutrient intake from food and DS.Statistical analyses performedNutrient intake between groups was compared by using a multivariate regression model adjusted for demographic characteristics. Adequacy of nutrient intake between the two groups was compared with Dietary Reference Intakes for Koreans by using the Cochran-Mantel-Haenszel test, controlling for demographic characteristics.ResultsNo significant differences were observed in dietary macronutrients and micronutrients between DS users and nonusers, except for calcium. Total intake (food+DS) of vitamin A, vitamin C, thiamin, riboflavin, niacin, calcium, and iron were higher in DS users compared with nonusers. A lower percentage of DS users had total micronutrient intakes below the estimated average requirement compared with nonusers. DS use was associated with intakes of vitamin A and C that were higher than the tolerable upper intake levels.ConclusionsDS use in children contributes to adequate micronutrient intake. However, concerns exist about excessive intakes of specific nutrients, especially among children who consume more than the suggested dosage.