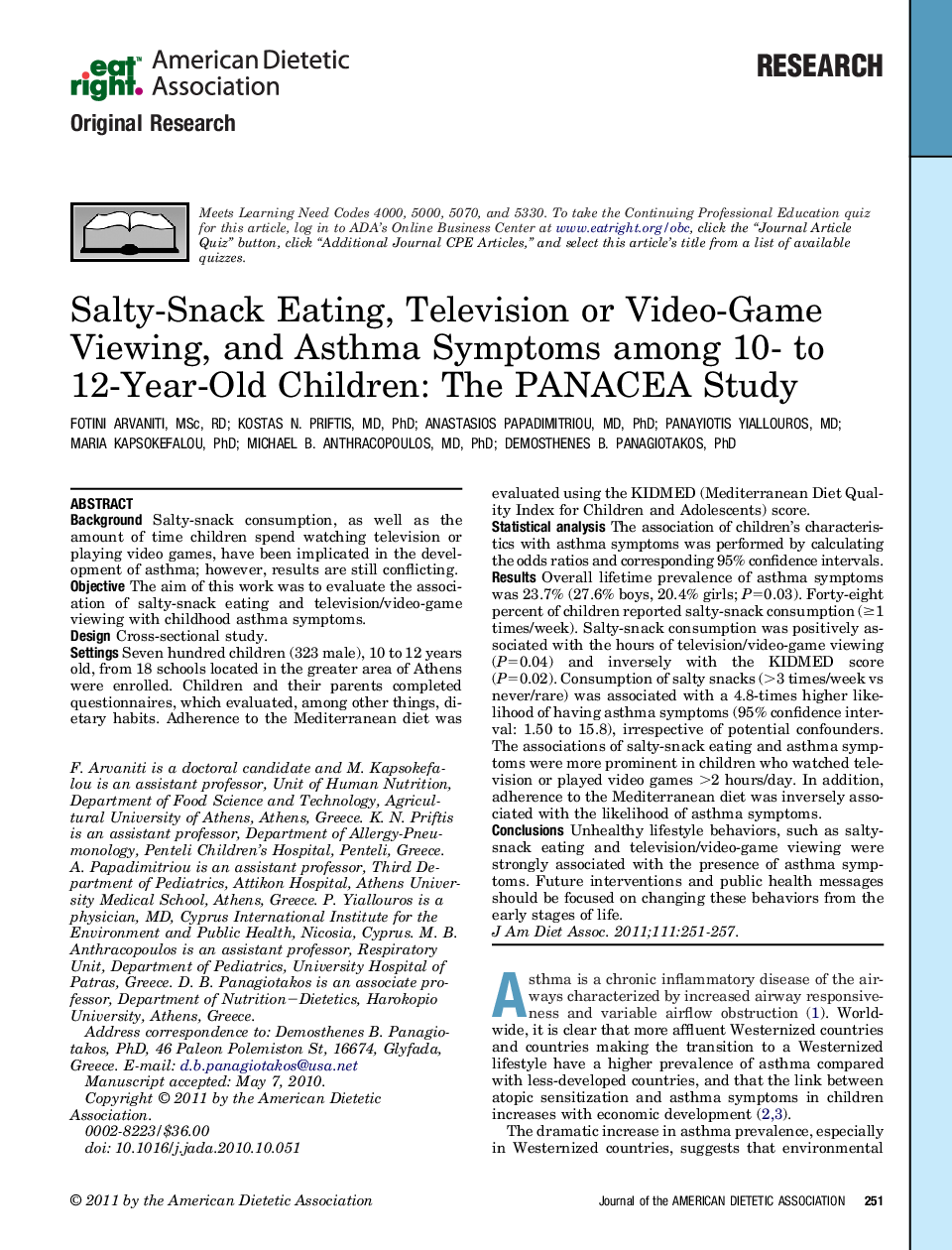 BackgroundSalty-snack consumption, as well as the amount of time children spend watching television or playing video games, have been implicated in the development of asthma; however, results are still conflicting.ObjectiveThe aim of this work was to evaluate the association of salty-snack eating and television/video-game viewing with childhood asthma symptoms.DesignCross-sectional study.SettingsSeven hundred children (323 male), 10 to 12 years old, from 18 schools located in the greater area of Athens were enrolled. Children and their parents completed questionnaires, which evaluated, among other things, dietary habits. Adherence to the Mediterranean diet was evaluated using the KIDMED (Mediterranean Diet Quality Index for Children and Adolescents) score.Statistical analysisThe association of children's characteristics with asthma symptoms was performed by calculating the odds ratios and corresponding 95% confidence intervals.ResultsOverall lifetime prevalence of asthma symptoms was 23.7% (27.6% boys, 20.4% girls; P=0.03). Forty-eight percent of children reported salty-snack consumption (≥1 times/week). Salty-snack consumption was positively associated with the hours of television/video-game viewing (P=0.04) and inversely with the KIDMED score (P=0.02). Consumption of salty snacks (>3 times/week vs never/rare) was associated with a 4.8-times higher likelihood of having asthma symptoms (95% confidence interval: 1.50 to 15.8), irrespective of potential confounders. The associations of salty-snack eating and asthma symptoms were more prominent in children who watched television or played video games >2 hours/day. In addition, adherence to the Mediterranean diet was inversely associated with the likelihood of asthma symptoms.ConclusionsUnhealthy lifestyle behaviors, such as salty-snack eating and television/video-game viewing were strongly associated with the presence of asthma symptoms. Future interventions and public health messages should be focused on changing these behaviors from the early stages of life.