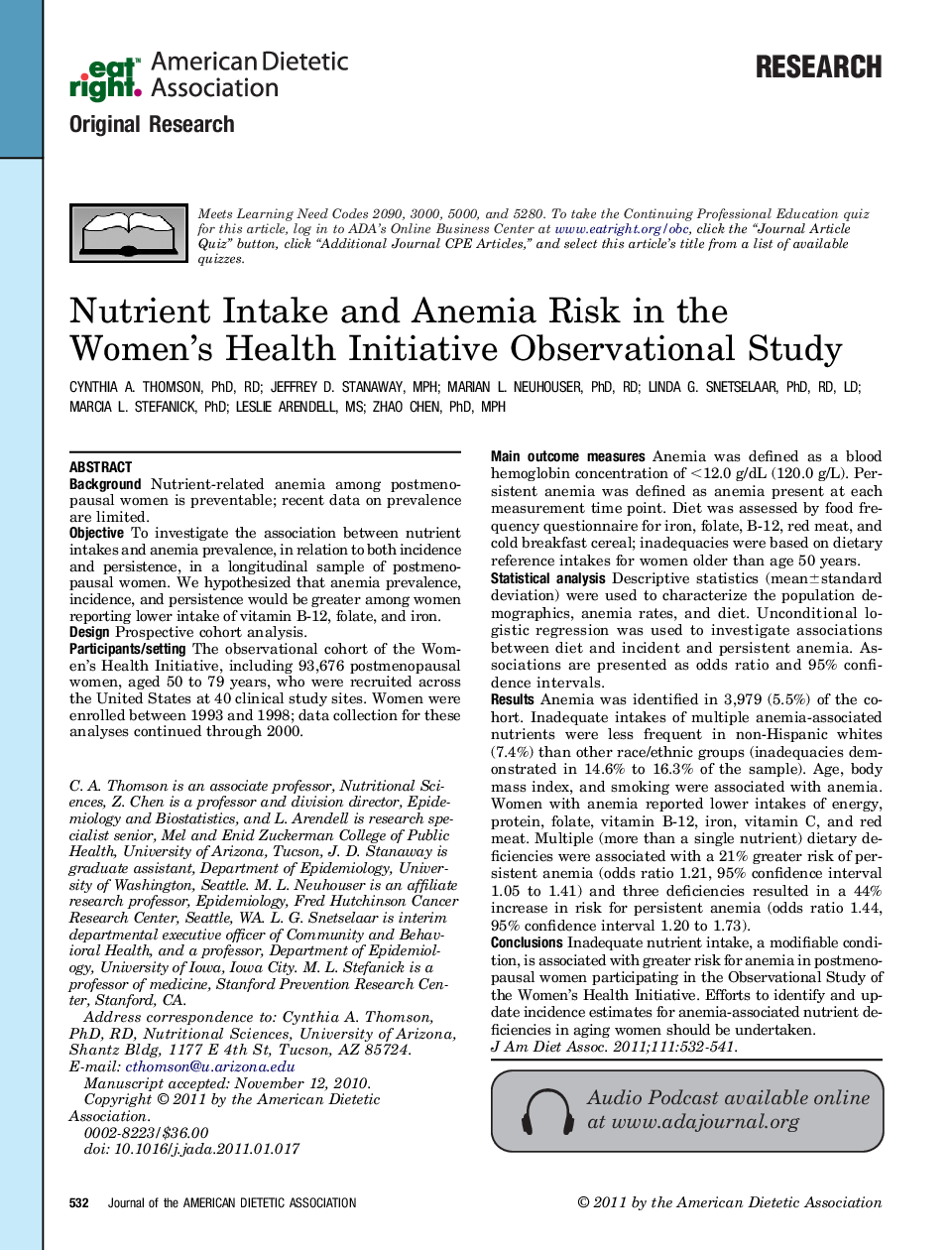 BackgroundNutrient-related anemia among postmenopausal women is preventable; recent data on prevalence are limited.ObjectiveTo investigate the association between nutrient intakes and anemia prevalence, in relation to both incidence and persistence, in a longitudinal sample of postmenopausal women. We hypothesized that anemia prevalence, incidence, and persistence would be greater among women reporting lower intake of vitamin B-12, folate, and iron.DesignProspective cohort analysis.Participants/settingThe observational cohort of the Women's Health Initiative, including 93,676 postmenopausal women, aged 50 to 79 years, who were recruited across the United States at 40 clinical study sites. Women were enrolled between 1993 and 1998; data collection for these analyses continued through 2000.Main outcome measuresAnemia was defined as a blood hemoglobin concentration of <12.0 g/dL (120.0 g/L). Persistent anemia was defined as anemia present at each measurement time point. Diet was assessed by food frequency questionnaire for iron, folate, B-12, red meat, and cold breakfast cereal; inadequacies were based on dietary reference intakes for women older than age 50 years.Statistical analysisDescriptive statistics (mean±standard deviation) were used to characterize the population demographics, anemia rates, and diet. Unconditional logistic regression was used to investigate associations between diet and incident and persistent anemia. Associations are presented as odds ratio and 95% confidence intervals.ResultsAnemia was identified in 3,979 (5.5%) of the cohort. Inadequate intakes of multiple anemia-associated nutrients were less frequent in non-Hispanic whites (7.4%) than other race/ethnic groups (inadequacies demonstrated in 14.6% to 16.3% of the sample). Age, body mass index, and smoking were associated with anemia. Women with anemia reported lower intakes of energy, protein, folate, vitamin B-12, iron, vitamin C, and red meat. Multiple (more than a single nutrient) dietary deficiencies were associated with a 21% greater risk of persistent anemia (odds ratio 1.21, 95% confidence interval 1.05 to 1.41) and three deficiencies resulted in a 44% increase in risk for persistent anemia (odds ratio 1.44, 95% confidence interval 1.20 to 1.73).ConclusionsInadequate nutrient intake, a modifiable condition, is associated with greater risk for anemia in postmenopausal women participating in the Observational Study of the Women's Health Initiative. Efforts to identify and update incidence estimates for anemia-associated nutrient deficiencies in aging women should be undertaken.