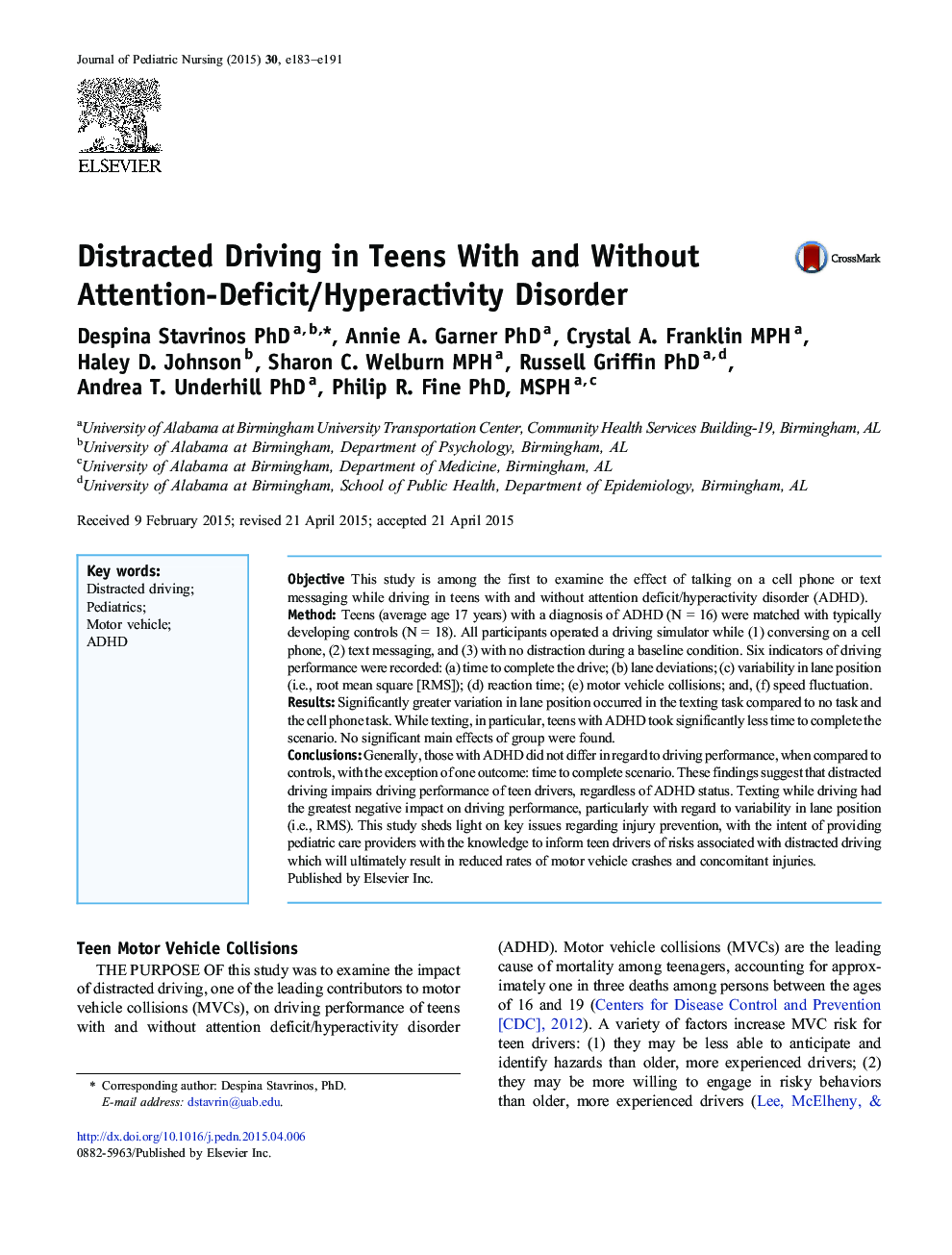 • This study assessed the distractibility of teen drivers with and without ADHD-C.
• Differences in the distraction caused by both cell phone conversations and text messaging while driving were analyzed and compared across individuals with and without ADHD.
• Generally, those with ADHD-C did not differ in their driving performance compared to controls with the exception of one outcome: drivers with ADHD-C took significantly less time to complete the scenario while texting, suggesting that they failed to display compensatory behavior (e.g., slowing of speed) to the same degree as drivers without ADHD-C.
• Findings suggest that texting while driving had the greatest negative impact on driving performance, as indicated by increased variation in lane position as compared to talking on a cell phone or driving with no other secondary task.
• This information could be used by pediatric care providers and other front-line health care workers who can impact prevention efforts for reducing motor vehicle crashes.

ObjectiveThis study is among the first to examine the effect of talking on a cell phone or text messaging while driving in teens with and without attention deficit/hyperactivity disorder (ADHD).MethodTeens (average age 17 years) with a diagnosis of ADHD (N = 16) were matched with typically developing controls (N = 18). All participants operated a driving simulator while (1) conversing on a cell phone, (2) text messaging, and (3) with no distraction during a baseline condition. Six indicators of driving performance were recorded: (a) time to complete the drive; (b) lane deviations; (c) variability in lane position (i.e., root mean square [RMS]); (d) reaction time; (e) motor vehicle collisions; and, (f) speed fluctuation.ResultsSignificantly greater variation in lane position occurred in the texting task compared to no task and the cell phone task. While texting, in particular, teens with ADHD took significantly less time to complete the scenario. No significant main effects of group were found.ConclusionsGenerally, those with ADHD did not differ in regard to driving performance, when compared to controls, with the exception of one outcome: time to complete scenario. These findings suggest that distracted driving impairs driving performance of teen drivers, regardless of ADHD status. Texting while driving had the greatest negative impact on driving performance, particularly with regard to variability in lane position (i.e., RMS). This study sheds light on key issues regarding injury prevention, with the intent of providing pediatric care providers with the knowledge to inform teen drivers of risks associated with distracted driving which will ultimately result in reduced rates of motor vehicle crashes and concomitant injuries.