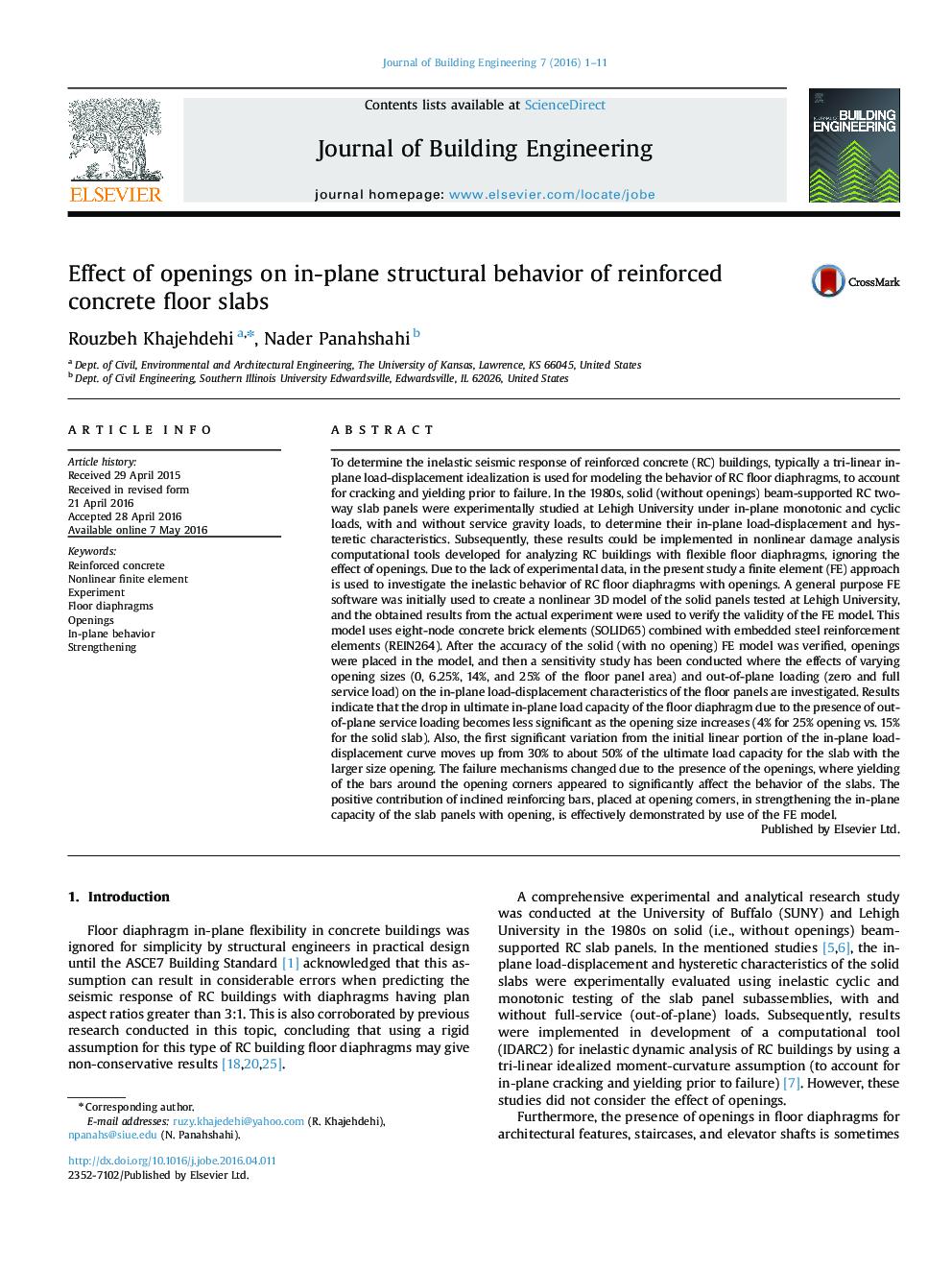 • The results of experiments conducted on solid slabs are used to create a valid FE model.
• The effect of openings are investigated on in-plane behavior of RC slabs.
• Openings (25%) decreased in-plane load carrying capacity of slabs by 15%.
• Additional plastic hinges formed at opening corners changed failure mechanisms.
• The change in behavior caused by openings must be considered in building design especially seismic design.

To determine the inelastic seismic response of reinforced concrete (RC) buildings, typically a tri-linear in-plane load-displacement idealization is used for modeling the behavior of RC floor diaphragms, to account for cracking and yielding prior to failure. In the 1980s, solid (without openings) beam-supported RC two-way slab panels were experimentally studied at Lehigh University under in-plane monotonic and cyclic loads, with and without service gravity loads, to determine their in-plane load-displacement and hysteretic characteristics. Subsequently, these results could be implemented in nonlinear damage analysis computational tools developed for analyzing RC buildings with flexible floor diaphragms, ignoring the effect of openings. Due to the lack of experimental data, in the present study a finite element (FE) approach is used to investigate the inelastic behavior of RC floor diaphragms with openings. A general purpose FE software was initially used to create a nonlinear 3D model of the solid panels tested at Lehigh University, and the obtained results from the actual experiment were used to verify the validity of the FE model. This model uses eight-node concrete brick elements (SOLID65) combined with embedded steel reinforcement elements (REIN264). After the accuracy of the solid (with no opening) FE model was verified, openings were placed in the model, and then a sensitivity study has been conducted where the effects of varying opening sizes (0, 6.25%, 14%, and 25% of the floor panel area) and out-of-plane loading (zero and full service load) on the in-plane load-displacement characteristics of the floor panels are investigated. Results indicate that the drop in ultimate in-plane load capacity of the floor diaphragm due to the presence of out-of-plane service loading becomes less significant as the opening size increases (4% for 25% opening vs. 15% for the solid slab). Also, the first significant variation from the initial linear portion of the in-plane load-displacement curve moves up from 30% to about 50% of the ultimate load capacity for the slab with the larger size opening. The failure mechanisms changed due to the presence of the openings, where yielding of the bars around the opening corners appeared to significantly affect the behavior of the slabs. The positive contribution of inclined reinforcing bars, placed at opening corners, in strengthening the in-plane capacity of the slab panels with opening, is effectively demonstrated by use of the FE model.