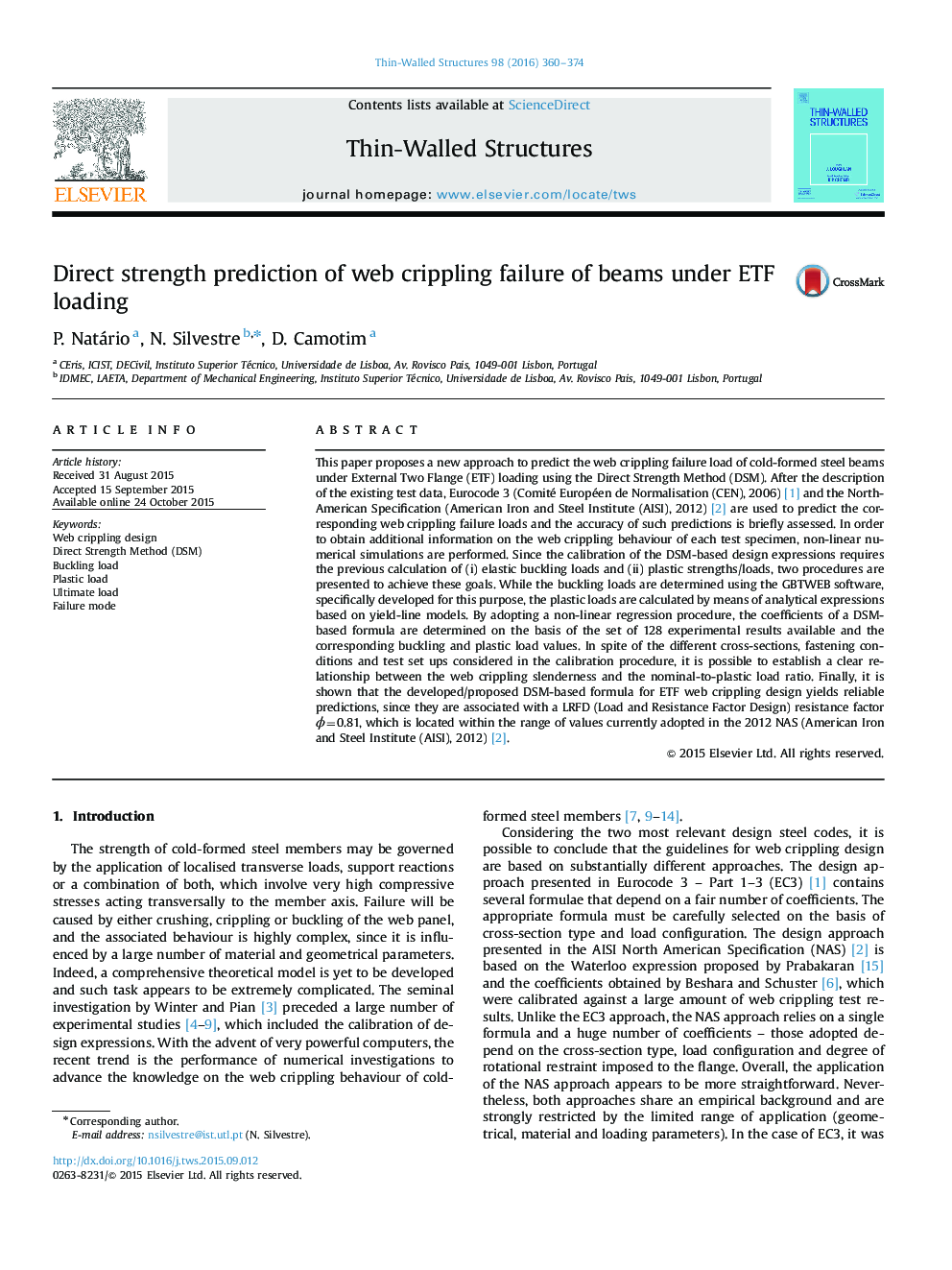 • Web crippling failure of cold-formed steel beams under External Two Flange (ETF) is studied.
• Direct Strength Method (DSM) curve for web crippling design is proposed for the first time.
• Experimental results of 128 test specimens (different cross-sections) available in literature were used for calibration.
• Buckling and plastic loads are calculated using GBTWEB software and yield-line formulas, respectively.
• Resistance factor ϕ=0.81 (LRFD) is located within the range of the values that are proposed in the NAS for web crippling design.

This paper proposes a new approach to predict the web crippling failure load of cold-formed steel beams under External Two Flange (ETF) loading using the Direct Strength Method (DSM). After the description of the existing test data, Eurocode 3 (Comité Européen de Normalisation (CEN), 2006) [1] and the North-American Specification (American Iron and Steel Institute (AISI), 2012) [2] are used to predict the corresponding web crippling failure loads and the accuracy of such predictions is briefly assessed. In order to obtain additional information on the web crippling behaviour of each test specimen, non-linear numerical simulations are performed. Since the calibration of the DSM-based design expressions requires the previous calculation of (i) elastic buckling loads and (ii) plastic strengths/loads, two procedures are presented to achieve these goals. While the buckling loads are determined using the GBTWEB software, specifically developed for this purpose, the plastic loads are calculated by means of analytical expressions based on yield-line models. By adopting a non-linear regression procedure, the coefficients of a DSM-based formula are determined on the basis of the set of 128 experimental results available and the corresponding buckling and plastic load values. In spite of the different cross-sections, fastening conditions and test set ups considered in the calibration procedure, it is possible to establish a clear relationship between the web crippling slenderness and the nominal-to-plastic load ratio. Finally, it is shown that the developed/proposed DSM-based formula for ETF web crippling design yields reliable predictions, since they are associated with a LRFD (Load and Resistance Factor Design) resistance factor ϕ=0.81, which is located within the range of values currently adopted in the 2012 NAS (American Iron and Steel Institute (AISI), 2012) [2].