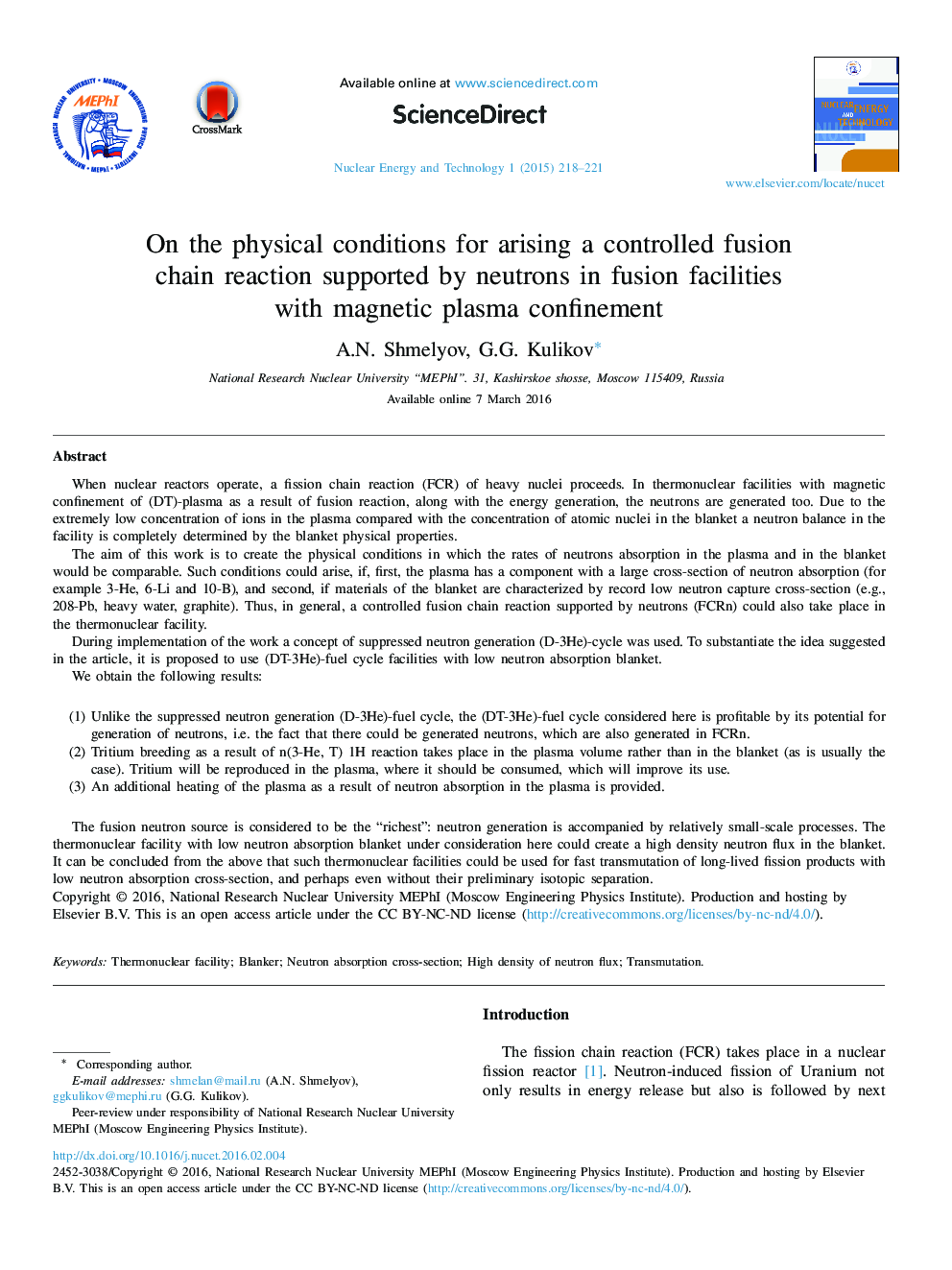 When nuclear reactors operate, a fission chain reaction (FCR) of heavy nuclei proceeds. In thermonuclear facilities with magnetic confinement of (DT)-plasma as a result of fusion reaction, along with the energy generation, the neutrons are generated too. Due to the extremely low concentration of ions in the plasma compared with the concentration of atomic nuclei in the blanket a neutron balance in the facility is completely determined by the blanket physical properties.The aim of this work is to create the physical conditions in which the rates of neutrons absorption in the plasma and in the blanket would be comparable. Such conditions could arise, if, first, the plasma has a component with a large cross-section of neutron absorption (for example 3-He, 6-Li and 10-B), and second, if materials of the blanket are characterized by record low neutron capture cross-section (e.g., 208-Pb, heavy water, graphite). Thus, in general, a controlled fusion chain reaction supported by neutrons (FCRn) could also take place in the thermonuclear facility.During implementation of the work a concept of suppressed neutron generation (D-3He)-cycle was used. To substantiate the idea suggested in the article, it is proposed to use (DT-3He)-fuel cycle facilities with low neutron absorption blanket.We obtain the following results:(1)Unlike the suppressed neutron generation (D-3He)-fuel cycle, the (DT-3He)-fuel cycle considered here is profitable by its potential for generation of neutrons, i.e. the fact that there could be generated neutrons, which are also generated in FCRn.(2)Tritium breeding as a result of n(3-He, T) 1H reaction takes place in the plasma volume rather than in the blanket (as is usually the case). Tritium will be reproduced in the plasma, where it should be consumed, which will improve its use.(3)An additional heating of the plasma as a result of neutron absorption in the plasma is provided.The fusion neutron source is considered to be the “richest”: neutron generation is accompanied by relatively small-scale processes. The thermonuclear facility with low neutron absorption blanket under consideration here could create a high density neutron flux in the blanket. It can be concluded from the above that such thermonuclear facilities could be used for fast transmutation of long-lived fission products with low neutron absorption cross-section, and perhaps even without their preliminary isotopic separation.