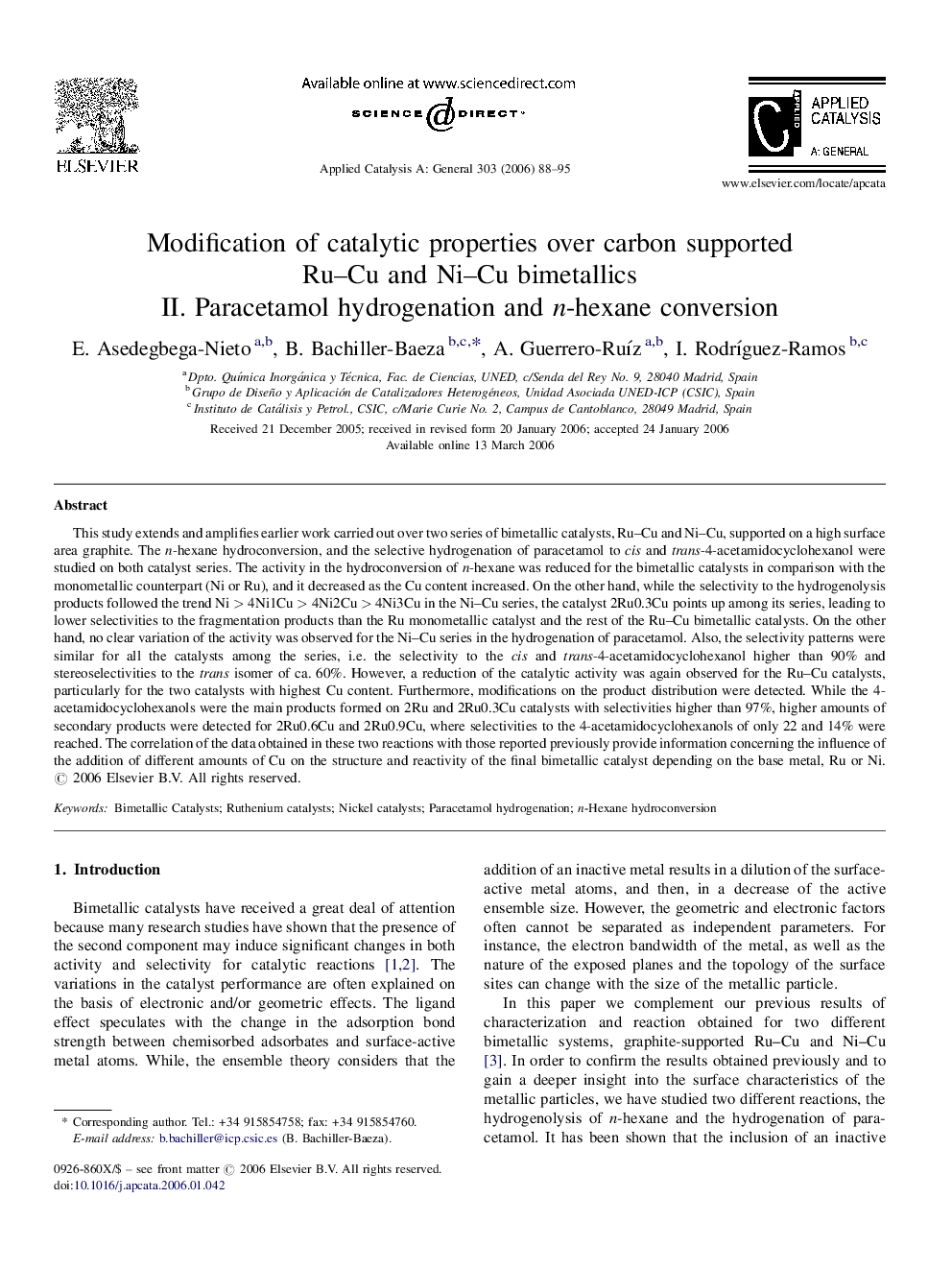 This study extends and amplifies earlier work carried out over two series of bimetallic catalysts, Ru–Cu and Ni–Cu, supported on a high surface area graphite. The n-hexane hydroconversion, and the selective hydrogenation of paracetamol to cis and trans-4-acetamidocyclohexanol were studied on both catalyst series. The activity in the hydroconversion of n-hexane was reduced for the bimetallic catalysts in comparison with the monometallic counterpart (Ni or Ru), and it decreased as the Cu content increased. On the other hand, while the selectivity to the hydrogenolysis products followed the trend Ni > 4Ni1Cu > 4Ni2Cu > 4Ni3Cu in the Ni–Cu series, the catalyst 2Ru0.3Cu points up among its series, leading to lower selectivities to the fragmentation products than the Ru monometallic catalyst and the rest of the Ru–Cu bimetallic catalysts. On the other hand, no clear variation of the activity was observed for the Ni–Cu series in the hydrogenation of paracetamol. Also, the selectivity patterns were similar for all the catalysts among the series, i.e. the selectivity to the cis and trans-4-acetamidocyclohexanol higher than 90% and stereoselectivities to the trans isomer of ca. 60%. However, a reduction of the catalytic activity was again observed for the Ru–Cu catalysts, particularly for the two catalysts with highest Cu content. Furthermore, modifications on the product distribution were detected. While the 4-acetamidocyclohexanols were the main products formed on 2Ru and 2Ru0.3Cu catalysts with selectivities higher than 97%, higher amounts of secondary products were detected for 2Ru0.6Cu and 2Ru0.9Cu, where selectivities to the 4-acetamidocyclohexanols of only 22 and 14% were reached. The correlation of the data obtained in these two reactions with those reported previously provide information concerning the influence of the addition of different amounts of Cu on the structure and reactivity of the final bimetallic catalyst depending on the base metal, Ru or Ni.