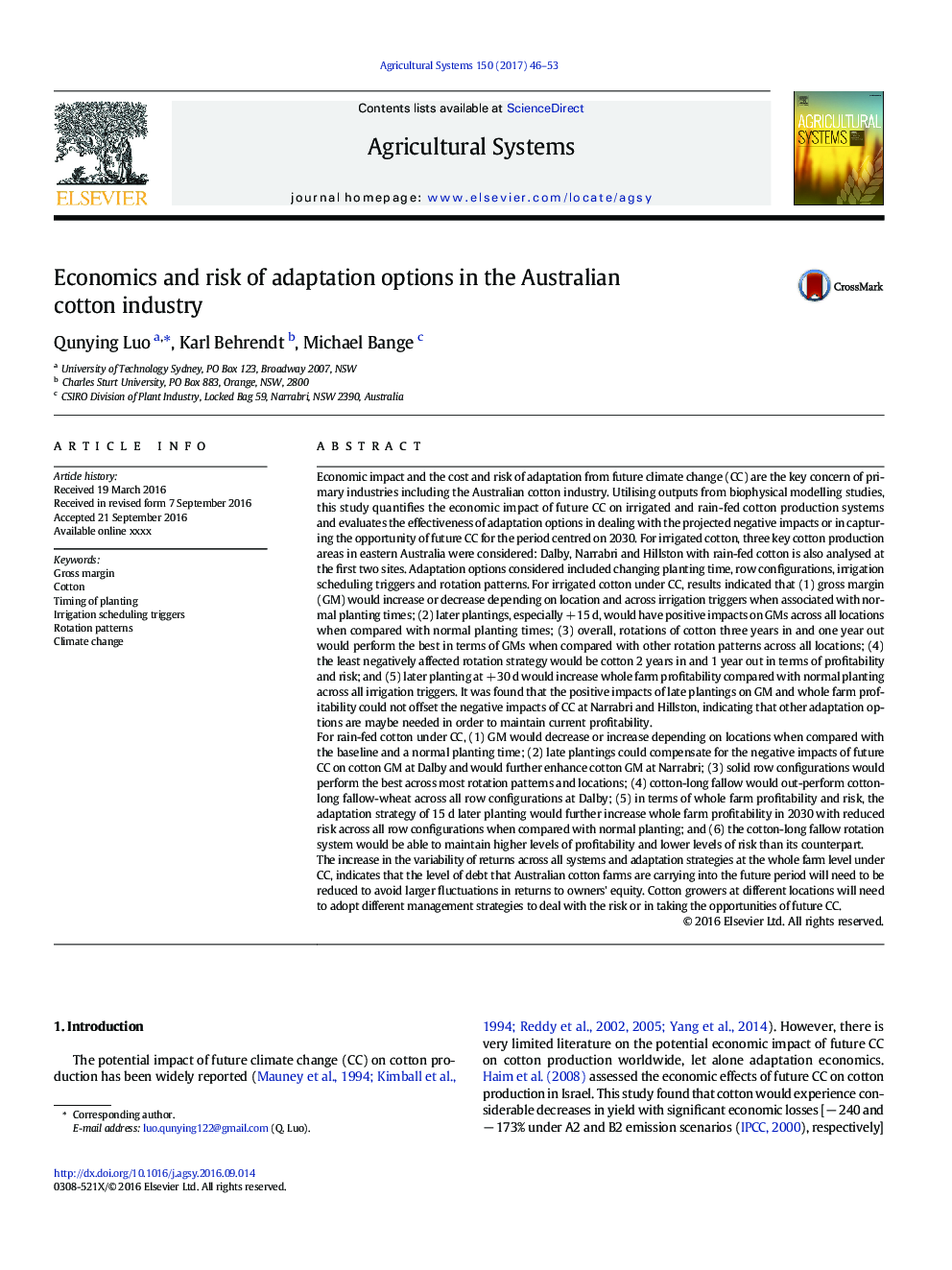 • Late sowing would be a cost-effective adaptation strategy for rain-fed cotton.
• Late sowing wouldn't offset economic impact of climate change on irrigated cotton.
• A 70 mm irrigation trigger would continue to provide higher returns than its rival.
• Rotation patterns need to be combined with other strategies for profitable business.

Economic impact and the cost and risk of adaptation from future climate change (CC) are the key concern of primary industries including the Australian cotton industry. Utilising outputs from biophysical modelling studies, this study quantifies the economic impact of future CC on irrigated and rain-fed cotton production systems and evaluates the effectiveness of adaptation options in dealing with the projected negative impacts or in capturing the opportunity of future CC for the period centred on 2030. For irrigated cotton, three key cotton production areas in eastern Australia were considered: Dalby, Narrabri and Hillston with rain-fed cotton is also analysed at the first two sites. Adaptation options considered included changing planting time, row configurations, irrigation scheduling triggers and rotation patterns. For irrigated cotton under CC, results indicated that (1) gross margin (GM) would increase or decrease depending on location and across irrigation triggers when associated with normal planting times; (2) later plantings, especially + 15 d, would have positive impacts on GMs across all locations when compared with normal planting times; (3) overall, rotations of cotton three years in and one year out would perform the best in terms of GMs when compared with other rotation patterns across all locations; (4) the least negatively affected rotation strategy would be cotton 2 years in and 1 year out in terms of profitability and risk; and (5) later planting at + 30 d would increase whole farm profitability compared with normal planting across all irrigation triggers. It was found that the positive impacts of late plantings on GM and whole farm profitability could not offset the negative impacts of CC at Narrabri and Hillston, indicating that other adaptation options are maybe needed in order to maintain current profitability.For rain-fed cotton under CC, (1) GM would decrease or increase depending on locations when compared with the baseline and a normal planting time; (2) late plantings could compensate for the negative impacts of future CC on cotton GM at Dalby and would further enhance cotton GM at Narrabri; (3) solid row configurations would perform the best across most rotation patterns and locations; (4) cotton-long fallow would out-perform cotton-long fallow-wheat across all row configurations at Dalby; (5) in terms of whole farm profitability and risk, the adaptation strategy of 15 d later planting would further increase whole farm profitability in 2030 with reduced risk across all row configurations when compared with normal planting; and (6) the cotton-long fallow rotation system would be able to maintain higher levels of profitability and lower levels of risk than its counterpart.The increase in the variability of returns across all systems and adaptation strategies at the whole farm level under CC, indicates that the level of debt that Australian cotton farms are carrying into the future period will need to be reduced to avoid larger fluctuations in returns to owners' equity. Cotton growers at different locations will need to adopt different management strategies to deal with the risk or in taking the opportunities of future CC.