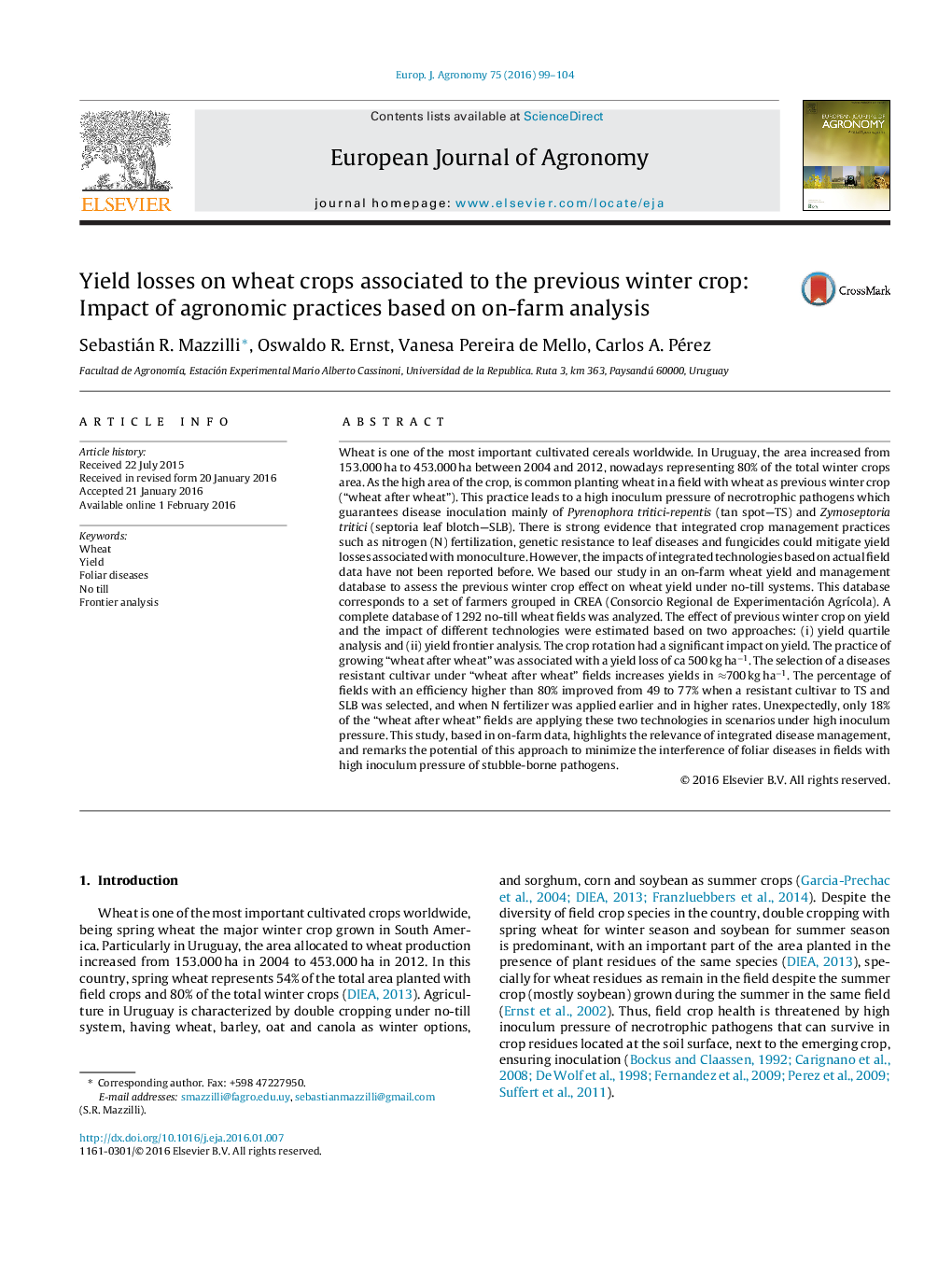 • Crop rotation had a significant impact on wheat yield.
• “Wheat after wheat” was associated with a yield loss of 500 kg ha−1.
• Resistant cultivar and adjusted N fertilization improved production efficiency.
• Only 18% of the fields showed integrated technology for “wheat after wheat” scenarios.

Wheat is one of the most important cultivated cereals worldwide. In Uruguay, the area increased from 153.000 ha to 453.000 ha between 2004 and 2012, nowadays representing 80% of the total winter crops area. As the high area of the crop, is common planting wheat in a field with wheat as previous winter crop (“wheat after wheat”). This practice leads to a high inoculum pressure of necrotrophic pathogens which guarantees disease inoculation mainly of Pyrenophora tritici-repentis (tan spot—TS) and Zymoseptoria tritici (septoria leaf blotch—SLB). There is strong evidence that integrated crop management practices such as nitrogen (N) fertilization, genetic resistance to leaf diseases and fungicides could mitigate yield losses associated with monoculture. However, the impacts of integrated technologies based on actual field data have not been reported before. We based our study in an on-farm wheat yield and management database to assess the previous winter crop effect on wheat yield under no-till systems. This database corresponds to a set of farmers grouped in CREA (Consorcio Regional de Experimentación Agrícola). A complete database of 1292 no-till wheat fields was analyzed. The effect of previous winter crop on yield and the impact of different technologies were estimated based on two approaches: (i) yield quartile analysis and (ii) yield frontier analysis. The crop rotation had a significant impact on yield. The practice of growing “wheat after wheat” was associated with a yield loss of ca 500 kg ha−1. The selection of a diseases resistant cultivar under “wheat after wheat” fields increases yields in ≈700 kg ha−1. The percentage of fields with an efficiency higher than 80% improved from 49 to 77% when a resistant cultivar to TS and SLB was selected, and when N fertilizer was applied earlier and in higher rates. Unexpectedly, only 18% of the “wheat after wheat” fields are applying these two technologies in scenarios under high inoculum pressure. This study, based in on-farm data, highlights the relevance of integrated disease management, and remarks the potential of this approach to minimize the interference of foliar diseases in fields with high inoculum pressure of stubble-borne pathogens.