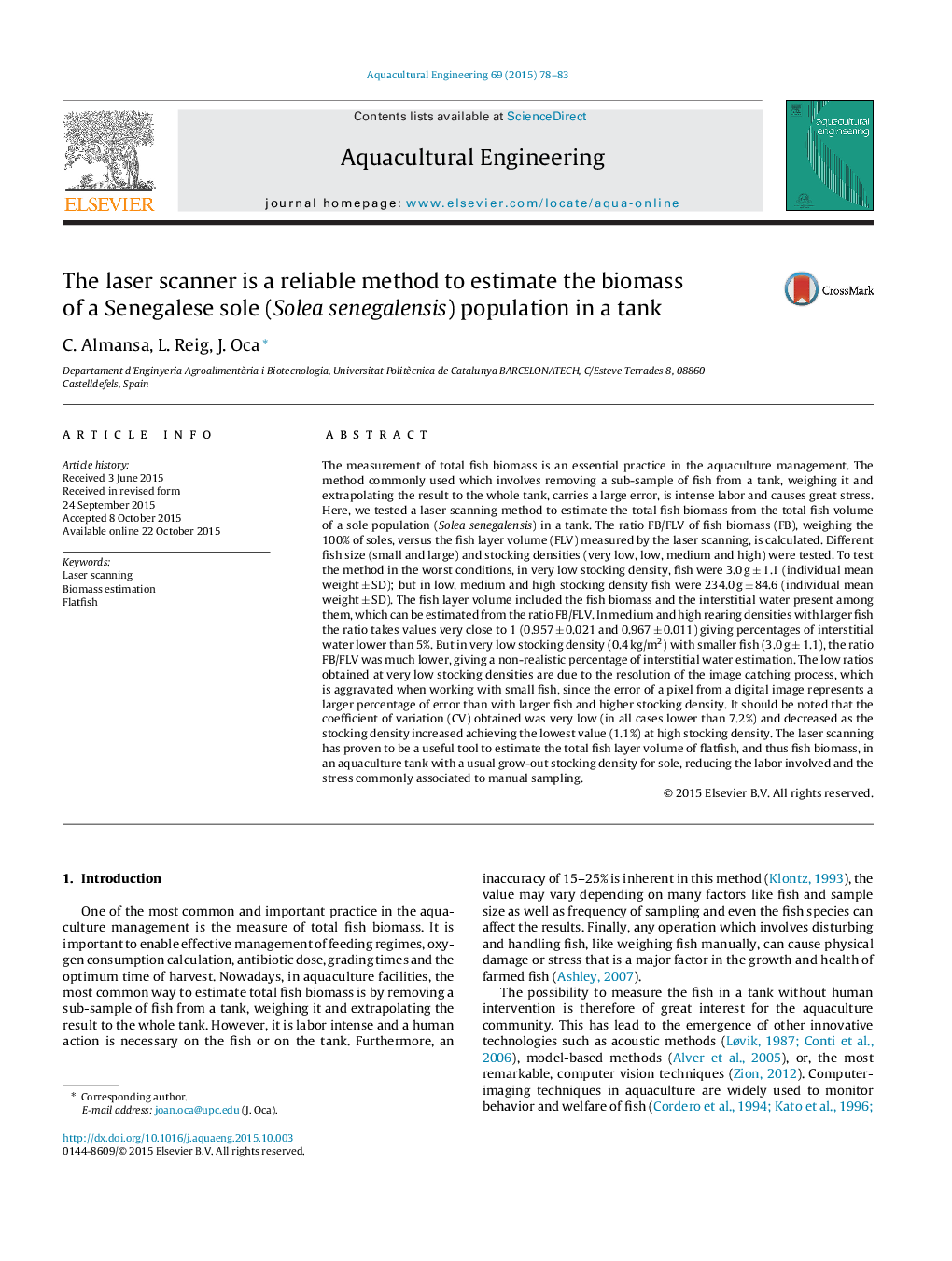 The measurement of total fish biomass is an essential practice in the aquaculture management. The method commonly used which involves removing a sub-sample of fish from a tank, weighing it and extrapolating the result to the whole tank, carries a large error, is intense labor and causes great stress. Here, we tested a laser scanning method to estimate the total fish biomass from the total fish volume of a sole population (Solea senegalensis) in a tank. The ratio FB/FLV of fish biomass (FB), weighing the 100% of soles, versus the fish layer volume (FLV) measured by the laser scanning, is calculated. Different fish size (small and large) and stocking densities (very low, low, medium and high) were tested. To test the method in the worst conditions, in very low stocking density, fish were 3.0 g ± 1.1 (individual mean weight ± SD); but in low, medium and high stocking density fish were 234.0 g ± 84.6 (individual mean weight ± SD). The fish layer volume included the fish biomass and the interstitial water present among them, which can be estimated from the ratio FB/FLV. In medium and high rearing densities with larger fish the ratio takes values very close to 1 (0.957 ± 0.021 and 0.967 ± 0.011) giving percentages of interstitial water lower than 5%. But in very low stocking density (0.4 kg/m2) with smaller fish (3.0 g ± 1.1), the ratio FB/FLV was much lower, giving a non-realistic percentage of interstitial water estimation. The low ratios obtained at very low stocking densities are due to the resolution of the image catching process, which is aggravated when working with small fish, since the error of a pixel from a digital image represents a larger percentage of error than with larger fish and higher stocking density. It should be noted that the coefficient of variation (CV) obtained was very low (in all cases lower than 7.2%) and decreased as the stocking density increased achieving the lowest value (1.1%) at high stocking density. The laser scanning has proven to be a useful tool to estimate the total fish layer volume of flatfish, and thus fish biomass, in an aquaculture tank with a usual grow-out stocking density for sole, reducing the labor involved and the stress commonly associated to manual sampling.