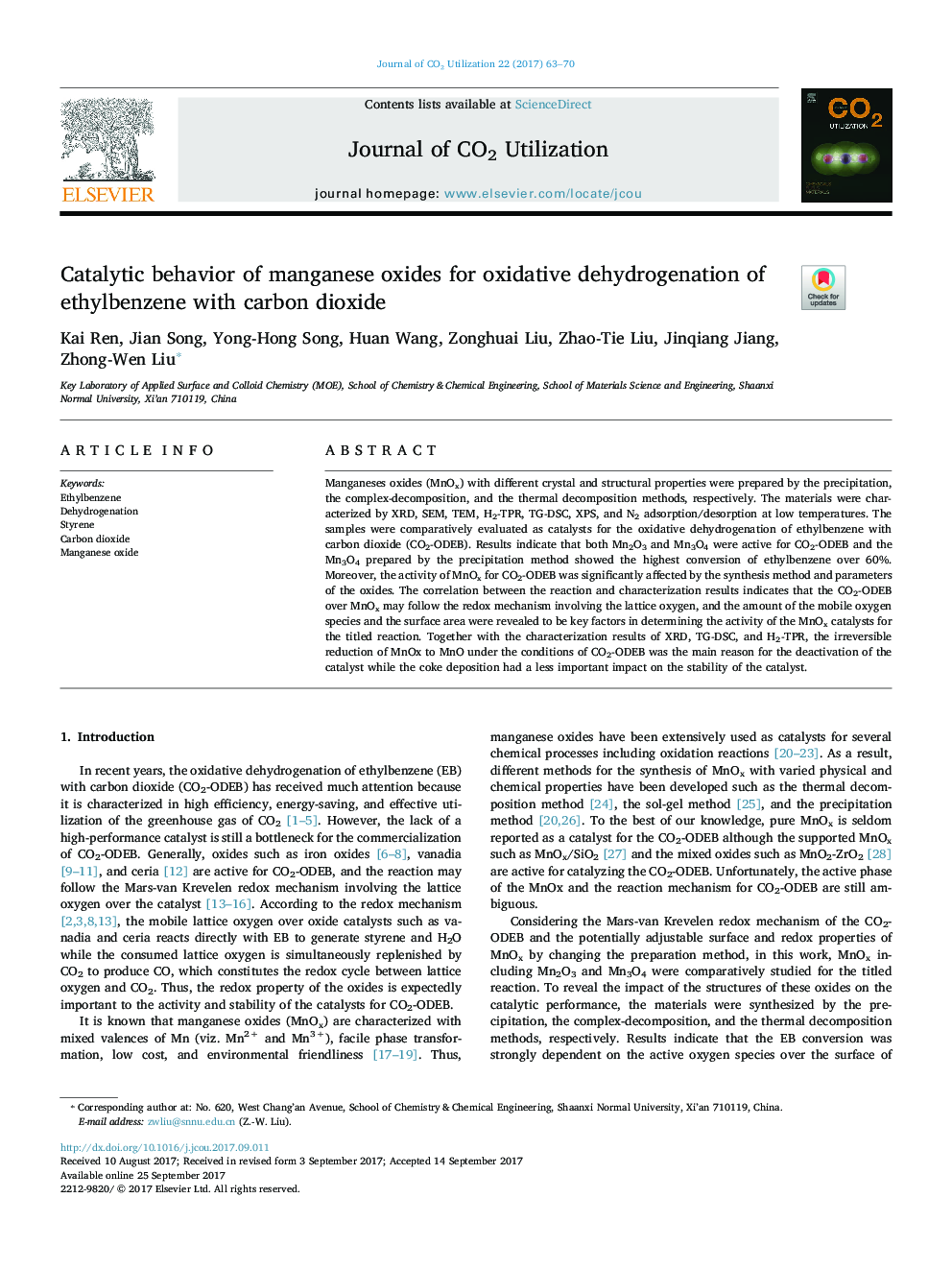 چکیده انگلیسی
Manganeses oxides (MnOx) with different crystal and structural properties were prepared by the precipitation, the complex-decomposition, and the thermal decomposition methods, respectively. The materials were characterized by XRD, SEM, TEM, H2-TPR, TG-DSC, XPS, and N2 adsorption/desorption at low temperatures. The samples were comparatively evaluated as catalysts for the oxidative dehydrogenation of ethylbenzene with carbon dioxide (CO2-ODEB). Results indicate that both Mn2O3 and Mn3O4 were active for CO2-ODEB and the Mn3O4 prepared by the precipitation method showed the highest conversion of ethylbenzene over 60%. Moreover, the activity of MnOx for CO2-ODEB was significantly affected by the synthesis method and parameters of the oxides. The correlation between the reaction and characterization results indicates that the CO2-ODEB over MnOx may follow the redox mechanism involving the lattice oxygen, and the amount of the mobile oxygen species and the surface area were revealed to be key factors in determining the activity of the MnOx catalysts for the titled reaction. Together with the characterization results of XRD, TG-DSC, and H2-TPR, the irreversible reduction of MnOx to MnO under the conditions of CO2-ODEB was the main reason for the deactivation of the catalyst while the coke deposition had a less important impact on the stability of the catalyst.
ناشر
Database: Elsevier - ScienceDirect (ساینس دایرکت)
Journal: Journal of CO2 Utilization - Volume 22, December 2017, Pages 63-70
نویسندگان
Kai Ren, Jian Song, Yong-Hong Song, Huan Wang, Zonghuai Liu, Zhao-Tie Liu, Jinqiang Jiang, Zhong-Wen Liu,
دانلود مقاله + سفارش ترجمه
دانلود مقاله ISI انگلیسی
رایگان برای ایرانیان
سفارش ترجمه تخصصی
با تضمین قیمت و کیفیت
منتشر شده در