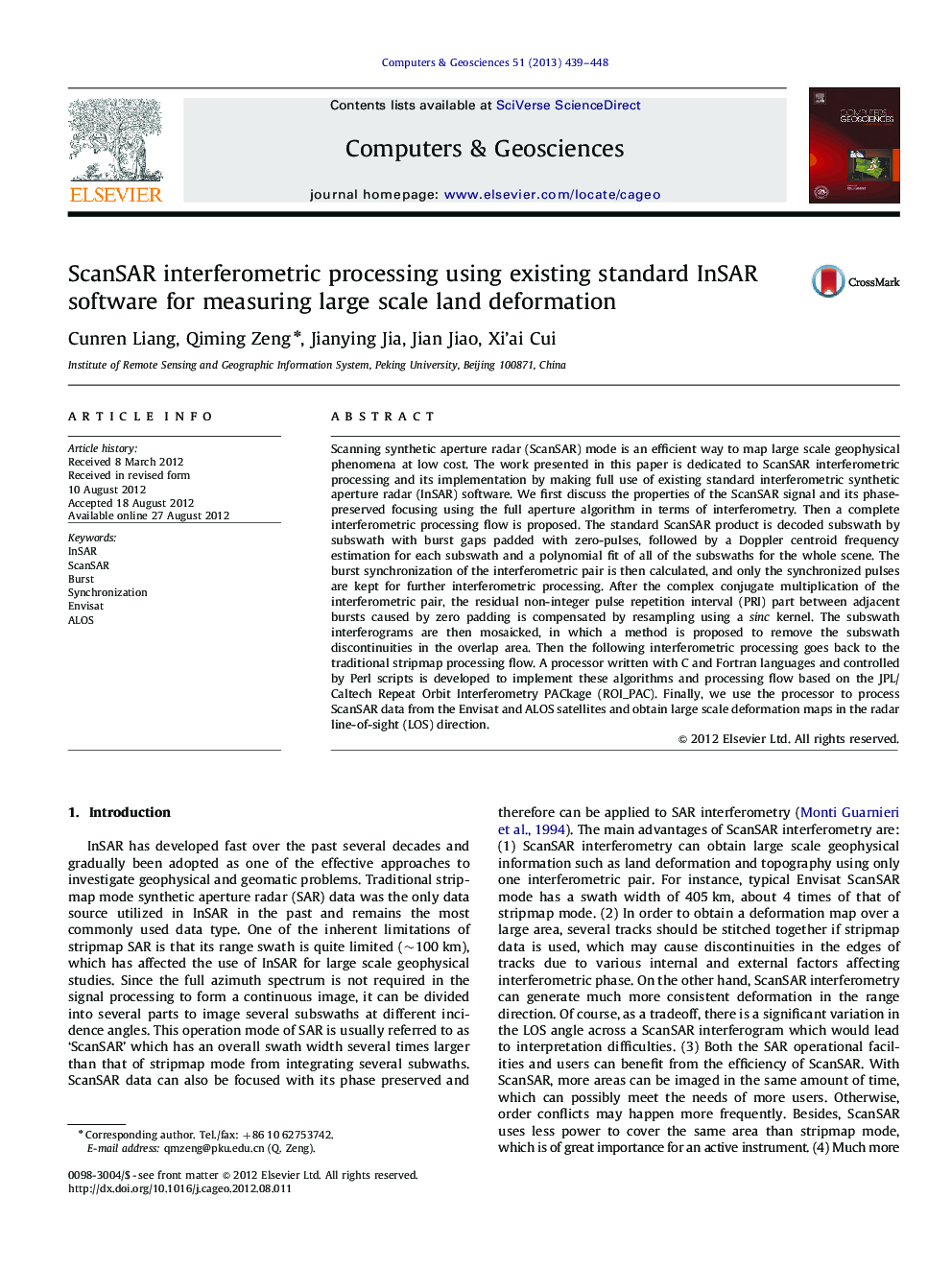 Scanning synthetic aperture radar (ScanSAR) mode is an efficient way to map large scale geophysical phenomena at low cost. The work presented in this paper is dedicated to ScanSAR interferometric processing and its implementation by making full use of existing standard interferometric synthetic aperture radar (InSAR) software. We first discuss the properties of the ScanSAR signal and its phase-preserved focusing using the full aperture algorithm in terms of interferometry. Then a complete interferometric processing flow is proposed. The standard ScanSAR product is decoded subswath by subswath with burst gaps padded with zero-pulses, followed by a Doppler centroid frequency estimation for each subswath and a polynomial fit of all of the subswaths for the whole scene. The burst synchronization of the interferometric pair is then calculated, and only the synchronized pulses are kept for further interferometric processing. After the complex conjugate multiplication of the interferometric pair, the residual non-integer pulse repetition interval (PRI) part between adjacent bursts caused by zero padding is compensated by resampling using a sinc kernel. The subswath interferograms are then mosaicked, in which a method is proposed to remove the subswath discontinuities in the overlap area. Then the following interferometric processing goes back to the traditional stripmap processing flow. A processor written with C and Fortran languages and controlled by Perl scripts is developed to implement these algorithms and processing flow based on the JPL/Caltech Repeat Orbit Interferometry PACkage (ROI_PAC). Finally, we use the processor to process ScanSAR data from the Envisat and ALOS satellites and obtain large scale deformation maps in the radar line-of-sight (LOS) direction.

► We have developed an approach to process ScanSAR InSAR data.
► The approach will promote the use of ScanSAR InSAR in geophysics and other fields.
► We obtained large scale land deformation maps using Envisat and ALOS ScanSAR data.
► The precision of the two examples processed are comparable with that of stripmap mode.
► ROI_pac is now able to process ScanSAR data combining with the codes.