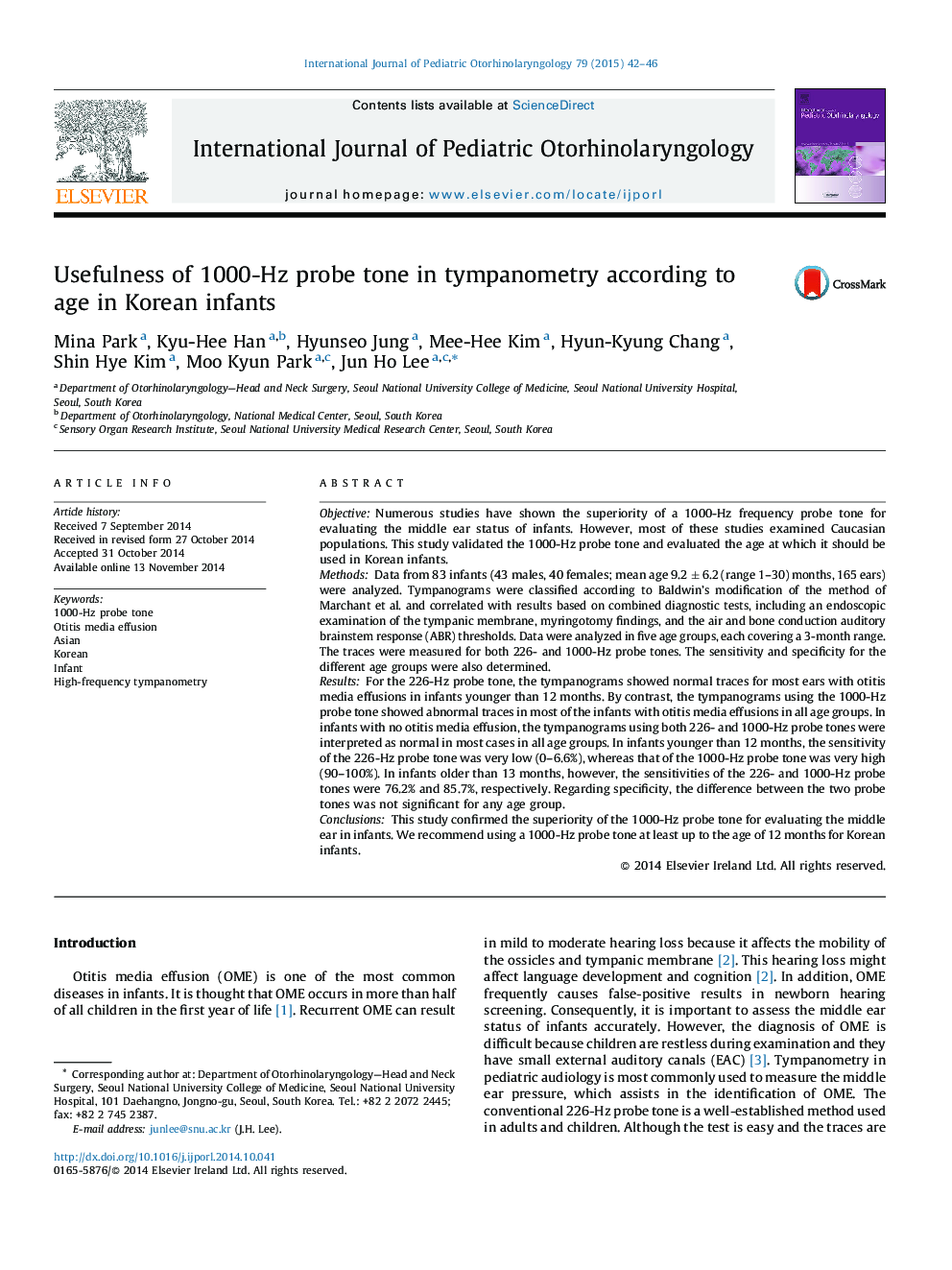 ObjectiveNumerous studies have shown the superiority of a 1000-Hz frequency probe tone for evaluating the middle ear status of infants. However, most of these studies examined Caucasian populations. This study validated the 1000-Hz probe tone and evaluated the age at which it should be used in Korean infants.MethodsData from 83 infants (43 males, 40 females; mean age 9.2Â Â±Â 6.2 (range 1-30) months, 165 ears) were analyzed. Tympanograms were classified according to Baldwin's modification of the method of Marchant et al. and correlated with results based on combined diagnostic tests, including an endoscopic examination of the tympanic membrane, myringotomy findings, and the air and bone conduction auditory brainstem response (ABR) thresholds. Data were analyzed in five age groups, each covering a 3-month range. The traces were measured for both 226- and 1000-Hz probe tones. The sensitivity and specificity for the different age groups were also determined.ResultsFor the 226-Hz probe tone, the tympanograms showed normal traces for most ears with otitis media effusions in infants younger than 12 months. By contrast, the tympanograms using the 1000-Hz probe tone showed abnormal traces in most of the infants with otitis media effusions in all age groups. In infants with no otitis media effusion, the tympanograms using both 226- and 1000-Hz probe tones were interpreted as normal in most cases in all age groups. In infants younger than 12 months, the sensitivity of the 226-Hz probe tone was very low (0-6.6%), whereas that of the 1000-Hz probe tone was very high (90-100%). In infants older than 13 months, however, the sensitivities of the 226- and 1000-Hz probe tones were 76.2% and 85.7%, respectively. Regarding specificity, the difference between the two probe tones was not significant for any age group.ConclusionsThis study confirmed the superiority of the 1000-Hz probe tone for evaluating the middle ear in infants. We recommend using a 1000-Hz probe tone at least up to the age of 12 months for Korean infants.