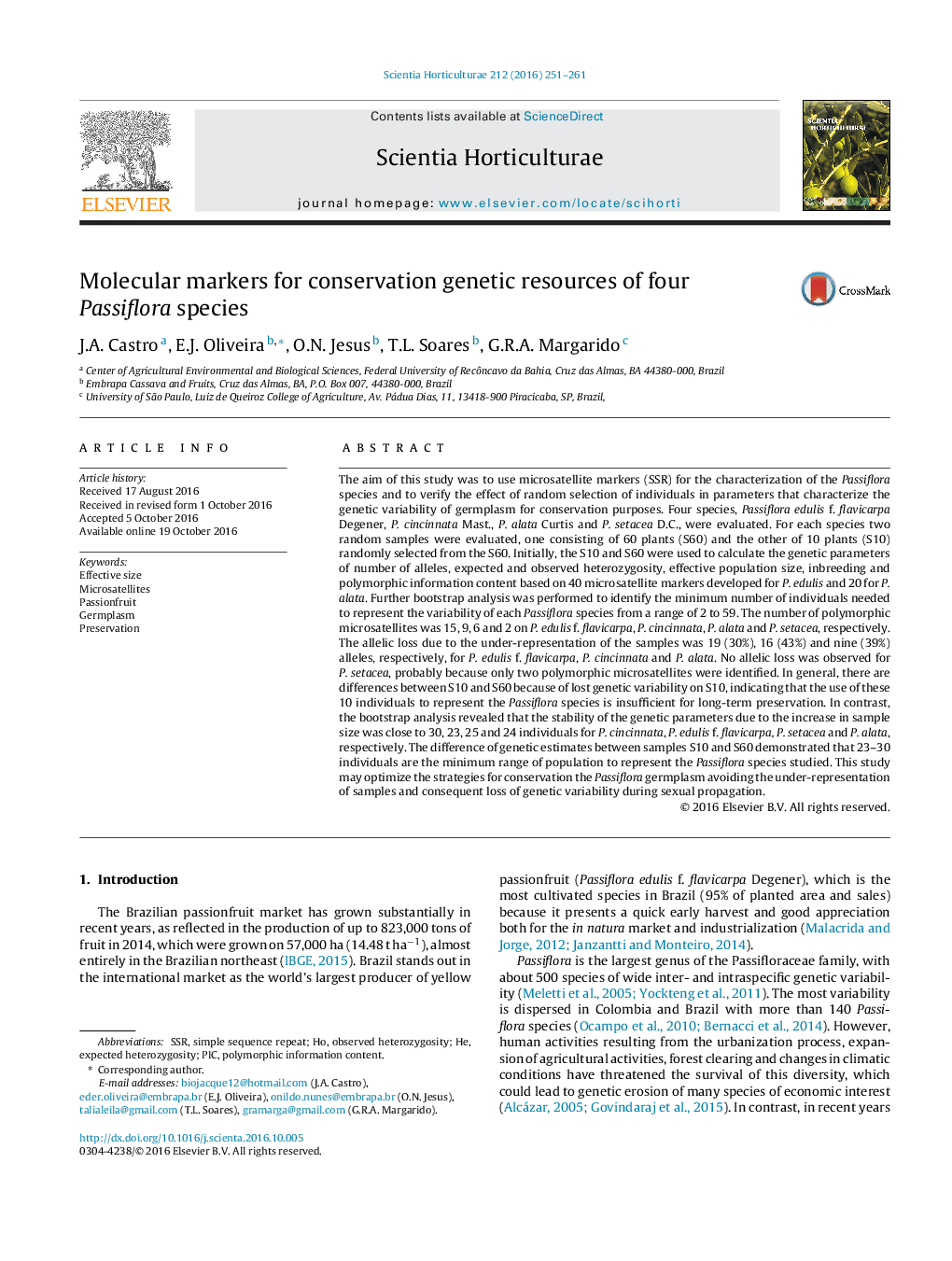 The aim of this study was to use microsatellite markers (SSR) for the characterization of the Passiflora species and to verify the effect of random selection of individuals in parameters that characterize the genetic variability of germplasm for conservation purposes. Four species, Passiflora edulis f. flavicarpa Degener, P. cincinnata Mast., P. alata Curtis and P. setacea D.C., were evaluated. For each species two random samples were evaluated, one consisting of 60 plants (S60) and the other of 10 plants (S10) randomly selected from the S60. Initially, the S10 and S60 were used to calculate the genetic parameters of number of alleles, expected and observed heterozygosity, effective population size, inbreeding and polymorphic information content based on 40 microsatellite markers developed for P. edulis and 20 for P. alata. Further bootstrap analysis was performed to identify the minimum number of individuals needed to represent the variability of each Passiflora species from a range of 2 to 59. The number of polymorphic microsatellites was 15, 9, 6 and 2 on P. edulis f. flavicarpa, P. cincinnata, P. alata and P. setacea, respectively. The allelic loss due to the under-representation of the samples was 19 (30%), 16 (43%) and nine (39%) alleles, respectively, for P. edulis f. flavicarpa, P. cincinnata and P. alata. No allelic loss was observed for P. setacea, probably because only two polymorphic microsatellites were identified. In general, there are differences between S10 and S60 because of lost genetic variability on S10, indicating that the use of these 10 individuals to represent the Passiflora species is insufficient for long-term preservation. In contrast, the bootstrap analysis revealed that the stability of the genetic parameters due to the increase in sample size was close to 30, 23, 25 and 24 individuals for P. cincinnata, P. edulis f. flavicarpa, P. setacea and P. alata, respectively. The difference of genetic estimates between samples S10 and S60 demonstrated that 23-30 individuals are the minimum range of population to represent the Passiflora species studied. This study may optimize the strategies for conservation the Passiflora germplasm avoiding the under-representation of samples and consequent loss of genetic variability during sexual propagation.