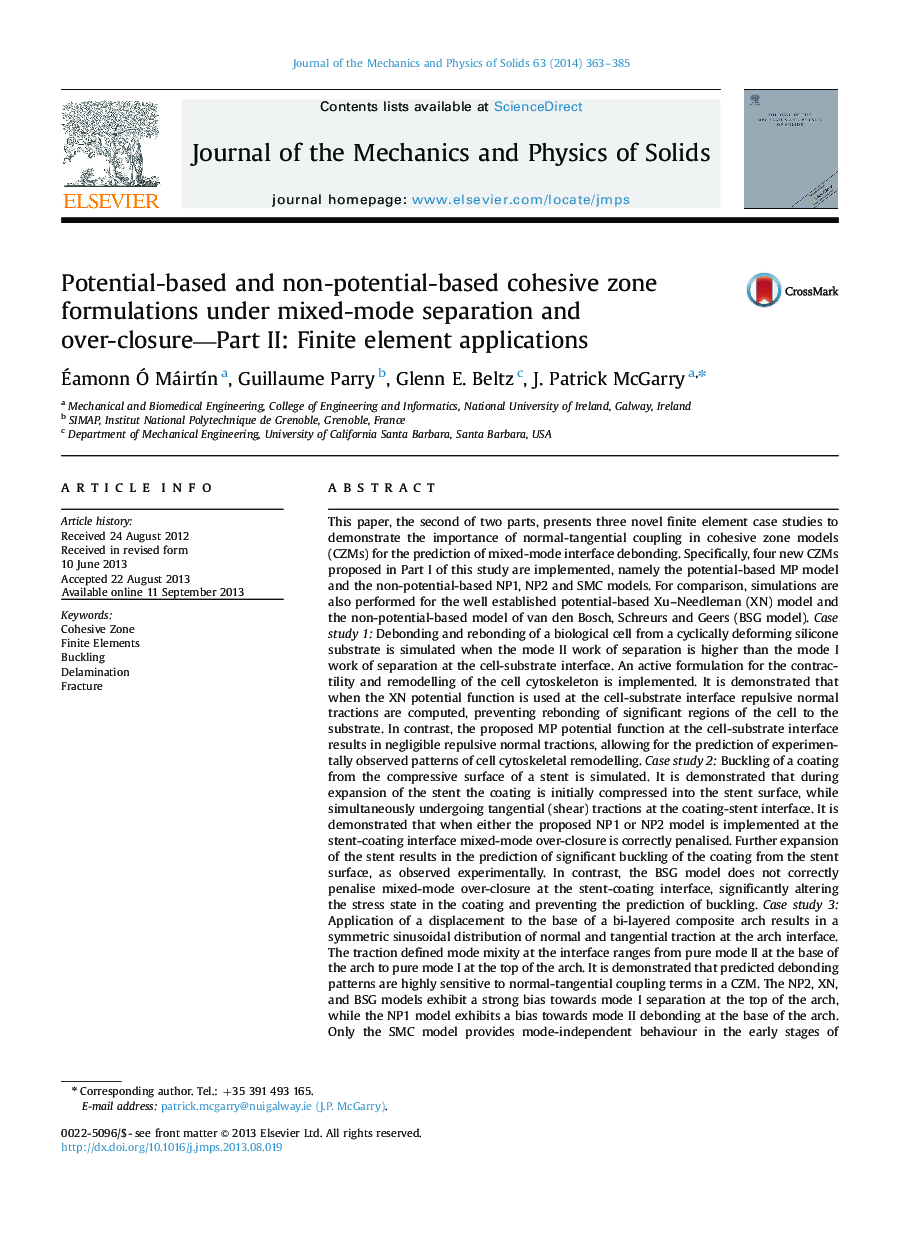 This paper, the second of two parts, presents three novel finite element case studies to demonstrate the importance of normal-tangential coupling in cohesive zone models (CZMs) for the prediction of mixed-mode interface debonding. Specifically, four new CZMs proposed in Part I of this study are implemented, namely the potential-based MP model and the non-potential-based NP1, NP2 and SMC models. For comparison, simulations are also performed for the well established potential-based Xu–Needleman (XN) model and the non-potential-based model of van den Bosch, Schreurs and Geers (BSG model). Case study 1: Debonding and rebonding of a biological cell from a cyclically deforming silicone substrate is simulated when the mode II work of separation is higher than the mode I work of separation at the cell-substrate interface. An active formulation for the contractility and remodelling of the cell cytoskeleton is implemented. It is demonstrated that when the XN potential function is used at the cell-substrate interface repulsive normal tractions are computed, preventing rebonding of significant regions of the cell to the substrate. In contrast, the proposed MP potential function at the cell-substrate interface results in negligible repulsive normal tractions, allowing for the prediction of experimentally observed patterns of cell cytoskeletal remodelling. Case study 2: Buckling of a coating from the compressive surface of a stent is simulated. It is demonstrated that during expansion of the stent the coating is initially compressed into the stent surface, while simultaneously undergoing tangential (shear) tractions at the coating-stent interface. It is demonstrated that when either the proposed NP1 or NP2 model is implemented at the stent-coating interface mixed-mode over-closure is correctly penalised. Further expansion of the stent results in the prediction of significant buckling of the coating from the stent surface, as observed experimentally. In contrast, the BSG model does not correctly penalise mixed-mode over-closure at the stent-coating interface, significantly altering the stress state in the coating and preventing the prediction of buckling. Case study 3: Application of a displacement to the base of a bi-layered composite arch results in a symmetric sinusoidal distribution of normal and tangential traction at the arch interface. The traction defined mode mixity at the interface ranges from pure mode II at the base of the arch to pure mode I at the top of the arch. It is demonstrated that predicted debonding patterns are highly sensitive to normal-tangential coupling terms in a CZM. The NP2, XN, and BSG models exhibit a strong bias towards mode I separation at the top of the arch, while the NP1 model exhibits a bias towards mode II debonding at the base of the arch. Only the SMC model provides mode-independent behaviour in the early stages of debonding. This case study provides a practical example of the importance of the behaviour of CZMs under conditions of traction controlled mode mixity, following from the theoretical analysis presented in Part I of this study.