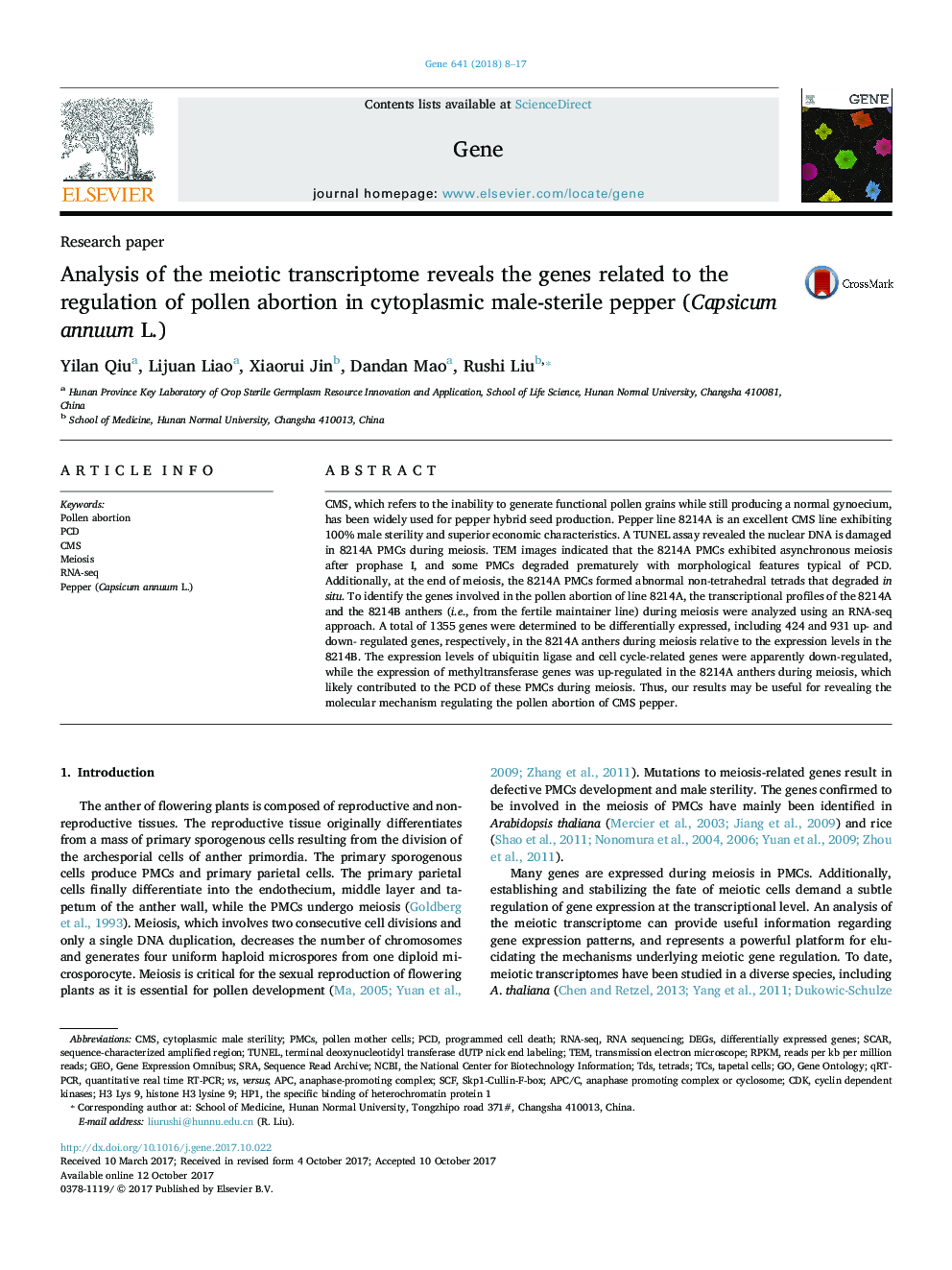 چکیده انگلیسی
CMS, which refers to the inability to generate functional pollen grains while still producing a normal gynoecium, has been widely used for pepper hybrid seed production. Pepper line 8214A is an excellent CMS line exhibiting 100% male sterility and superior economic characteristics. A TUNEL assay revealed the nuclear DNA is damaged in 8214A PMCs during meiosis. TEM images indicated that the 8214A PMCs exhibited asynchronous meiosis after prophase I, and some PMCs degraded prematurely with morphological features typical of PCD. Additionally, at the end of meiosis, the 8214A PMCs formed abnormal non-tetrahedral tetrads that degraded in situ. To identify the genes involved in the pollen abortion of line 8214A, the transcriptional profiles of the 8214A and the 8214B anthers (i.e., from the fertile maintainer line) during meiosis were analyzed using an RNA-seq approach. A total of 1355 genes were determined to be differentially expressed, including 424 and 931 up- and down- regulated genes, respectively, in the 8214A anthers during meiosis relative to the expression levels in the 8214B. The expression levels of ubiquitin ligase and cell cycle-related genes were apparently down-regulated, while the expression of methyltransferase genes was up-regulated in the 8214A anthers during meiosis, which likely contributed to the PCD of these PMCs during meiosis. Thus, our results may be useful for revealing the molecular mechanism regulating the pollen abortion of CMS pepper.
ناشر
Database: Elsevier - ScienceDirect (ساینس دایرکت)
Journal: Gene - Volume 641, 30 January 2018, Pages 8-17
نویسندگان
Yilan Qiu, Lijuan Liao, Xiaorui Jin, Dandan Mao, Rushi Liu,
دانلود مقاله + سفارش ترجمه
دانلود مقاله ISI انگلیسی
رایگان برای ایرانیان
سفارش ترجمه تخصصی
با تضمین قیمت و کیفیت
منتشر شده در