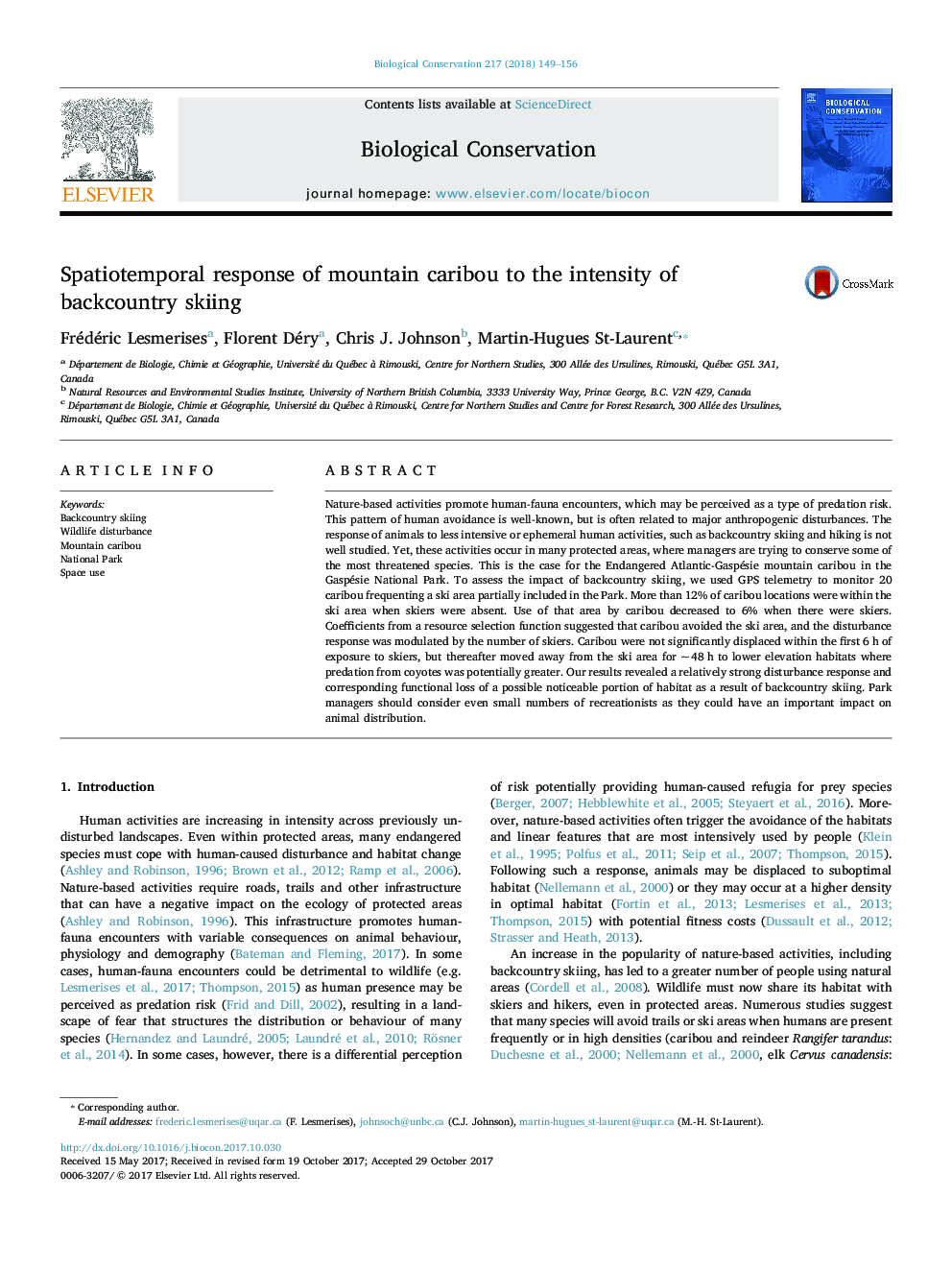 چکیده انگلیسی
Nature-based activities promote human-fauna encounters, which may be perceived as a type of predation risk. This pattern of human avoidance is well-known, but is often related to major anthropogenic disturbances. The response of animals to less intensive or ephemeral human activities, such as backcountry skiing and hiking is not well studied. Yet, these activities occur in many protected areas, where managers are trying to conserve some of the most threatened species. This is the case for the Endangered Atlantic-Gaspésie mountain caribou in the Gaspésie National Park. To assess the impact of backcountry skiing, we used GPS telemetry to monitor 20 caribou frequenting a ski area partially included in the Park. More than 12% of caribou locations were within the ski area when skiers were absent. Use of that area by caribou decreased to 6% when there were skiers. Coefficients from a resource selection function suggested that caribou avoided the ski area, and the disturbance response was modulated by the number of skiers. Caribou were not significantly displaced within the first 6Â h of exposure to skiers, but thereafter moved away from the ski area for ~Â 48Â h to lower elevation habitats where predation from coyotes was potentially greater. Our results revealed a relatively strong disturbance response and corresponding functional loss of a possible noticeable portion of habitat as a result of backcountry skiing. Park managers should consider even small numbers of recreationists as they could have an important impact on animal distribution.
ناشر
Database: Elsevier - ScienceDirect (ساینس دایرکت)
Journal: Biological Conservation - Volume 217, January 2018, Pages 149-156
نویسندگان
Frédéric Lesmerises, Florent Déry, Chris J. Johnson, Martin-Hugues St-Laurent,
دانلود مقاله + سفارش ترجمه
دانلود مقاله ISI انگلیسی
رایگان برای ایرانیان
سفارش ترجمه تخصصی
با تضمین قیمت و کیفیت
منتشر شده در