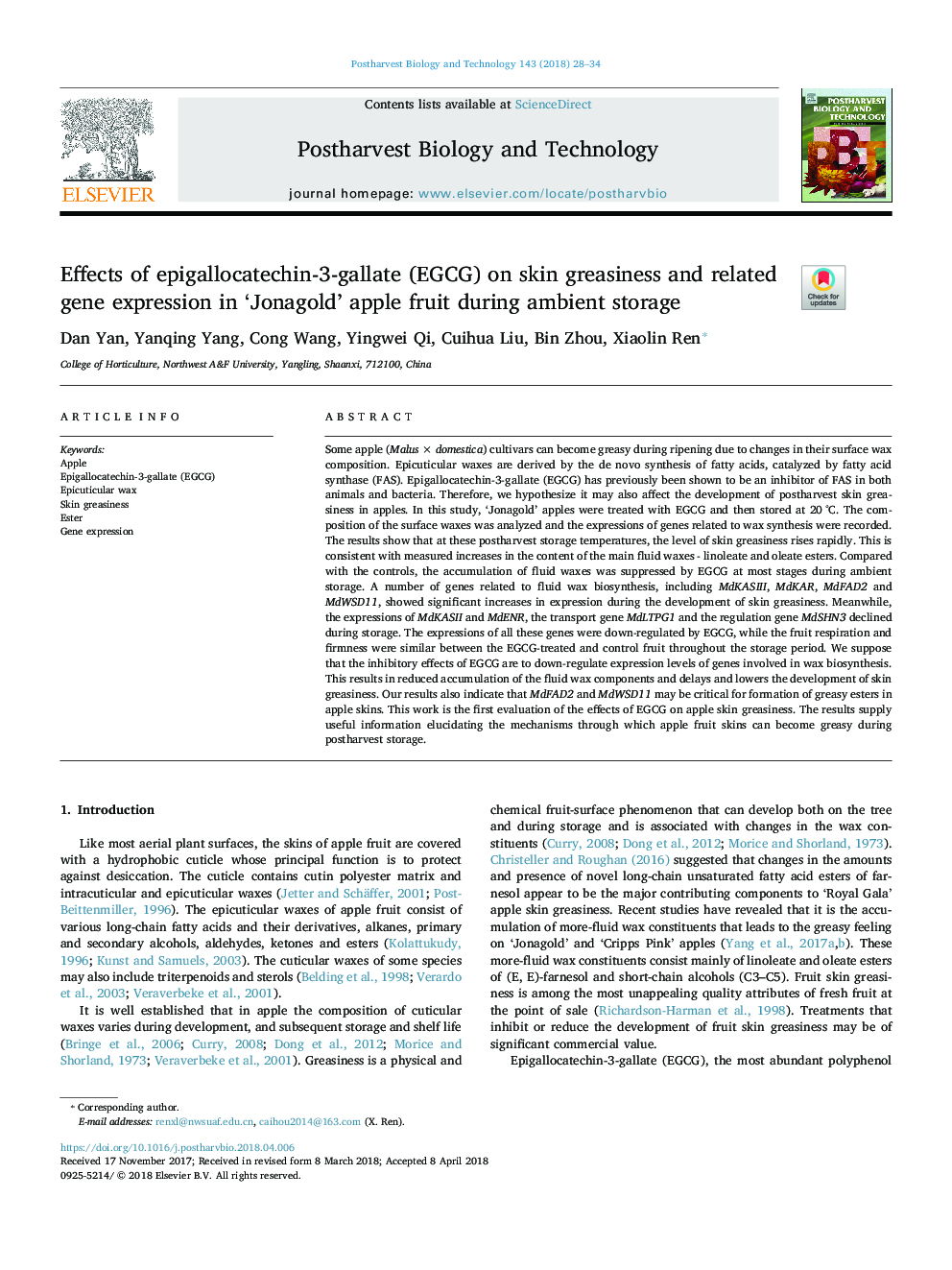 چکیده انگلیسی
Some apple (Malusâ¯Ãâ¯domestica) cultivars can become greasy during ripening due to changes in their surface wax composition. Epicuticular waxes are derived by the de novo synthesis of fatty acids, catalyzed by fatty acid synthase (FAS). Epigallocatechin-3-gallate (EGCG) has previously been shown to be an inhibitor of FAS in both animals and bacteria. Therefore, we hypothesize it may also affect the development of postharvest skin greasiness in apples. In this study, 'Jonagold' apples were treated with EGCG and then stored at 20â¯Â°C. The composition of the surface waxes was analyzed and the expressions of genes related to wax synthesis were recorded. The results show that at these postharvest storage temperatures, the level of skin greasiness rises rapidly. This is consistent with measured increases in the content of the main fluid waxes - linoleate and oleate esters. Compared with the controls, the accumulation of fluid waxes was suppressed by EGCG at most stages during ambient storage. A number of genes related to fluid wax biosynthesis, including MdKASIII, MdKAR, MdFAD2 and MdWSD11, showed significant increases in expression during the development of skin greasiness. Meanwhile, the expressions of MdKASII and MdENR, the transport gene MdLTPG1 and the regulation gene MdSHN3 declined during storage. The expressions of all these genes were down-regulated by EGCG, while the fruit respiration and firmness were similar between the EGCG-treated and control fruit throughout the storage period. We suppose that the inhibitory effects of EGCG are to down-regulate expression levels of genes involved in wax biosynthesis. This results in reduced accumulation of the fluid wax components and delays and lowers the development of skin greasiness. Our results also indicate that MdFAD2 and MdWSD11 may be critical for formation of greasy esters in apple skins. This work is the first evaluation of the effects of EGCG on apple skin greasiness. The results supply useful information elucidating the mechanisms through which apple fruit skins can become greasy during postharvest storage.
ناشر
Database: Elsevier - ScienceDirect (ساینس دایرکت)
Journal: Postharvest Biology and Technology - Volume 143, September 2018, Pages 28-34
نویسندگان
Dan Yan, Yanqing Yang, Cong Wang, Yingwei Qi, Cuihua Liu, Bin Zhou, Xiaolin Ren,
دانلود مقاله + سفارش ترجمه
دانلود مقاله ISI انگلیسی
رایگان برای ایرانیان
سفارش ترجمه تخصصی
با تضمین قیمت و کیفیت
منتشر شده در