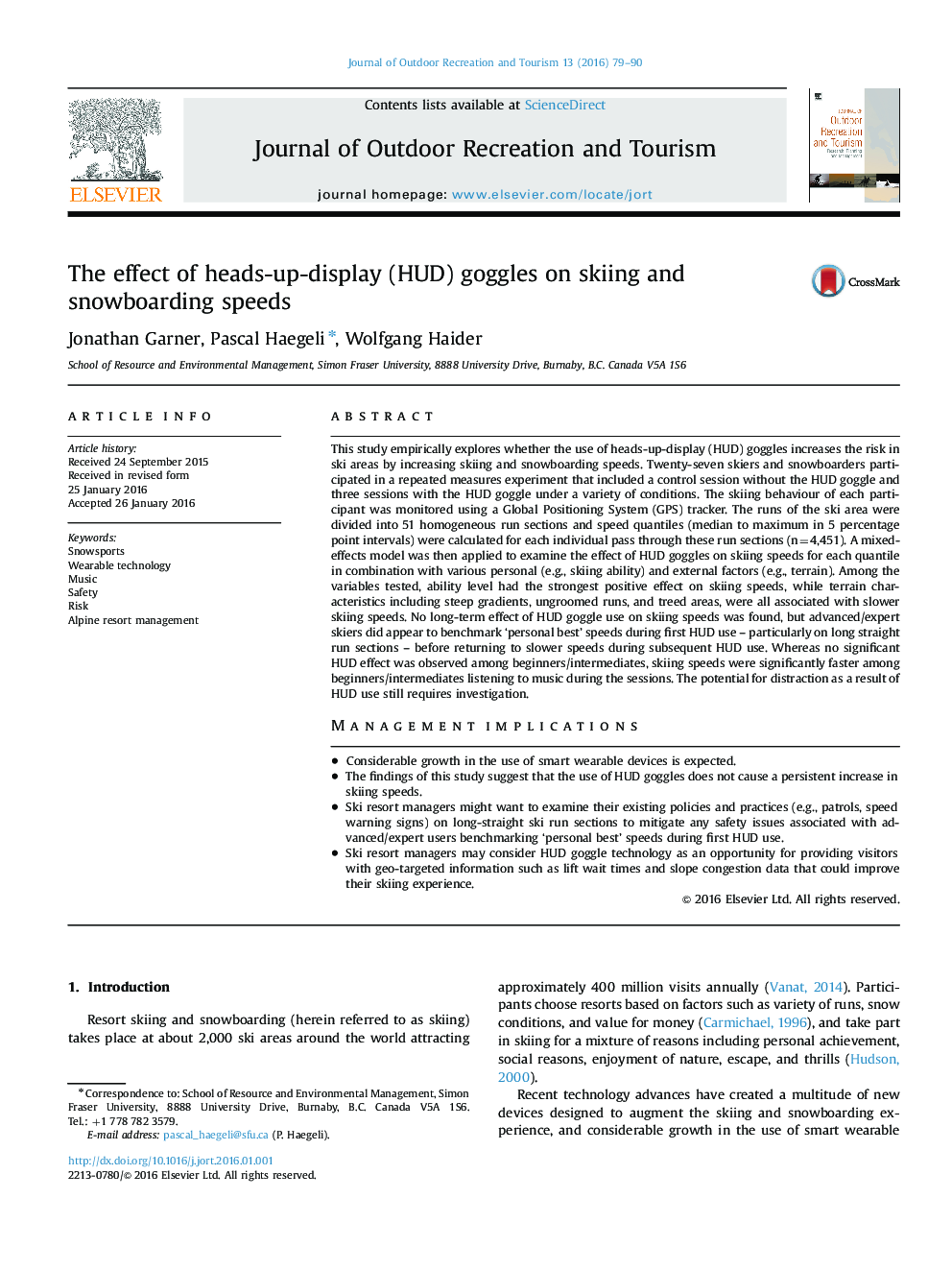 This study empirically explores whether the use of heads-up-display (HUD) goggles increases the risk in ski areas by increasing skiing and snowboarding speeds. Twenty-seven skiers and snowboarders participated in a repeated measures experiment that included a control session without the HUD goggle and three sessions with the HUD goggle under a variety of conditions. The skiing behaviour of each participant was monitored using a Global Positioning System (GPS) tracker. The runs of the ski area were divided into 51 homogeneous run sections and speed quantiles (median to maximum in 5 percentage point intervals) were calculated for each individual pass through these run sections (n=4,451). A mixed-effects model was then applied to examine the effect of HUD goggles on skiing speeds for each quantile in combination with various personal (e.g., skiing ability) and external factors (e.g., terrain). Among the variables tested, ability level had the strongest positive effect on skiing speeds, while terrain characteristics including steep gradients, ungroomed runs, and treed areas, were all associated with slower skiing speeds. No long-term effect of HUD goggle use on skiing speeds was found, but advanced/expert skiers did appear to benchmark ‘personal best’ speeds during first HUD use – particularly on long straight run sections – before returning to slower speeds during subsequent HUD use. Whereas no significant HUD effect was observed among beginners/intermediates, skiing speeds were significantly faster among beginners/intermediates listening to music during the sessions. The potential for distraction as a result of HUD use still requires investigation.Management implications
• Considerable growth in the use of smart wearable devices is expected.
• The findings of this study suggest that the use of HUD goggles does not cause a persistent increase in skiing speeds.
• Ski resort managers might want to examine their existing policies and practices (e.g., patrols, speed warning signs) on long-straight ski run sections to mitigate any safety issues associated with advanced/expert users benchmarking ‘personal best’ speeds during first HUD use.
• Ski resort managers may consider HUD goggle technology as an opportunity for providing visitors with geo-targeted information such as lift wait times and slope congestion data that could improve their skiing experience.