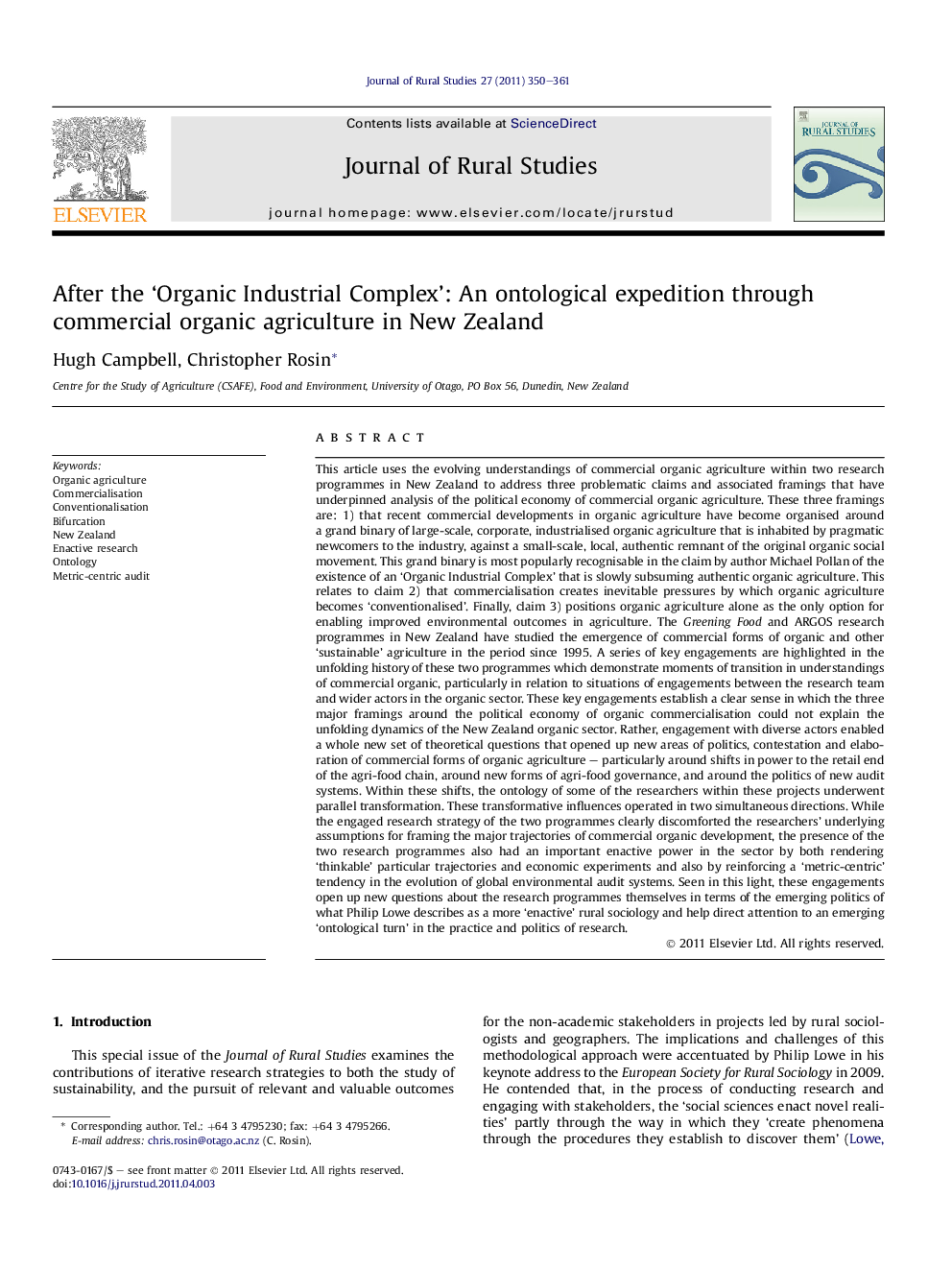 This article uses the evolving understandings of commercial organic agriculture within two research programmes in New Zealand to address three problematic claims and associated framings that have underpinned analysis of the political economy of commercial organic agriculture. These three framings are: 1) that recent commercial developments in organic agriculture have become organised around a grand binary of large-scale, corporate, industrialised organic agriculture that is inhabited by pragmatic newcomers to the industry, against a small-scale, local, authentic remnant of the original organic social movement. This grand binary is most popularly recognisable in the claim by author Michael Pollan of the existence of an ‘Organic Industrial Complex’ that is slowly subsuming authentic organic agriculture. This relates to claim 2) that commercialisation creates inevitable pressures by which organic agriculture becomes ‘conventionalised’. Finally, claim 3) positions organic agriculture alone as the only option for enabling improved environmental outcomes in agriculture. The Greening Food and ARGOS research programmes in New Zealand have studied the emergence of commercial forms of organic and other ‘sustainable’ agriculture in the period since 1995. A series of key engagements are highlighted in the unfolding history of these two programmes which demonstrate moments of transition in understandings of commercial organic, particularly in relation to situations of engagements between the research team and wider actors in the organic sector. These key engagements establish a clear sense in which the three major framings around the political economy of organic commercialisation could not explain the unfolding dynamics of the New Zealand organic sector. Rather, engagement with diverse actors enabled a whole new set of theoretical questions that opened up new areas of politics, contestation and elaboration of commercial forms of organic agriculture – particularly around shifts in power to the retail end of the agri-food chain, around new forms of agri-food governance, and around the politics of new audit systems. Within these shifts, the ontology of some of the researchers within these projects underwent parallel transformation. These transformative influences operated in two simultaneous directions. While the engaged research strategy of the two programmes clearly discomforted the researchers’ underlying assumptions for framing the major trajectories of commercial organic development, the presence of the two research programmes also had an important enactive power in the sector by both rendering ‘thinkable’ particular trajectories and economic experiments and also by reinforcing a ‘metric-centric’ tendency in the evolution of global environmental audit systems. Seen in this light, these engagements open up new questions about the research programmes themselves in terms of the emerging politics of what Philip Lowe describes as a more ‘enactive’ rural sociology and help direct attention to an emerging ‘ontological turn’ in the practice and politics of research.