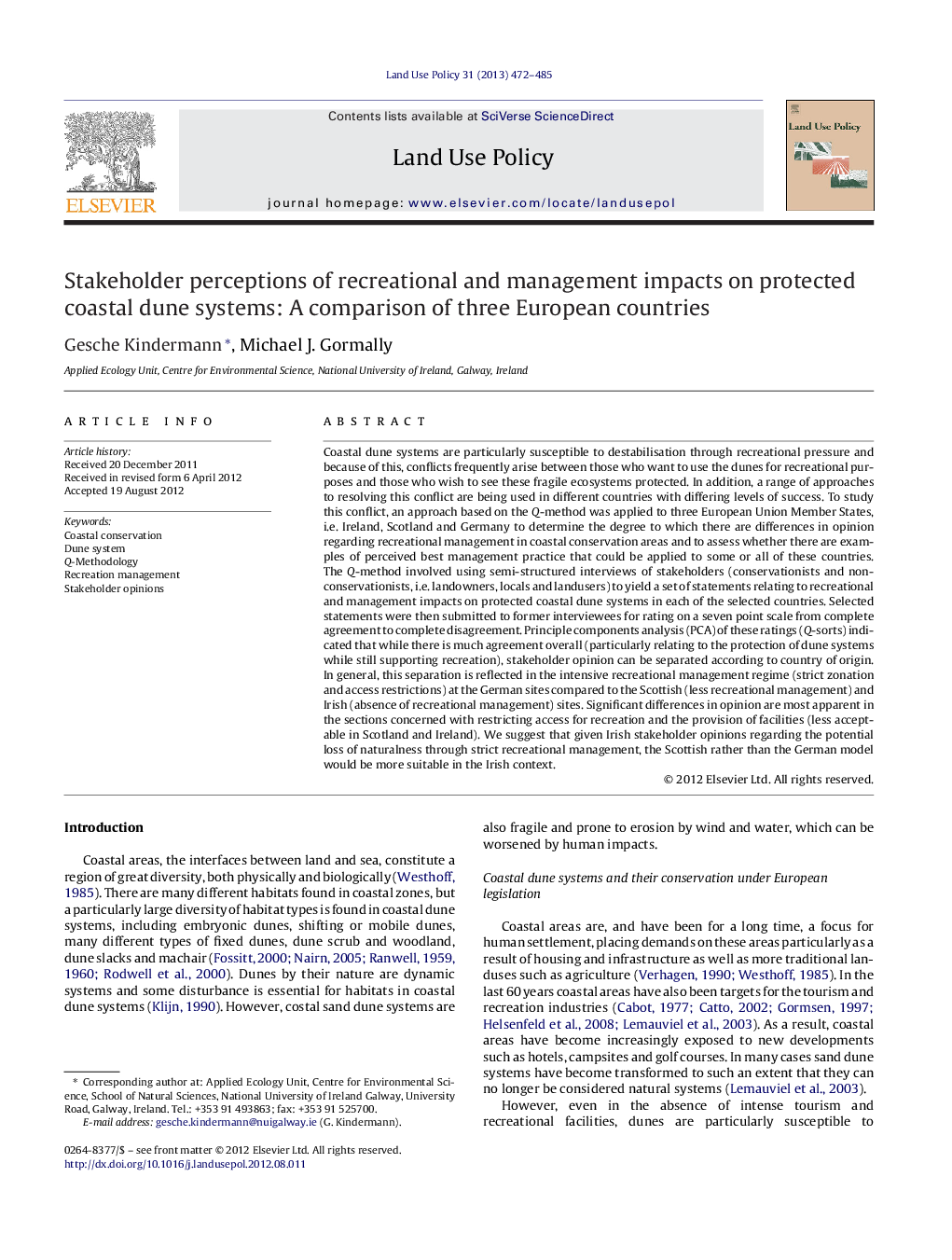 Coastal dune systems are particularly susceptible to destabilisation through recreational pressure and because of this, conflicts frequently arise between those who want to use the dunes for recreational purposes and those who wish to see these fragile ecosystems protected. In addition, a range of approaches to resolving this conflict are being used in different countries with differing levels of success. To study this conflict, an approach based on the Q-method was applied to three European Union Member States, i.e. Ireland, Scotland and Germany to determine the degree to which there are differences in opinion regarding recreational management in coastal conservation areas and to assess whether there are examples of perceived best management practice that could be applied to some or all of these countries. The Q-method involved using semi-structured interviews of stakeholders (conservationists and non-conservationists, i.e. landowners, locals and landusers) to yield a set of statements relating to recreational and management impacts on protected coastal dune systems in each of the selected countries. Selected statements were then submitted to former interviewees for rating on a seven point scale from complete agreement to complete disagreement. Principle components analysis (PCA) of these ratings (Q-sorts) indicated that while there is much agreement overall (particularly relating to the protection of dune systems while still supporting recreation), stakeholder opinion can be separated according to country of origin. In general, this separation is reflected in the intensive recreational management regime (strict zonation and access restrictions) at the German sites compared to the Scottish (less recreational management) and Irish (absence of recreational management) sites. Significant differences in opinion are most apparent in the sections concerned with restricting access for recreation and the provision of facilities (less acceptable in Scotland and Ireland). We suggest that given Irish stakeholder opinions regarding the potential loss of naturalness through strict recreational management, the Scottish rather than the German model would be more suitable in the Irish context.

► Stakeholder opinions separate according to nationality.
► The separation is reflected in the intensive recreational management regime.
► Differences are most significant in relation to access and facility provision.
► The Scottish rather than the German model is more suitable in the Irish context.