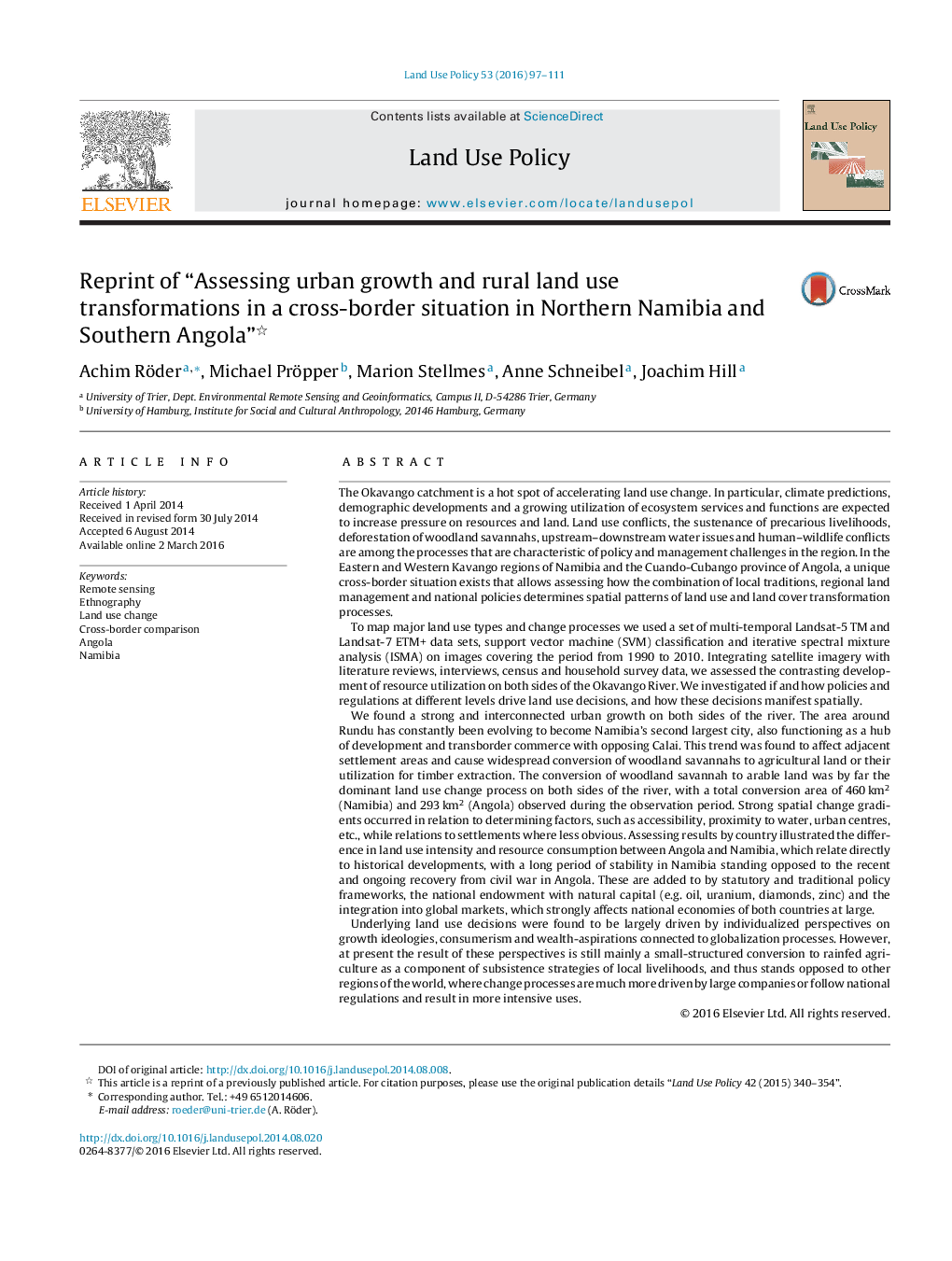 The Okavango catchment is a hot spot of accelerating land use change. In particular, climate predictions, demographic developments and a growing utilization of ecosystem services and functions are expected to increase pressure on resources and land. Land use conflicts, the sustenance of precarious livelihoods, deforestation of woodland savannahs, upstream–downstream water issues and human–wildlife conflicts are among the processes that are characteristic of policy and management challenges in the region. In the Eastern and Western Kavango regions of Namibia and the Cuando-Cubango province of Angola, a unique cross-border situation exists that allows assessing how the combination of local traditions, regional land management and national policies determines spatial patterns of land use and land cover transformation processes.To map major land use types and change processes we used a set of multi-temporal Landsat-5 TM and Landsat-7 ETM+ data sets, support vector machine (SVM) classification and iterative spectral mixture analysis (ISMA) on images covering the period from 1990 to 2010. Integrating satellite imagery with literature reviews, interviews, census and household survey data, we assessed the contrasting development of resource utilization on both sides of the Okavango River. We investigated if and how policies and regulations at different levels drive land use decisions, and how these decisions manifest spatially.We found a strong and interconnected urban growth on both sides of the river. The area around Rundu has constantly been evolving to become Namibia's second largest city, also functioning as a hub of development and transborder commerce with opposing Calai. This trend was found to affect adjacent settlement areas and cause widespread conversion of woodland savannahs to agricultural land or their utilization for timber extraction. The conversion of woodland savannah to arable land was by far the dominant land use change process on both sides of the river, with a total conversion area of 460 km2 (Namibia) and 293 km2 (Angola) observed during the observation period. Strong spatial change gradients occurred in relation to determining factors, such as accessibility, proximity to water, urban centres, etc., while relations to settlements where less obvious. Assessing results by country illustrated the difference in land use intensity and resource consumption between Angola and Namibia, which relate directly to historical developments, with a long period of stability in Namibia standing opposed to the recent and ongoing recovery from civil war in Angola. These are added to by statutory and traditional policy frameworks, the national endowment with natural capital (e.g. oil, uranium, diamonds, zinc) and the integration into global markets, which strongly affects national economies of both countries at large.Underlying land use decisions were found to be largely driven by individualized perspectives on growth ideologies, consumerism and wealth-aspirations connected to globalization processes. However, at present the result of these perspectives is still mainly a small-structured conversion to rainfed agriculture as a component of subsistence strategies of local livelihoods, and thus stands opposed to other regions of the world, where change processes are much more driven by large companies or follow national regulations and result in more intensive uses.