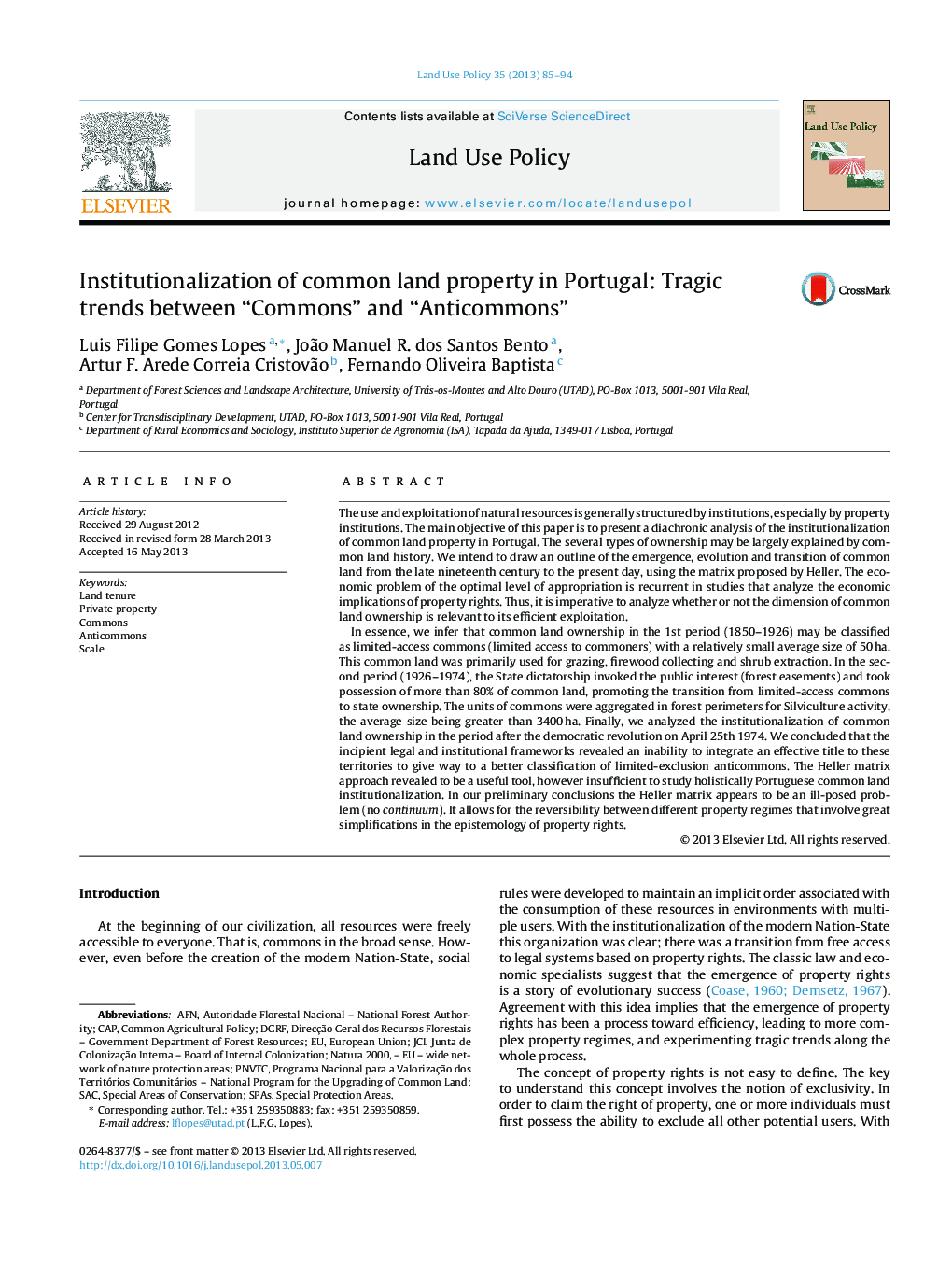 • We analyze common land property institutionalization in Portugal from 1850 to post 1974.
• We based our analysis using the matrix proposed by Heller.
• The existing legal framework is unable to integrate a title to these territories.
• These territories can better be classified as limited-exclusion anticommons.

The use and exploitation of natural resources is generally structured by institutions, especially by property institutions. The main objective of this paper is to present a diachronic analysis of the institutionalization of common land property in Portugal. The several types of ownership may be largely explained by common land history. We intend to draw an outline of the emergence, evolution and transition of common land from the late nineteenth century to the present day, using the matrix proposed by Heller. The economic problem of the optimal level of appropriation is recurrent in studies that analyze the economic implications of property rights. Thus, it is imperative to analyze whether or not the dimension of common land ownership is relevant to its efficient exploitation.In essence, we infer that common land ownership in the 1st period (1850–1926) may be classified as limited-access commons (limited access to commoners) with a relatively small average size of 50 ha. This common land was primarily used for grazing, firewood collecting and shrub extraction. In the second period (1926–1974), the State dictatorship invoked the public interest (forest easements) and took possession of more than 80% of common land, promoting the transition from limited-access commons to state ownership. The units of commons were aggregated in forest perimeters for Silviculture activity, the average size being greater than 3400 ha. Finally, we analyzed the institutionalization of common land ownership in the period after the democratic revolution on April 25th 1974. We concluded that the incipient legal and institutional frameworks revealed an inability to integrate an effective title to these territories to give way to a better classification of limited-exclusion anticommons. The Heller matrix approach revealed to be a useful tool, however insufficient to study holistically Portuguese common land institutionalization. In our preliminary conclusions the Heller matrix appears to be an ill-posed problem (no continuum). It allows for the reversibility between different property regimes that involve great simplifications in the epistemology of property rights.