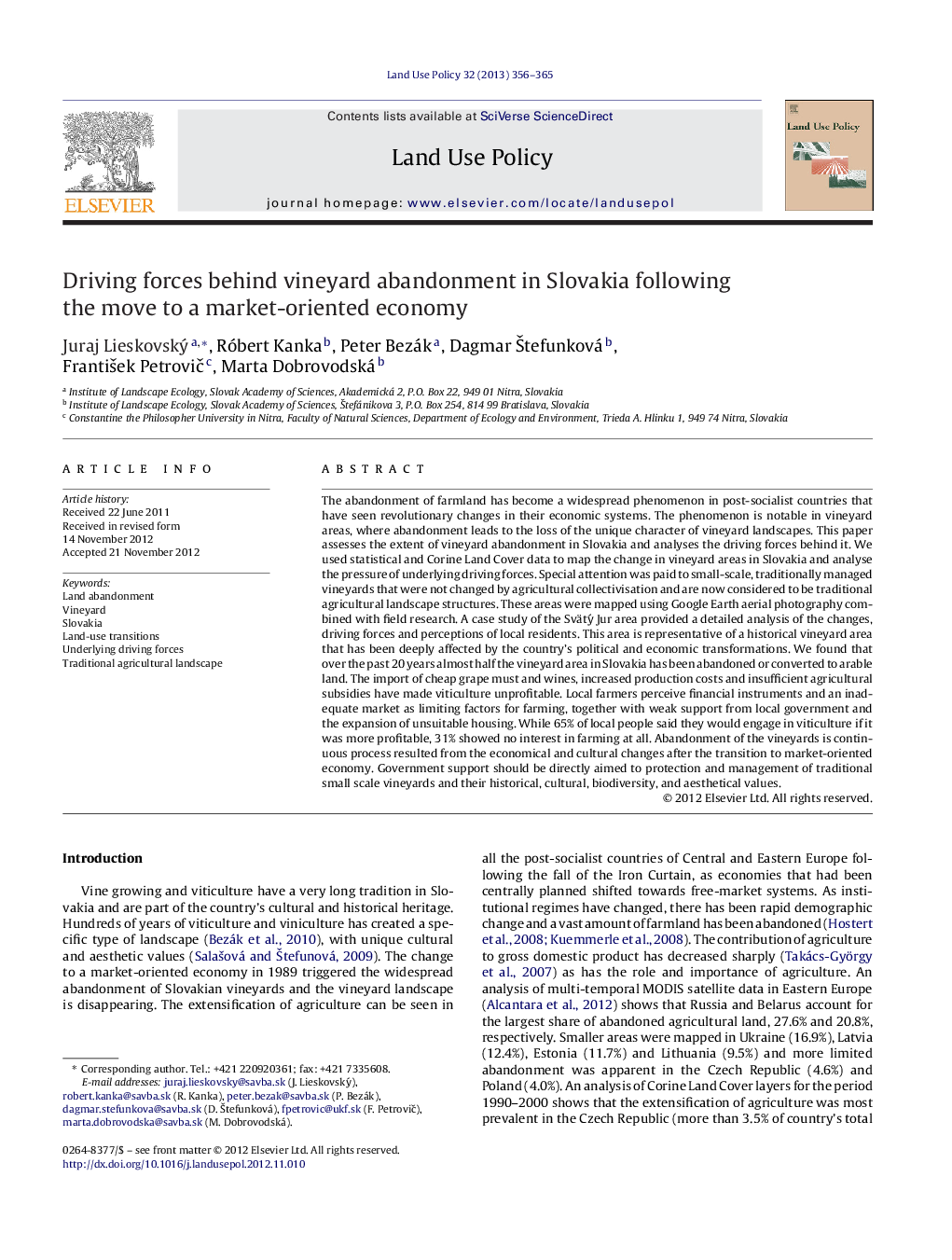 The abandonment of farmland has become a widespread phenomenon in post-socialist countries that have seen revolutionary changes in their economic systems. The phenomenon is notable in vineyard areas, where abandonment leads to the loss of the unique character of vineyard landscapes. This paper assesses the extent of vineyard abandonment in Slovakia and analyses the driving forces behind it. We used statistical and Corine Land Cover data to map the change in vineyard areas in Slovakia and analyse the pressure of underlying driving forces. Special attention was paid to small-scale, traditionally managed vineyards that were not changed by agricultural collectivisation and are now considered to be traditional agricultural landscape structures. These areas were mapped using Google Earth aerial photography combined with field research. A case study of the Svätý Jur area provided a detailed analysis of the changes, driving forces and perceptions of local residents. This area is representative of a historical vineyard area that has been deeply affected by the country's political and economic transformations. We found that over the past 20 years almost half the vineyard area in Slovakia has been abandoned or converted to arable land. The import of cheap grape must and wines, increased production costs and insufficient agricultural subsidies have made viticulture unprofitable. Local farmers perceive financial instruments and an inadequate market as limiting factors for farming, together with weak support from local government and the expansion of unsuitable housing. While 65% of local people said they would engage in viticulture if it was more profitable, 31% showed no interest in farming at all. Abandonment of the vineyards is continuous process resulted from the economical and cultural changes after the transition to market-oriented economy. Government support should be directly aimed to protection and management of traditional small scale vineyards and their historical, cultural, biodiversity, and aesthetical values.

Figure optionsDownload as PowerPoint slideHighlights
► The area of managed vineyards in Slovakia has decreased from 30,988 ha in 1989 to 15,558 ha in 2010.
► Most of the vineyard area has been transformed into arable land.
► Import of grape must and wines, increased production costs and insufficient agricultural subsidies made the vine growing unprofitable.
► Winegrowers perceive financial instruments and inadequate markets as main limiting factors for farming development.