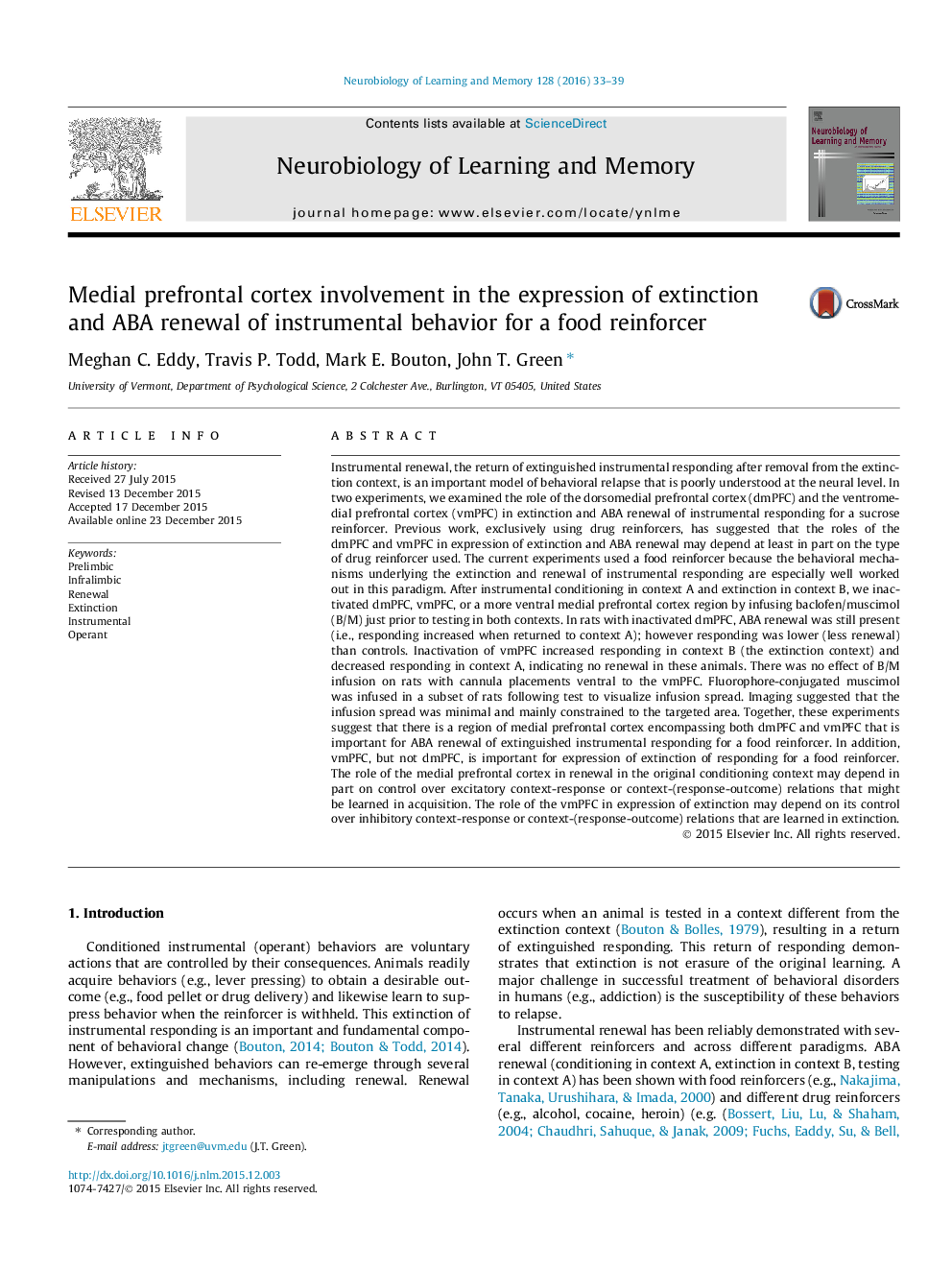 Instrumental renewal, the return of extinguished instrumental responding after removal from the extinction context, is an important model of behavioral relapse that is poorly understood at the neural level. In two experiments, we examined the role of the dorsomedial prefrontal cortex (dmPFC) and the ventromedial prefrontal cortex (vmPFC) in extinction and ABA renewal of instrumental responding for a sucrose reinforcer. Previous work, exclusively using drug reinforcers, has suggested that the roles of the dmPFC and vmPFC in expression of extinction and ABA renewal may depend at least in part on the type of drug reinforcer used. The current experiments used a food reinforcer because the behavioral mechanisms underlying the extinction and renewal of instrumental responding are especially well worked out in this paradigm. After instrumental conditioning in context A and extinction in context B, we inactivated dmPFC, vmPFC, or a more ventral medial prefrontal cortex region by infusing baclofen/muscimol (B/M) just prior to testing in both contexts. In rats with inactivated dmPFC, ABA renewal was still present (i.e., responding increased when returned to context A); however responding was lower (less renewal) than controls. Inactivation of vmPFC increased responding in context B (the extinction context) and decreased responding in context A, indicating no renewal in these animals. There was no effect of B/M infusion on rats with cannula placements ventral to the vmPFC. Fluorophore-conjugated muscimol was infused in a subset of rats following test to visualize infusion spread. Imaging suggested that the infusion spread was minimal and mainly constrained to the targeted area. Together, these experiments suggest that there is a region of medial prefrontal cortex encompassing both dmPFC and vmPFC that is important for ABA renewal of extinguished instrumental responding for a food reinforcer. In addition, vmPFC, but not dmPFC, is important for expression of extinction of responding for a food reinforcer. The role of the medial prefrontal cortex in renewal in the original conditioning context may depend in part on control over excitatory context-response or context-(response-outcome) relations that might be learned in acquisition. The role of the vmPFC in expression of extinction may depend on its control over inhibitory context-response or context-(response-outcome) relations that are learned in extinction.