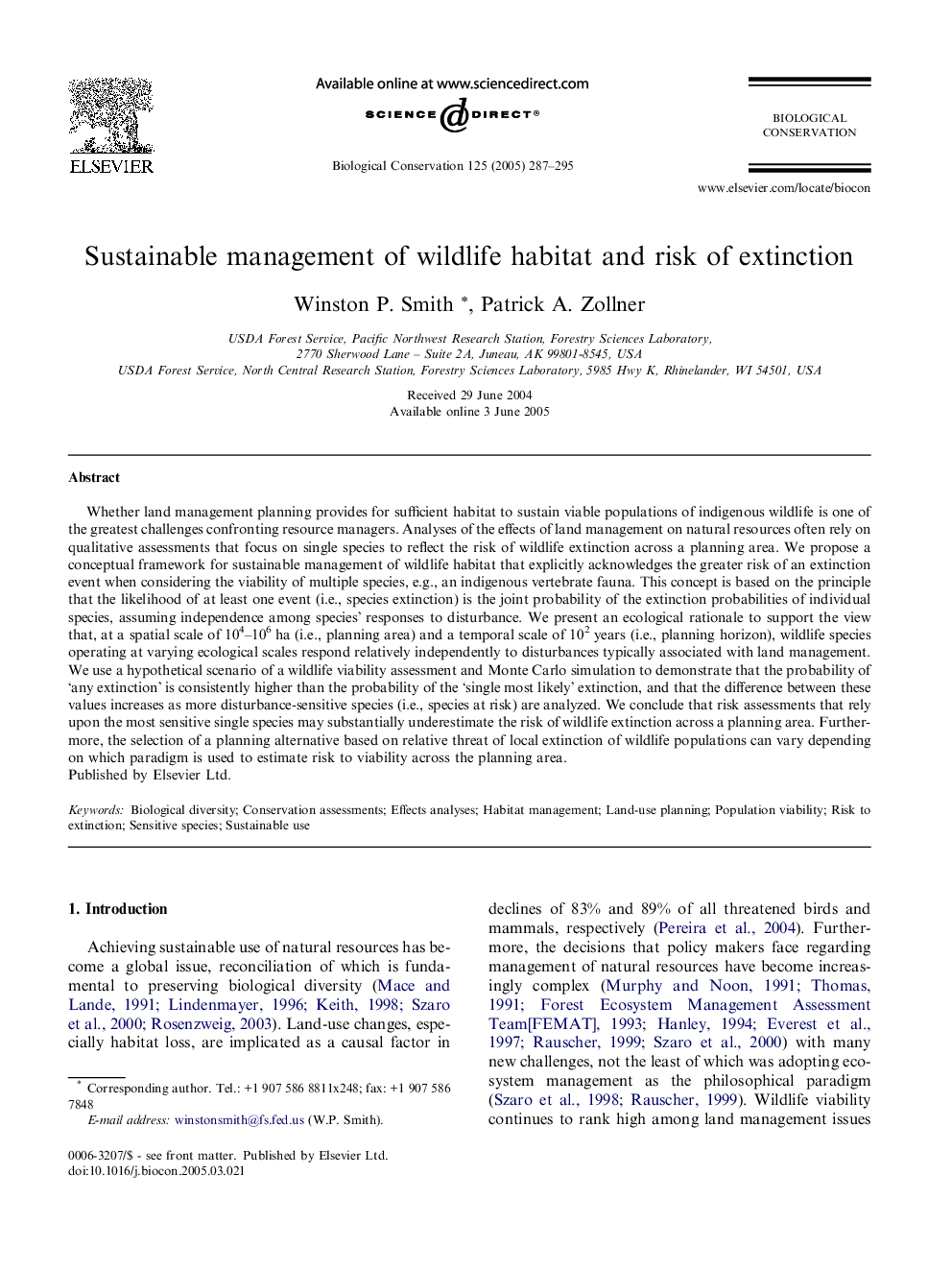 چکیده انگلیسی
Whether land management planning provides for sufficient habitat to sustain viable populations of indigenous wildlife is one of the greatest challenges confronting resource managers. Analyses of the effects of land management on natural resources often rely on qualitative assessments that focus on single species to reflect the risk of wildlife extinction across a planning area. We propose a conceptual framework for sustainable management of wildlife habitat that explicitly acknowledges the greater risk of an extinction event when considering the viability of multiple species, e.g., an indigenous vertebrate fauna. This concept is based on the principle that the likelihood of at least one event (i.e., species extinction) is the joint probability of the extinction probabilities of individual species, assuming independence among species' responses to disturbance. We present an ecological rationale to support the view that, at a spatial scale of 104-106Â ha (i.e., planning area) and a temporal scale of 102 years (i.e., planning horizon), wildlife species operating at varying ecological scales respond relatively independently to disturbances typically associated with land management. We use a hypothetical scenario of a wildlife viability assessment and Monte Carlo simulation to demonstrate that the probability of 'any extinction' is consistently higher than the probability of the 'single most likely' extinction, and that the difference between these values increases as more disturbance-sensitive species (i.e., species at risk) are analyzed. We conclude that risk assessments that rely upon the most sensitive single species may substantially underestimate the risk of wildlife extinction across a planning area. Furthermore, the selection of a planning alternative based on relative threat of local extinction of wildlife populations can vary depending on which paradigm is used to estimate risk to viability across the planning area.
ناشر
Database: Elsevier - ScienceDirect (ساینس دایرکت)
Journal: Biological Conservation - Volume 125, Issue 3, October 2005, Pages 287-295
نویسندگان
Winston P. Smith, Patrick A. Zollner,
دانلود مقاله + سفارش ترجمه
دانلود مقاله ISI انگلیسی
رایگان برای ایرانیان
سفارش ترجمه تخصصی
با تضمین قیمت و کیفیت
منتشر شده در