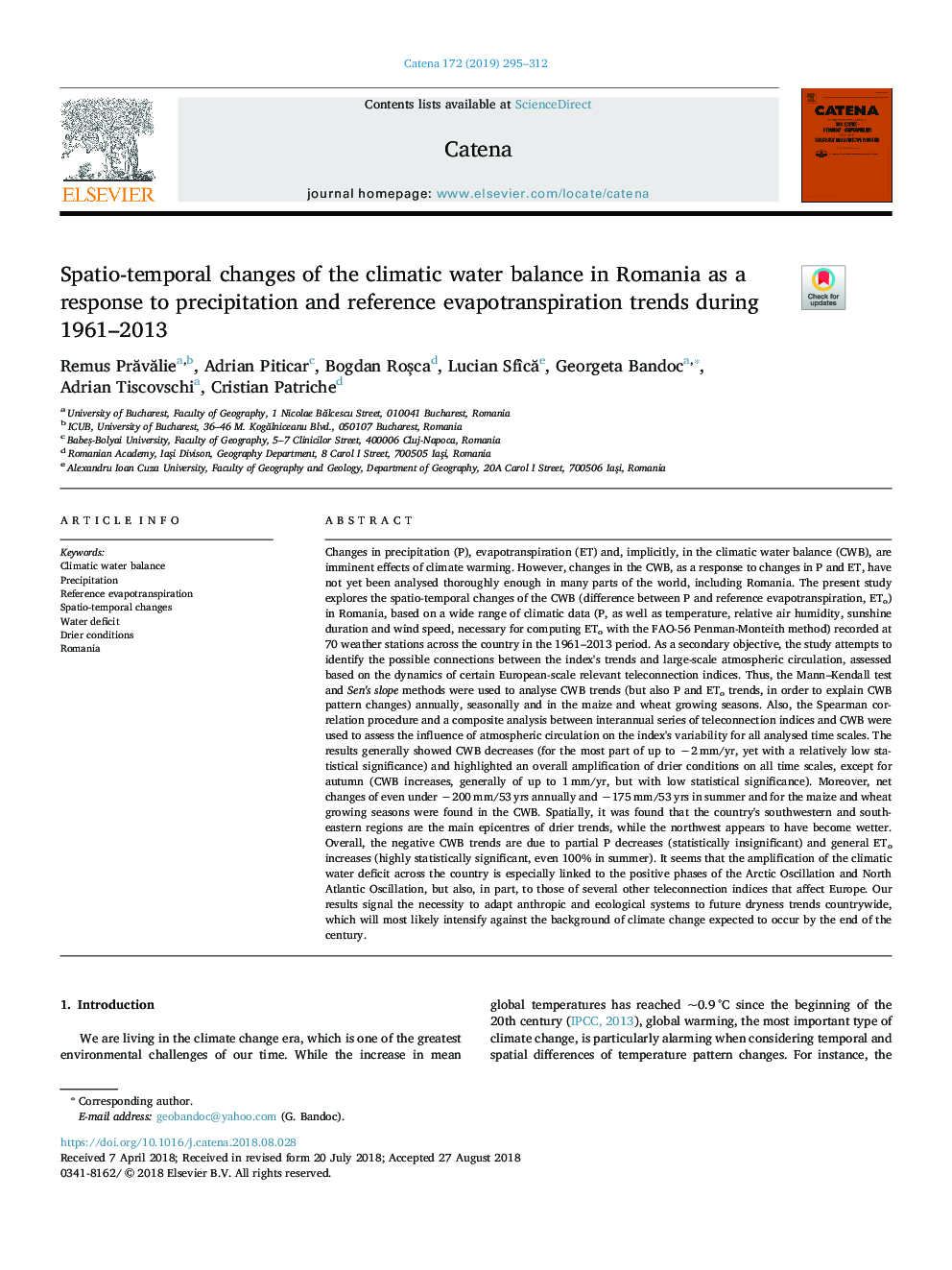 چکیده انگلیسی
Changes in precipitation (P), evapotranspiration (ET) and, implicitly, in the climatic water balance (CWB), are imminent effects of climate warming. However, changes in the CWB, as a response to changes in P and ET, have not yet been analysed thoroughly enough in many parts of the world, including Romania. The present study explores the spatio-temporal changes of the CWB (difference between P and reference evapotranspiration, ETo) in Romania, based on a wide range of climatic data (P, as well as temperature, relative air humidity, sunshine duration and wind speed, necessary for computing ETo with the FAO-56 Penman-Monteith method) recorded at 70 weather stations across the country in the 1961-2013 period. As a secondary objective, the study attempts to identify the possible connections between the index's trends and large-scale atmospheric circulation, assessed based on the dynamics of certain European-scale relevant teleconnection indices. Thus, the Mann-Kendall test and Sen's slope methods were used to analyse CWB trends (but also P and ETo trends, in order to explain CWB pattern changes) annually, seasonally and in the maize and wheat growing seasons. Also, the Spearman correlation procedure and a composite analysis between interannual series of teleconnection indices and CWB were used to assess the influence of atmospheric circulation on the index's variability for all analysed time scales. The results generally showed CWB decreases (for the most part of up to â2â¯mm/yr, yet with a relatively low statistical significance) and highlighted an overall amplification of drier conditions on all time scales, except for autumn (CWB increases, generally of up to 1â¯mm/yr, but with low statistical significance). Moreover, net changes of even under â200â¯mm/53â¯yrs annually and â175â¯mm/53â¯yrs in summer and for the maize and wheat growing seasons were found in the CWB. Spatially, it was found that the country's southwestern and southeastern regions are the main epicentres of drier trends, while the northwest appears to have become wetter. Overall, the negative CWB trends are due to partial P decreases (statistically insignificant) and general ETo increases (highly statistically significant, even 100% in summer). It seems that the amplification of the climatic water deficit across the country is especially linked to the positive phases of the Arctic Oscillation and North Atlantic Oscillation, but also, in part, to those of several other teleconnection indices that affect Europe. Our results signal the necessity to adapt anthropic and ecological systems to future dryness trends countrywide, which will most likely intensify against the background of climate change expected to occur by the end of the century.
ناشر
Database: Elsevier - ScienceDirect (ساینس دایرکت)
Journal: CATENA - Volume 172, January 2019, Pages 295-312
نویسندگان
Remus PrÄvÄlie, Adrian Piticar, Bogdan RoÈca, Lucian SfÃ®cÄ, Georgeta Bandoc, Adrian Tiscovschi, Cristian Patriche,
دانلود مقاله + سفارش ترجمه
دانلود مقاله ISI انگلیسی
رایگان برای ایرانیان
سفارش ترجمه تخصصی
با تضمین قیمت و کیفیت
منتشر شده در