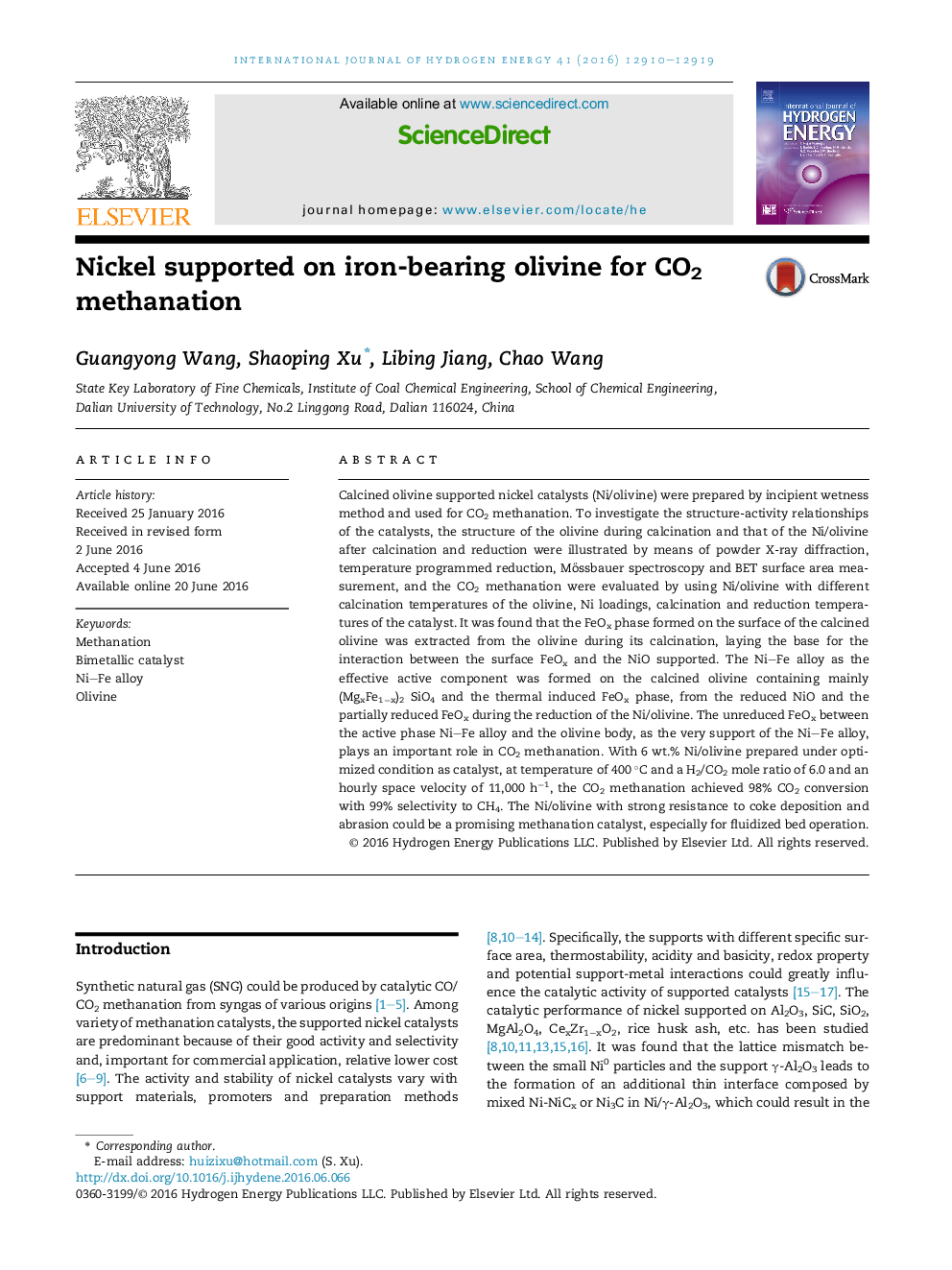 • Ni–Fe/olivine catalyst has been developed for CO2 methanation.
• Ni–Fe alloy was formed on the surface FeOx during reduction of the Ni/olivine.
• Ni–Fe/olivine with Ni/(Ni + Fe) ratio of around 0.75 showed better catalytic activity.

Calcined olivine supported nickel catalysts (Ni/olivine) were prepared by incipient wetness method and used for CO2 methanation. To investigate the structure-activity relationships of the catalysts, the structure of the olivine during calcination and that of the Ni/olivine after calcination and reduction were illustrated by means of powder X-ray diffraction, temperature programmed reduction, Mőssbauer spectroscopy and BET surface area measurement, and the CO2 methanation were evaluated by using Ni/olivine with different calcination temperatures of the olivine, Ni loadings, calcination and reduction temperatures of the catalyst. It was found that the FeOx phase formed on the surface of the calcined olivine was extracted from the olivine during its calcination, laying the base for the interaction between the surface FeOx and the NiO supported. The Ni–Fe alloy as the effective active component was formed on the calcined olivine containing mainly (MgxFe1−x)2 SiO4 and the thermal induced FeOx phase, from the reduced NiO and the partially reduced FeOx during the reduction of the Ni/olivine. The unreduced FeOx between the active phase Ni–Fe alloy and the olivine body, as the very support of the Ni–Fe alloy, plays an important role in CO2 methanation. With 6 wt.% Ni/olivine prepared under optimized condition as catalyst, at temperature of 400 °C and a H2/CO2 mole ratio of 6.0 and an hourly space velocity of 11,000 h−1, the CO2 methanation achieved 98% CO2 conversion with 99% selectivity to CH4. The Ni/olivine with strong resistance to coke deposition and abrasion could be a promising methanation catalyst, especially for fluidized bed operation.